“Divergent” star Shailene Woodley is comfortable in fictional dystopian societies, not so much with the potential collapse of American democracy as we know it. In a new video released by Funny or Die, Woodley joins other A-listers who share her concerns about the “alternative constitution” that seems to have found its way into Donald Trump’s tiny hands. And Susan Sarandon, Constance Wu, Amber Heard, and Lizzy Caplan and many more are there to back her up.

As Woodley says in her introduction, the video is a response to the so-called “Muslim Ban,” Trump’s executive order barring citizens of seven primarily Muslim countries from entering the United States. With people tripping over themselves wondering if the ban is constitutional, Woodley and the gang have found the answer: “Historians have confirmed the existence of another constitution,” they say. Apparently, this constitution says: “They with cards of green should be kept away by any means, by wall, by force, or with magic beans.”

But that’s not all, the joke continues: Trump is also aware of an alternative statue of Liberty, a much smaller one, in his home borough of Queens. That one suggests that after you give her your poor, your tired, and your huddled masses, you detain them and send them back to “where you think they came from.” It also says, “Fear outsiders” over and over again, which Susan Sarandon turns into a rousing monologue.

Watch the star-studded sketch below:

Super Deluxe has developed a name with its bizarre and often political viral videos, but last week the company made a play for the Sundance Film Festival.

Three Super Deluxe projects played in Park City: “Bayard and Me,” a short documentary from Matt Wolf about civil rights leader Bayard Rustin and his adoption of his younger lover, long before same-sex marriage was legalized; “The Chances,” a short form comedy about two deaf best friends, directed by Anna Kerrigan; and “Deer Squad,” a short documentary profile of Kelvin Peña, a Pennsylvania high schooler who befriended a family of deer in his backyard.

Peña’s videos developed an online following big enough to get him recognized by the Uber driver tasked with getting him to Park City in time for his Sundance debut. The film was part of the documentary shorts section, and screened before Sydney Freeland’s “Deidra & Laney Rob a Train.”

In the film, Peña explains the genesis of his special relationship with animals. “I named [the deer] Money, just straight off the dome,” he says. “It was the first thing that came to my mind, ’cause I love money and I felt like I loved the deer. I was like, man, this is lit.”

When fans suggested Peña feed the deer healthier foods, he switched it up from powdered donuts. “Organic freshly cut fruits for them, man. Everybody eats.” This last sentiment has become the Deer Squad catchphrase, and Peña sports an “Everybody Eats” hat throughout the film.

“The day after he started going viral, we sent him an email and shot with him a few days later,” said Scott J. Ross, who directed the film for Super Deluxe with his Public Cinema Club co-founders Pipus Larsen and Kenneth Gug. “I just thought, ‘If we don’t go find him now, then somebody else will probably do it.’ He’s got such a vibrant personality.”

Turner Entertainment first launched Super Deluxe in January 2007 as an ad-supported website for edgy humor, aimed at the 18-34 male demo, but folded Super Deluxe into Adult Swim 18 months later. Turner quietly began to revive the brand in September 2015. It’s led by Wolfgang Hammer, the former CBS Films president who, while a director at Media Rights Capital, developed “House of Cards” before selling it to Netflix.

“It was always intended to be set up very differently from the way everything else is set up,” Hammer said. “It was always intended to be a studio in the truest sense of the word. A company that produces for every single format from the very beginning. It’s not easier to make internet videos — it’s actually quite difficult. But it’s easier from a production perspective, obviously.”

READ MORE: How I Learned To Stop Worrying And Love Sundance Hype

Hammer is careful to distinguish viral videos from the television series and films under development at Super Deluxe, although he admits to wanting to meet younger audiences where they are watching. “Younger generations are not watching in traditional ways,” he said. “It seems silly to confine yourself to one distribution medium.”

That said, the company’s name recognition is largely gained from the viral videos, which should go a long way toward piquing interest in a 15-minute civil rights documentary like “Bayard and Me.” Hammer is proud to offer that variety. “Show me a digital publisher that has pieces in competition at Sundance,” he said. “You can’t point to one.”

Even Peña has to admit he never thought he’d end up at Sundance. For his trip to Park City, Super Deluxe handed their Snapchat account to the teenager who calls himself “the Dominican Snow White.” The resulting compilation plays out like a comedy of errors worthy of its own Sundance slot. Check it out to get an idea of what a SuperDeluxe video is all about:

I have always been fascinated by movies as engaging visual stories.

For some reason, I started studying Italian as a side interest in NY’s Greenwich Village.

Wow! It was like wearing VR glasses with different cultural lenses to see the world.

I started watching Italian films and bringing up ideas in my advanced language classes.

Somebody mentioned, hey why don’t you arrange a screening for the class?

I did. And for a full year in San Diego, I curated a monthly screening of classic films.

Right after I moved back to New York, I resumed my Italian cinema discussion classes.

I started cafePellicola.com a blog that is dedicated to celebrating fine Italian cinema.

The blog was great but I missed the direct interaction with the audience.

So, I produced film festivals that included movie introduction and post-screening Q&A.

Then Cafe Pellicola Live came along where I interviewed online Italian filmmakers and scholars.

During all that time, I was leading digital marketing programs in major corporations.

2 years ago, I relocated to Miami and explored ways to use my corporate experience.

4.6B daily content pieces and decreasing attention spans – was our call for adventure.

After researching the space, we developed a 9-step My Visual Story framework.

By which, we help businesses articulate, visualize, and spread their business stories.

Spreading the VSI gospel, we met great new people that saw what we saw.

One of them was Massimo Lico founder of ML Visual Storytelling agency in Rome, Italy. 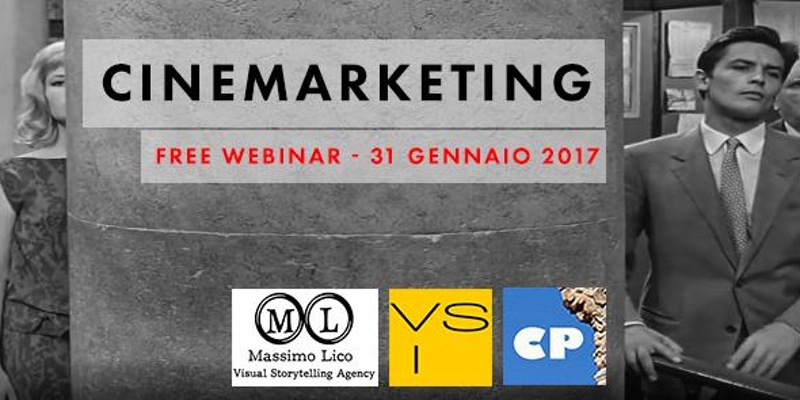 As part of VSI’s global outreach, we found an exciting common ground.

We’re launching a new Webinar program that nicely ties together this one-line narrative.

On 1/31/17, we’ll introduce an innovative model that truly leverages my 2 passions:

English version of this Webinar will be announced later.

If you have Italian-speaking friends or colleagues, please share. Register for FREE here.

So what is the big lesson from this yarn, you ask?

Pay attention to your side hustles as that’s where your BIG STORY is waiting!