Not so far from the end of 2020. It has been a challenge we have never seen and lived in. A year full of disappointment, social distancing, and the unknown future. Many kids end up doing school remotely, parents and people working from home, frontline workers are continuously saving life and putting their own lives in danger. The elderly population restraints in isolation to reduce the chances of spread, business closures resulted in many families living in poverty. And traveling got us to dream about those days when we will able to travel again, the only moment we could escape the routine is taking away from us.

We all have been daydreaming about these particular ingredients from that city, the street that led us to a historic place, people we met along the way, up and downs of the trip made us craving for more. The little comfort we get to is digging up those memories and got lost in our memories of those moments.

This series of ‘Traveling around food series’ from Andrew Nye is well thought, nicely executed, and satisfying. Andrew is a vector image-maker and brand designer in Manchester, UK. A big supporter of gradients, coffee, and gentle pigeon. Follow him for more awesome artworks on Instagram or his Website. 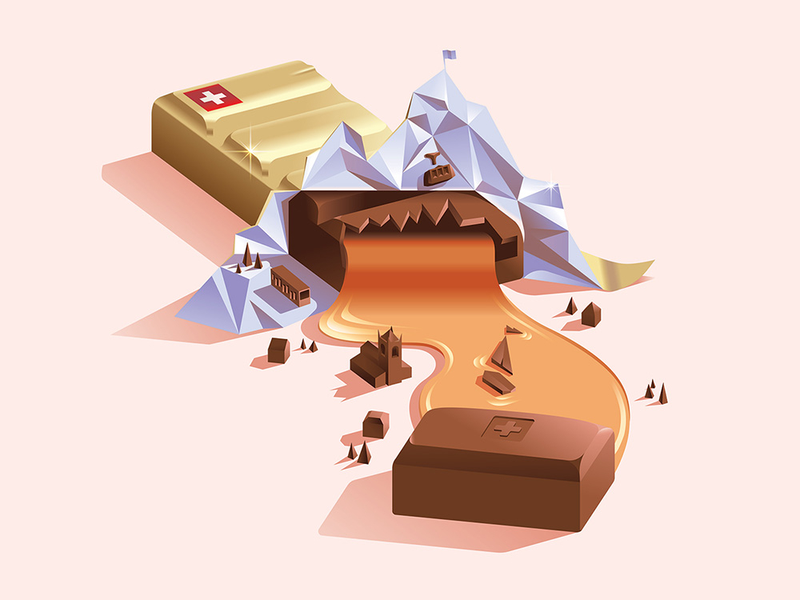 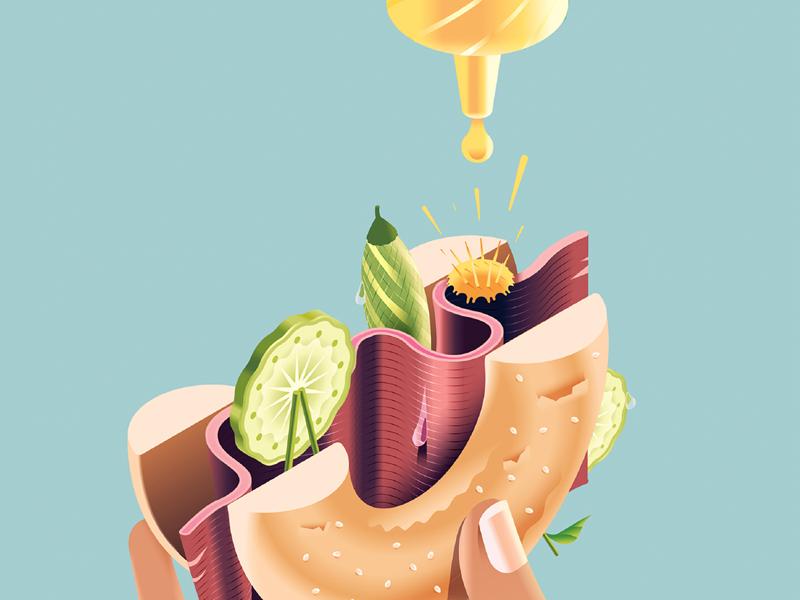 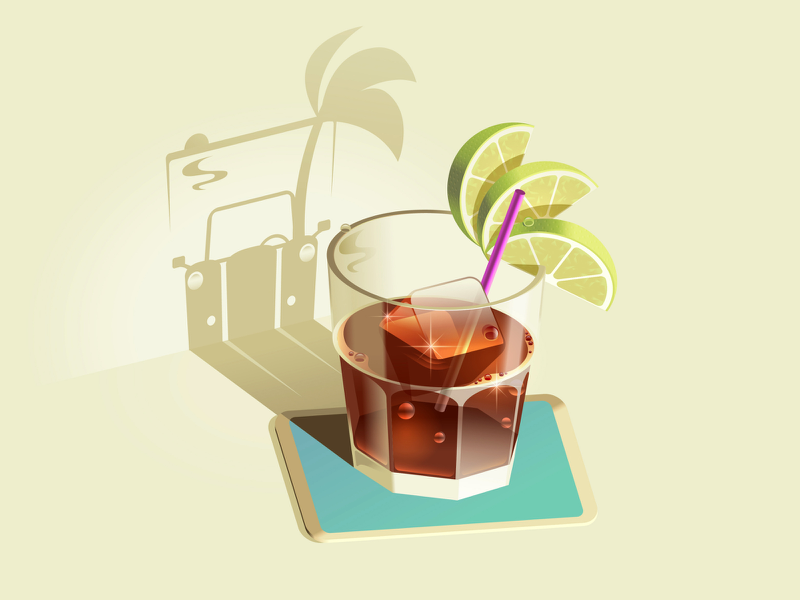 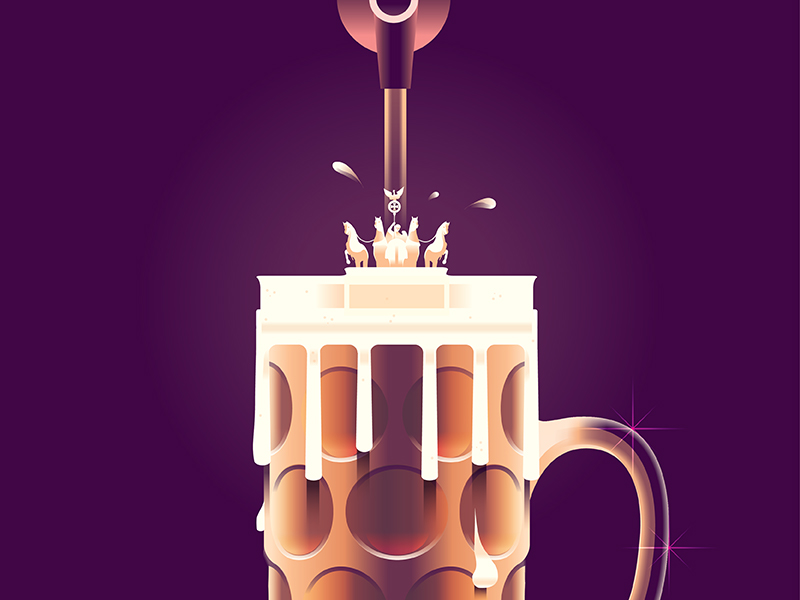 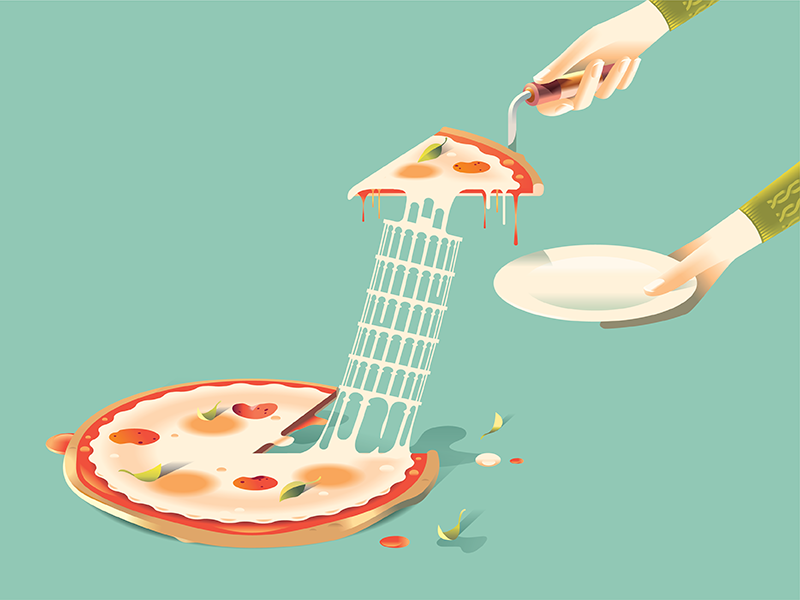 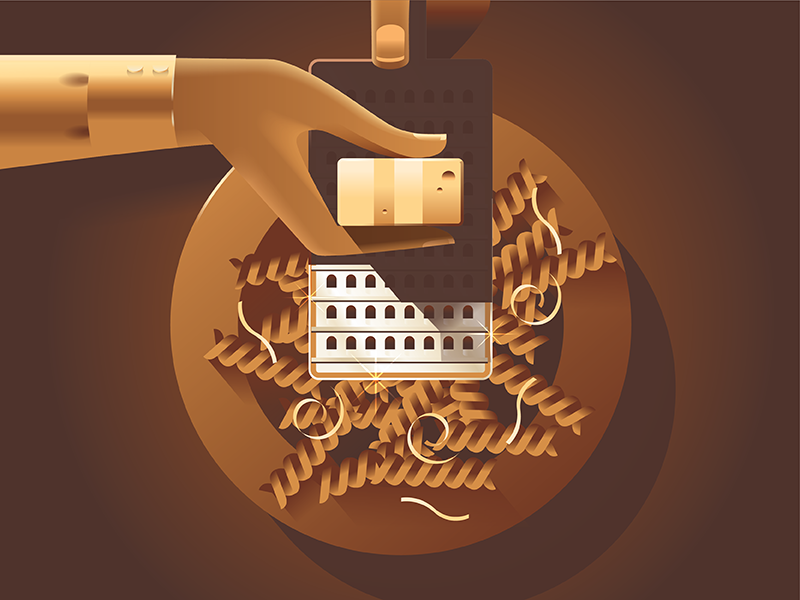 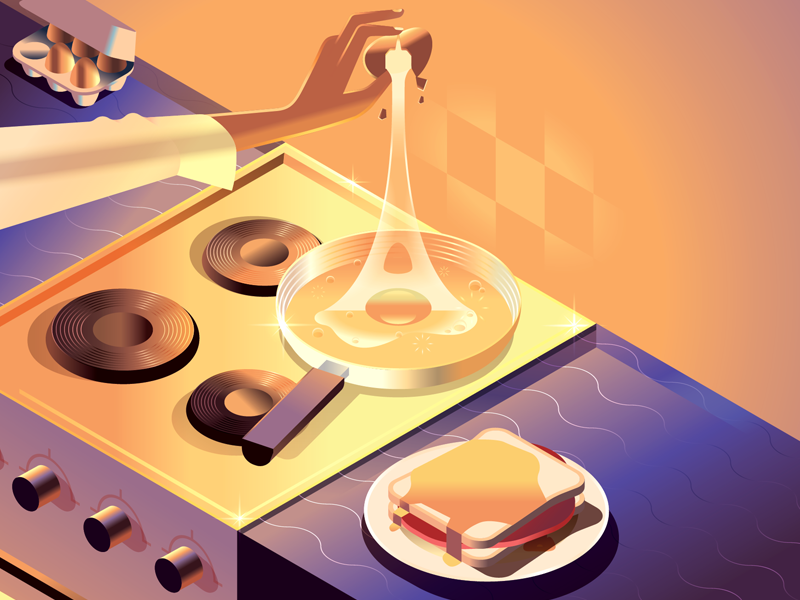 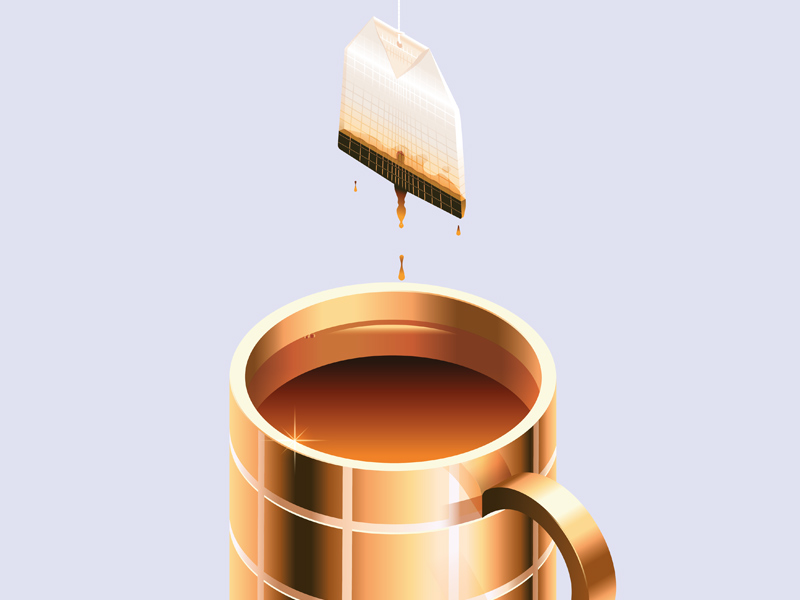 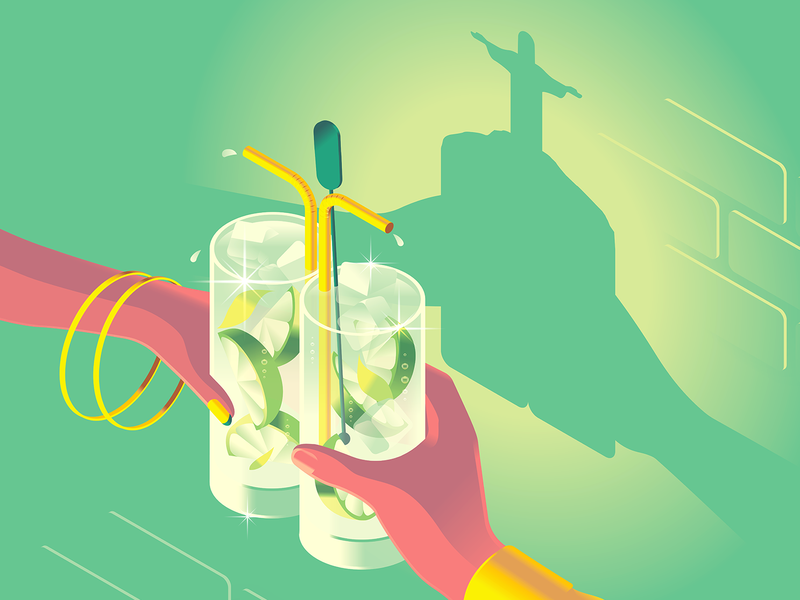 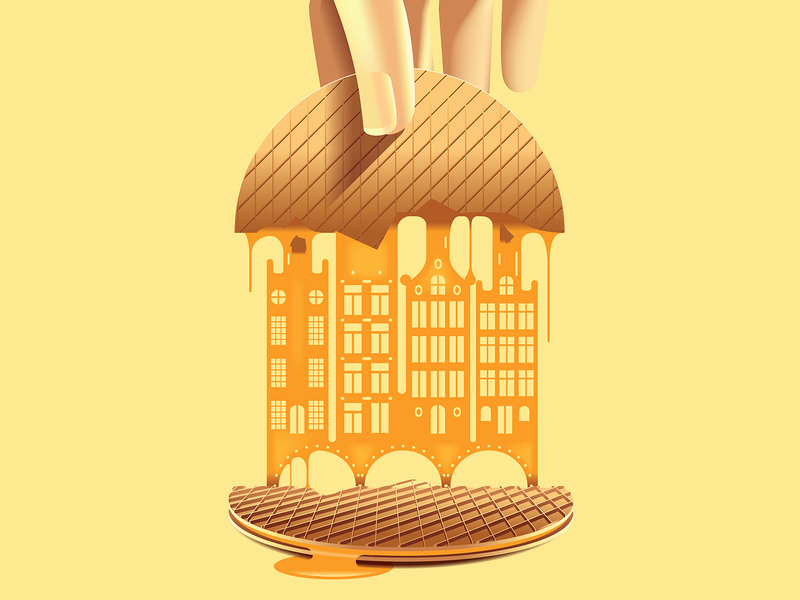 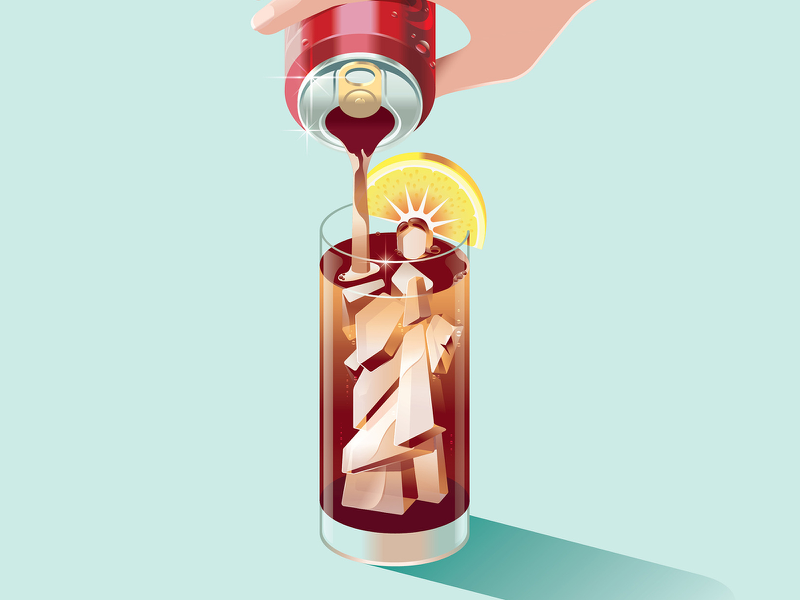 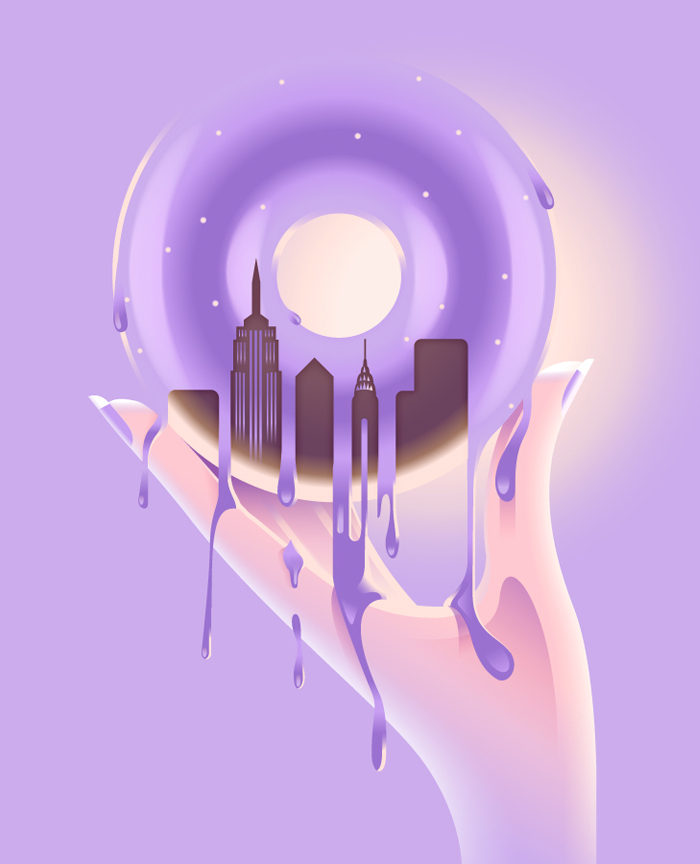 The Love Actually script is brimming with holiday cheer and writing lessons.

I was late to the party when it came to seeing Richard Curtis’s masterpiece, Love Actually. One of my professors in college put it on as an example of a movie that took an interesting look at a multi-POV narrative. I have to admit that I didn’t have high hopes when she put it on, but I quickly found myself emotionally identifying with the characters on many different levels.


To this day, I look forward to watching this movie every year and frequently am surprised by the new connections, cameos, and layers I find with each viewing.


I think there’s a lot to learn from this beautiful look at love. So, cozy up to someone you care about and let’s see what we can unwrap this year.

Go Behind the Scenes of Some of 2020's Most Popular Movies 2020 didn’t have a ton of new movies, but it had some really memorable ones.

This was such a strange year—I feel like the times I wanted to feel normal I’d put a movie on, open my bag of popcorn, and just try to escape. One of my favorite yearly roundups is the one done by Insider where they show you the movie magic behind this year’s hits.


It has all the stunts, camera trickery, and stars your heart desires.


Check out this video from Insider and let’s talk after the jump.

This was the year of the COVID compliance officer, but it also brought its own set of breakthroughs in the world of special effects. I know I’m still reeling after that Mandalorian reveal last week.


But that was TV.

The Beauty of Kitschy Horror in ‘Edward Scissorhands’ On the 30th anniversary of Tim Burton’s Edward Scissorhands, let’s celebrate the amazing genre of this film.

There is no doubt that the world within Edward Scissorhands is a bit off-kilter and a little bizarre. Using a style referred to as Burtonesque, director Tim Burton creates a stylized, hyper-real world that feels just slightly out of line with reality. With its pastel-colored houses, brightly colored clothes, and the Avon lady knocking at lonely housewives’ doors, Burton captures the dullness that is “normalcy” through the underappreciated genre that is kitsch.


Kitsch is a style that appeals to what is popular rather than “high art.” It’s good-bad, like hamburger phones, clown art, or snowglobes. While some films strive to feel more realistic and serious, kitsch strives to have fun with the absurdity that is found in reality.


Think of David Lynch’s Blue Velvet, Pee-wee’s Big Adventure, or pretty much any film made by John Waters. The COVID-19 pandemic has changed everything—especially the way things are run on a film set.

2020 went downhill quickly after January. With the COVID-19 pandemic altering life as we know it, most industries suffered a harsh blow. Unfortunately, this meant that a lot of productions in Hollywood had to pause filming until further notice.


Adjusting to the new regulations posed by the CDC hasn’t been easy (or rid of error). After months of trying to figure out how the industry could continue business as usual, some productions have begun filming again under new restrictions. Through this new way of running a set, there’s been a new on-set position in Hollywood known as a “COVID Compliance Officer.”


This role has become crucial in the film world. Without it, productions would grind to a halt. Tom Cruise’s now-famous on-set COVID rant brought to light how high the stakes are on a film set during this time. The Golden Globes is known for its controversy, but this seems so stupid…

The Golden Globes are unlike any other awards show. Studios submit their movies and TV shows into the categories they think it might fit. These categories are split between drama, comedy, lead, and supporting. Then an initial committee reviews the submissions.


But according to the official rules, members can then vote to accept the studio’s submission or they can overturn the submission and switch the category. You need a 2/3 majority to overturn. The Hollywood Foreign Press Association currently includes 89 journalists from more than a dozen countries.


Okay, got all that?


This year, A24 submitted their film, Minari, into the competition. The movie is from writer/director Lee Isaac Chung and follows the story of a Korean-American family who pursues the American dream in the rural US in the 1980s.


It’s a staggeringly beautiful look at the American dream and immigrant life. Since the family is Korean immigrants, they speak mostly Korean in the film. But it takes place in America and is about what it means to become American.

A Movie and a Movement: Filmmaker Steven Bognar on the Importance of '9 to 5' 40 years ago, cult comedy 9 to 5 was released. We look back on the classic with the co-director of the documentary 9to5, Steven Bognar.

Perhaps things aren’t quite as bad now as they were in the 1980 comedy starring Jane Fonda, Lily Tomlin, and Dolly Parton.


In 9 to 5, the actors play three coworkers suffering under their “sexist, egotistical, lying, hypocritical bigot” boss (Dabney Coleman), who bullies and abuses them mercilessly until at last, they kidnap him. In his absence, they pass several new office policies that benefit everyone.


It’s one of my favorite movies. 9 to 5, even in its more zany moments, remains radical and relatable.


Anyone can understand Fonda’s character Judy, who breaks down in tears after being called names and left alone at the Xerox machine to clean up a mess of paperwork. Anyone can feel for Parton’s Doralee, who yearns to be friends with her coworkers but is ostracized because of rumors her boss spreads. And I wish I were like Tomlin’s Violet, who can roll calls and shoot off barbed retorts without breaking a sweat.

'The Mandalorian' Finally Gives Us an Interesting Stormtrooper I love the world of Star Wars. There’s so much fun and deep mythology that provides the opportunity to tell exciting and new stories. But across all Star Wars, there is one thing that continually drives me a little crazy.


Stormtroopers suck at their jobs.


They have bad aim, they never make the right decisions, they’re easily fooled, and outside of the emergence of Finn in Force Awakens, have they ever been used in any interesting way?


Well, this week’s Mandalorian episode finally gave us a glimpse of an interesting Stormtrooper… and then ripped them away from us.


Let’s dig into these characters to see what’s going on.


Spoilers for The Mandalorian below.


Why Are Stormtroopers Always Kind of Dumb?

If you watched the Season Two finale of The Mandalorian this week, you were probably shocked by the same thing as me. Yes, that competent Terminator robot that was a new Stormtrooper was awesome.

We challenged you to make a short where sound tells the story. And you delivered.

There’s no better way to bookend Sound Week than to announce the winners of the 60 Second Sound Week Film Challenge. We received some exceptional entries from all across the world, and it just goes to show how creative the No Film School community really can be. Sound is an essential part of any story, and the submitted shorts showed that exceptionally well. It was difficult to pick an overall winner, let alone a top four.


Without further ado, let’s take a look at what the NFS community created.

You Call It A Vacation by Michał Pruszkowski

The Curve by Matthew Hitchcock Design the album cover for Disney’s and Pixar’s latest film Soul, and take home $10,000 in cash.

Plus, nine other finalists will win prizes.


Adobe and Disney have teamed up for a design challenge to celebrate Soul, a new film about a band teacher whose passion for jazz music sends him on an incredible adventure to discover the answers to some of life’s most important questions.


To promote the Dec. 25 release, the “Art and Soul Challenge” is inviting fans to design an album cover that shines a spotlight on their true selves. An album cover is an outward artistic expression of what’s inside, both literally and figuratively, making it a perfect format to play with themes from the film.


Soul is all finding out what makes you, you—whether that’s a feeling, a passion, a calling, or a place, and this contest is an opportunity for creative people all around the world to express exactly what that is.


To create your design, Adobe has provided all the assets through the Creative Cloud library, or they can be downloaded here.