What’s New on Disney Plus: How Disney Taught Us to Talk Like a Pirate

Not every Disney movie features a lead actor cited as a role model by Oliver Reed and Keith Moon. That’s the case with the very first all live-action movie the studio produced: “Treasure Island,” in which hard-living actor Robert Newton played Robert Louis Stevenson’s legendary peg-legged pirate, Long John Silver. Newton would die of chronic alcoholism just six years later and in the interim he mostly chased the glory of his Long John Silver in other swashbuckling seafarers.

The 1940s had been rough for Walt Disney’s studio: “Pinocchio” and “Fantasia” were back-to-back bombs and the studio was kept afloat through World War II mostly through government contracts to produce training films and contribute animation to propaganda efforts such as Frank Capra and Anatole Litvak’s “Why We Fight” films. The studio tried to cut corners by packaging together a number of anthology films — “Saludos Amigos,” “Make Mine Music,” “Melody Time,” “Fun and Fancy Free,” “The Adventures of Ichabod and Mr. Toad” — all of which feature shorts and sequences as artistically satisfying as anything Disney would ever produce but didn’t exactly light the box office on fire. Not that it mattered because they cost so much less to produce than the likes of “Pinocchio,” “Fantasia,” and “Bambi.”

As 1950 approached, Walt wanted to make a big swing to diversify what audiences associated with the brand. He found it in Stevenson’s briny classic: this would be his first film not to feature any animation whatsoever, kicking off a tradition of live-action filmmaking for the studio that’s now marking its 70th anniversary. Out of “Treasure Island” would emerge the idea of the Disney child star. And it would redefine the cinematic notion of pirates.

Newton, a native of Dorset in England’s West Country, just like the pirates of “Treasure Island,” had made a name for himself in British films of the ’30s and ’40s, including “Fire Over England” (1937), which paired Vivien Leigh and Laurence Olivier. He was the romantic lead of Alfred Hitchcock’s final British film before leaving for Hollywood, “Jamaica Inn,” about pirates holed up along the storm-swept coast of Cornwall. And he had been cast as Cassius in Josef von Sternberg’s never-realized adaptation of “I, Claudius,” one of the most longed-for films that never actually ended up getting made. This was a coarse man’s man of an actor given to rum and ribaldry, and who, not long after the phenomenal success of “Treasure Island” in 1950 would be accused of kidnapping his own son.

Funny how life has a way of imitating art, because much of “Treasure Island” finds Newton kidnapping, or otherwise menacing, 12-year-old Bobby Driscoll. The film is a slow burn: a creaky old pirate named Bones (Finlay Currie) gives young tavern-keeper Jim Hawkins (Driscoll) a map to the treasure he buried on an island, so as to keep it for himself and away from his murderous crew. He tells the boy to beware a man with a peg-leg who might be in want of it. Indeed, young Master ‘awkins finds such a man in Long John Silver, the cook at another local tavern, who signs up for a voyage sponsored by Hawkins’ mentor Squire Trelawney to find the treasure. Silver ends up populating much of the crew with his own men — all of whom want a piece of the loot they thought Bones had denied them. It becomes a “will they, won’t they” battle of wits as you wonder when the pirates — for they obviously are pirates, regardless of the dim Trelawney’s blindness to it; this is the kind of movie where the lead kid character is smarter than any of the adults — will lead a mutiny and take over the ship. They eventually do, Silver taking Hawkins hostage and threatening to slit his throat unless the rest of the crew acquiesces.

Newton’s pirate is a dramatic departure from previous Hollywood depictions of buccaneers plundering the Spanish Main. In films like “Captain Blood” (1935) or “The Black Swan” (1942), you’d have dashing romantic leads flying the Jolly Roger, such as Errol Flynn and Tyrone Power. Unconcerned with sex appeal, Disney ultimately opted for a more realistic approach with Newton’s Silver: pudgy, obviously illiterate, at times incomprehensible, and clearly not a former pupil of any of the major studio’s fencing masters. Nor their elocution instructors.

Instead, the actor inaugurates the “arrgh, shiver me timbers, matey!” school of cinematic piracy. Which is really just his West Country accent, leaned into with a little more bite. In fact, most of the names we would associate in the annals of piracy did come from Cornwall, Devon, or Newton’s Dorset (Penzance in “The Pirates of Penzance” is a small Cornish town). Blame Newton for the inauguration of International Talk Like a Pirate Day. 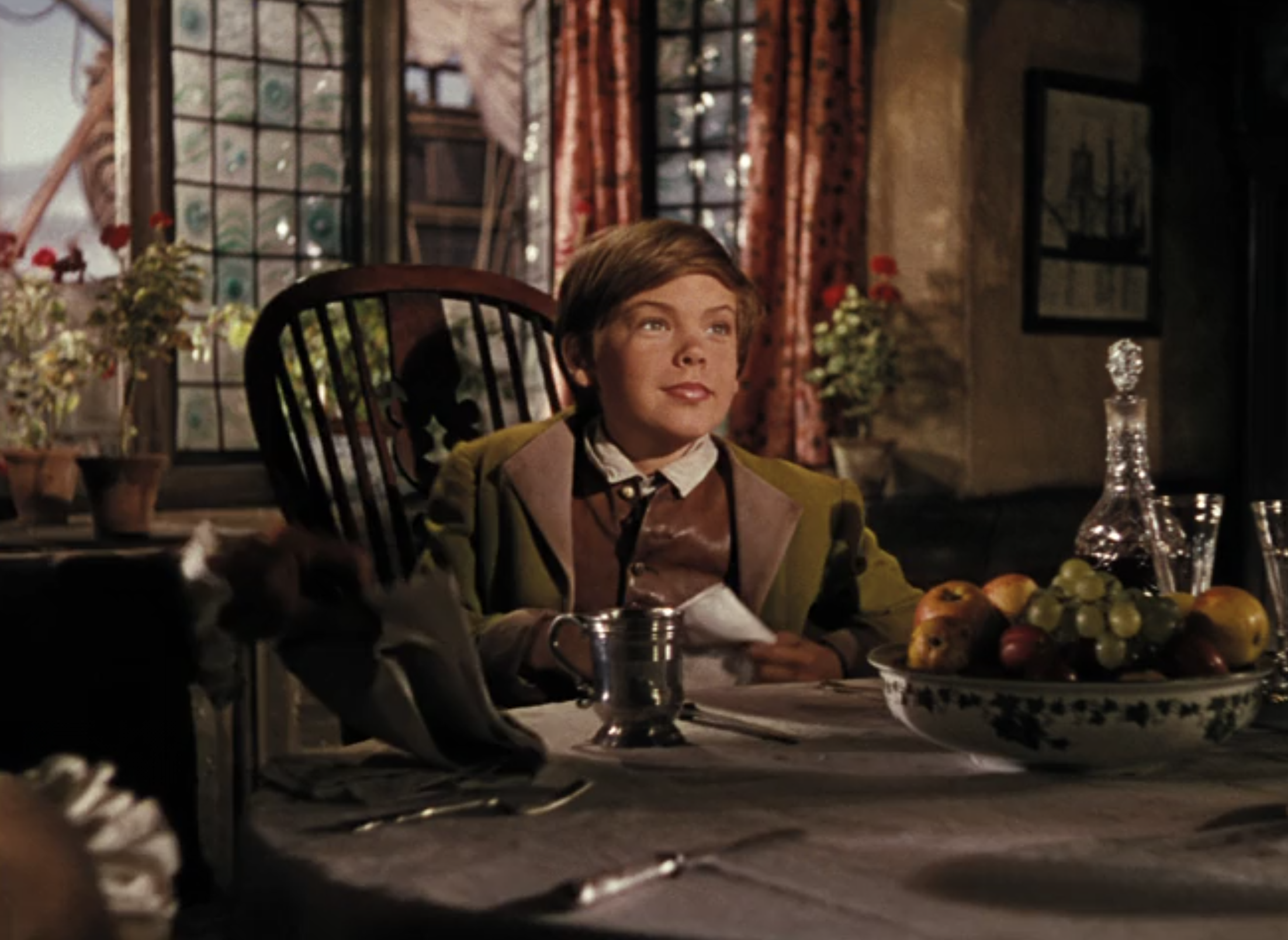 His approach may seem the definitive version of a movie pirate, but in 1950 Newton’s acting was as radical a redefinition of a pirate as Johnny Depp’s in the first “Pirates of the Caribbean” movie 53 years later. Pairing him with a young lad as bright-eyed and quick-witted — not to mention true-hearted — as Driscoll was the kind of cinematic alchemy from which, of course, a hit would be born.

Driscoll had appeared in several Disney productions before this, including the now impossible to see “Song of the South,” the comfort-blanket of a movie “So Dear to My Heart,” and a brief scene in “Melody Time.” All of those movies mixed live-action with animation, a style inaugurated in Disney’s most eye-popping effort of the ’40s, “The Three Caballeros.” It seems Walt just did not feel confident enough to have an all live-action film until he’d landed on a title with built-in name recognition with “Treasure Island.” That was the same mentality he brought to 1950’s massive animated success for the studio: “Cinderella,” Disney’s first full-length animated feature in seven and a half years.

“Treasure Island” is a gorgeous film to behold. Disney had been a pioneer in the use of three-strip Technicolor since his Academy Award-winning 1932 short, “Flowers and Trees.” In fact, the Disney studio from then on, with the exception of the wartime propaganda oddity “Victory Through Air Power” (1943), would release all of its productions using Technicolor’s process, by some accounts helping to keep the film colorization company in business as other studios found its methods too expensive. 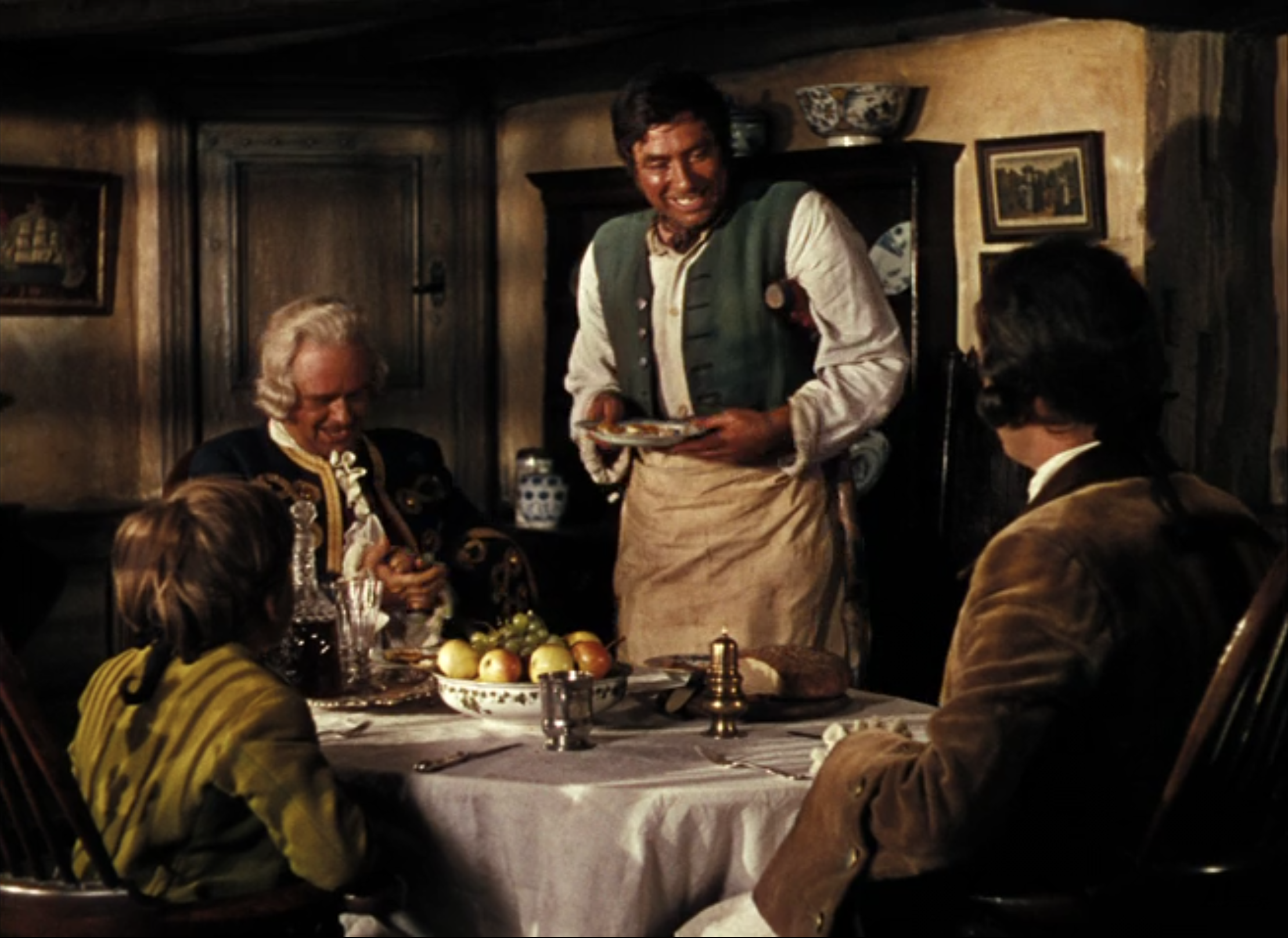 Disney had been Hollywood’s most consistent employer of Technicolor’s processes since the early 1930s. Notice how perfectly lit and composed this dining-room tableau is, the apples bathed in a golden light. Disney by way of Delft.

“Treasure Island” is soaked in atmosphere and attention to detail. Above all, it seems Walt Disney wanted you to feel immersed in his movies, as if you had jumped into the screen. And you’re not going to feel immersed in a movie if you don’t believe in it, so every piece of the production design here is carefully thought through. When the pirate Black Dog first approaches the Admiral Benbow Inn along a steep cliffside, that’s an actual cliffside in Devon being filmed. As he pushes the door to the tavern, director Byron Haskin’s camera is trained behind him, the pirate’s back to us; then he steps to the side, and it’s as if the camera has now adopted Black Dog’s point of view entirely as he walks deeper into the ale-soaked environs. His perspective is now ours. It quickly cuts to Jim Hawkins, but for a moment you felt like you were a pirate and you were in 1765. Other moments feel like that throughout the film, almost as if each set piece was in fact part of an elaborate Disneyland ride, the camera mounted to the front of the car. Universal Studios may have coined the phrase “Ride the Movies!” but it feels like Disney was doing that before he ever even stepped foot in the theme park business.

The other thing that gives “Treasure Island” a strong sense of immersion (rather than diversion, like so many later, more insubstantial live-action Disney efforts) is its surprising violence and amorality. At least two men are shot in the face while in close-up, one of which Jim shoots himself. Before he dies, that villain then launches a throwing knife into young Jim’s shoulder. The film was only 96 minutes, but when it was re-released in 1975, the studio had to cut nine minutes in order to obtain a desired G rating. The “uncut version” of “Treasure Island” had suddenly become as hard to see then as “Song of the South” is now. The censored footage was only restored in 1991, when having a PG-rating for the film then had become acceptable to the Michael Eisner administration. 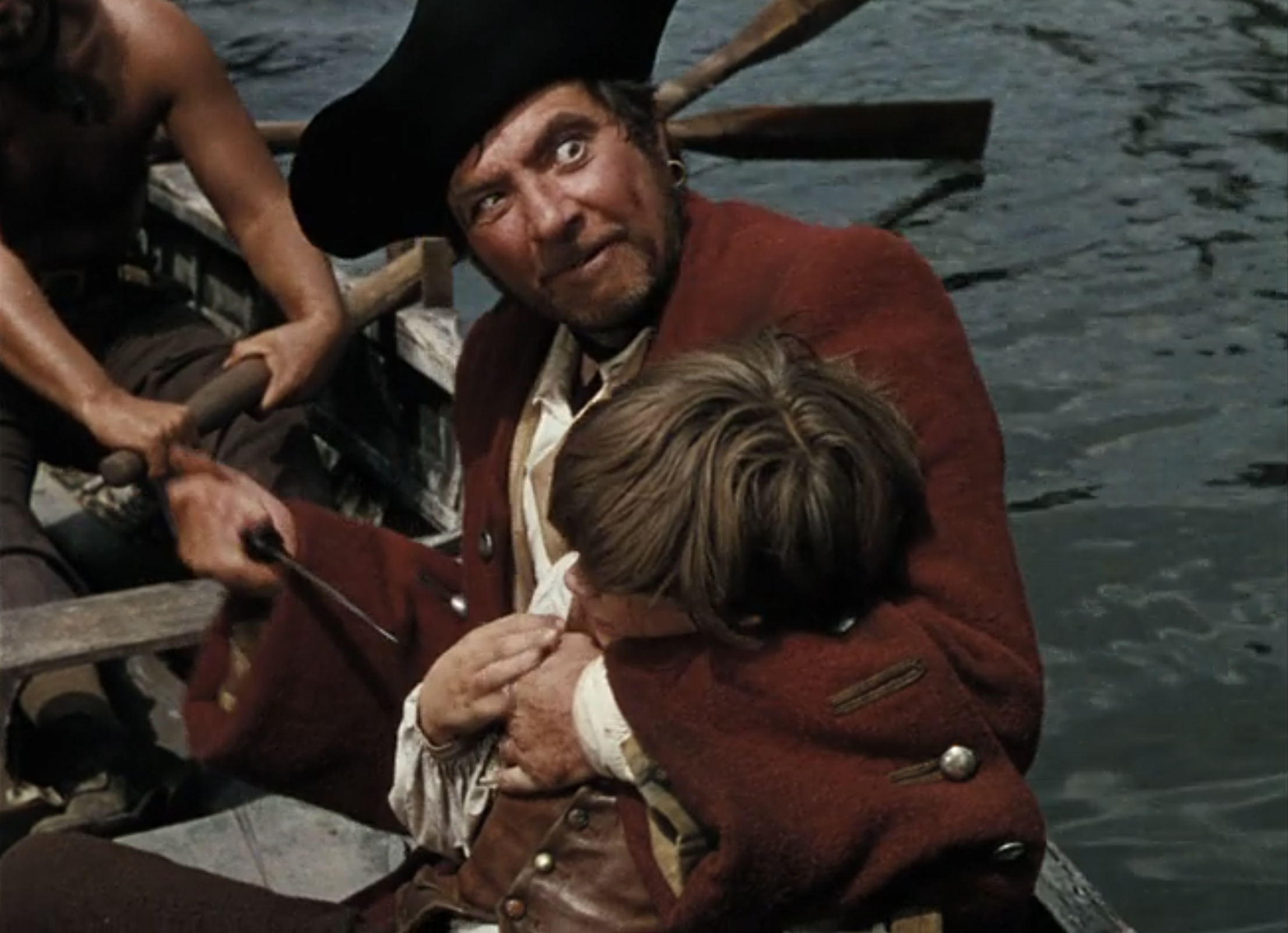 Not many characters could threaten to slit a child’s throat and have that child and the audience root for him in the end.

The biggest problem with “Treasure Island” appears to be an intentional one: none of the characters beyond Jim and Long John Silver are interesting at all. This makes you actually root for Silver by the end and heartily cheer when he makes off with the treasure — Jim even helps him get away with it by that point. The film unquestionably presents Silver’s victory as a happy ending. This is the morality of “Pulp Fiction.” Because Silver has more personality than everyone else — he’s a true character, even if he doesn’t have character — he deserves to win the day. How on earth did this get past the Production Code? Villainy not only wins, it’s endorsed.

And audiences ate it up. “Treasure Island” made back four times its production cost and solidified Disney as a producer of live-action films ever since. Its next few efforts would make little impact: who remembers “Robin Hood and His Merrie Men” or “The Sword and the Rose”? Disney’s next great live-action film would be “20,000 Leagues Under the Sea,” a film so superlative that it’s never demanded a remake and so adult in its themes — not a child actor in sight — that you’d barely think it was a Disney film at all.

But “Treasure Island” started it all. For his part, Driscoll’s only remaining contribution to Disney was to serve as the inspiration for the look of “Peter Pan” in the 1953 animated film. His path would be that of so many child stars, if a particularly sad one. After spending time in jail for drug abuse, he moved to New York to be part of Andy Warhol’s Factory. Those horrifying images earlier this year of countless coffins interred at New York City’s potter’s field, Hart’s Island? Driscoll’s body is there too. He’s in one of its countless pauper’s graves after dying in his East Village apartment on 10th Street from heart failure in 1968 due to substance use. He was 31.

Click to the next page for the archive of new releases to Disney+ from previous months.