Olivia de Havilland, Star of ‘Gone With the Wind,’ Dies at 104

The link to Old Hollywood gets smaller with the announcement today that Olivia de Havilland, two-time Oscar winner and the last living star of “Gone With the Wind,” passed away at 104. De Havilland, who just celebrated her birthday three weeks ago, died of natural causes, her reps confirmed.

De Havilland was a trailblazer, and became a beloved bridge between the entertainment of today and the world of yesteryear. The star of over 60 film and television roles, the British actress became immortal after playing the goodhearted Melanie Wilkes in 1939’s “Gone With the Wind” and became swashbuckler Errol Flynn’s primary leading lady, working with him seven times, most notably in “The Adventures of Robin Hood.”

Outside of her film work, she created a shakeup in Hollywood that ended up having long-standing repercussions. In 1943 she filed suit against her home studio of Warner Bros. for extending her contract for longer than the standard seven years. Other stars of the era had attempted to stop this forced extension, most prominently Bette Davis, but all had failed. De Havilland’s lawsuit, equating the extensions to indentured servitude, was the one that won. The “de Havilland law” meant no studio could extend a star’s contract beyond the length originally agreed.

Olivia Mary de Havilland was born in Tokyo on July 1st, 1916 to a patent attorney and stage actress. Olivia’s younger sister Joan was born 15 months later. Joan — who’d go on to equal fame as actress Joan Fontaine —and Olivia had a fraught relationship with many decades of estrangement before Fontaine’s passing in 2013. The family moved from Tokyo to England, but a series of illnesses plaguing the girls compelled their mother to move them to California where their father eventually abandoned the family.

De Havilland, nicknamed “Livvie” by her sister, took a liking to the arts, studying ballet and piano at an early age. When she entered high school she initially had plans to become an English teacher. In 1933 she made her stage debut in an amateur production of “Alice in Wonderland,” which sparked an interest in the theater. She started to dabble in numerous school productions; unfortunately, this caused tension with her new stepfather, who forbade her from performing, and de Havilland would spend her teenage years living with a family friend to pursue acting.

In 1934, after graduating, she was offered the role of Puck in a community theater version of “A Midsummer Night’s Dream.” It was here that director Max Reinhardt’s assistant saw the young de Havilland performing and offered her the understudy position of Hermia in a production of the same play Reinhardt was producing for the Hollywood Bowl. De Havilland moved to Los Angeles to tour with the production and when Reinhardt was offered a chance to direct a film adaptation of the Shakespeare play, de Havilland was promoted from understudy to star. Despite early misgivings, de Havilland signed a contract with Warner Bros. and made her film debut in 1935.

De Havilland became a quick study of film techniques, this in spite of her early, fluffy roles. In 1935 she and fellow bit player Errol Flynn were paired up in an adaptation of Rafael Sabatini’s “Captain Blood.” The film was a success, securing four Oscar nominations and propelling both Flynn and de Havilland into the limelight. The pair would be teamed up to even greater acclaim, and film immortality, two years later for “The Adventures of Robin Hood.” The film would get an Oscar nomination for Best Picture in 1938 and become one of the most popular examples of studio filmmaking. 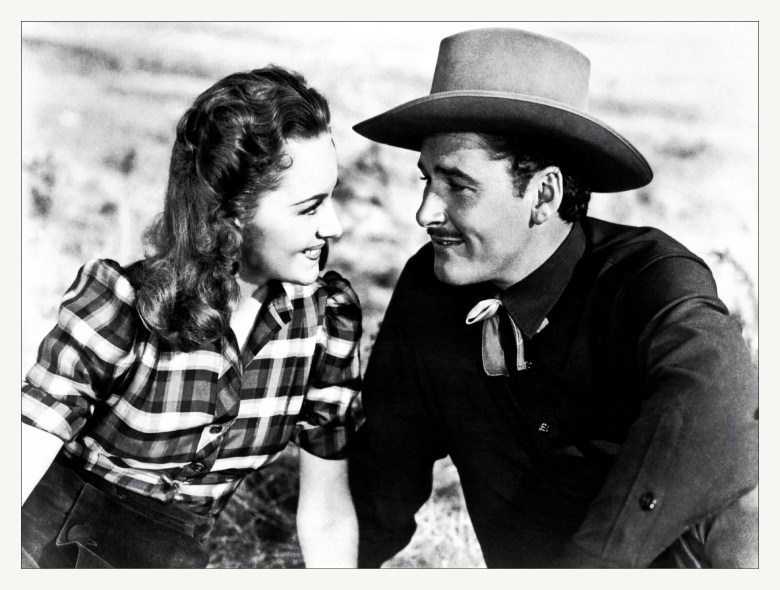 The next year would forever change how audiences’ saw de Havilland. Her role as Melanie Wilkes in “Gone With the Wind” secured her the first of five Oscar nominations for acting, and was the only time she’d be nominated for a supporting role. But in spite of the success of “Gone With the Wind,” de Havilland felt her roles weren’t challenging and by 1940 she was given the first of several suspensions by the studio for turning down work. She’d continue to turn down roles and be suspended while getting three Oscar nods in the 1940s, eventually winning her first in 1946 for “To Each His Own.”

Content to leave Warner Bros., the expiration of her contract continued to be extended due to her suspensions, necessitating the legal action that would pass the “de Havilland law.” Unfortunately, the lawsuit would result in her being blacklisted by the studio. She wouldn’t work anywhere for two years until 1945 when she signed with Paramount Pictures.

De Havilland would work steadily from there on out, continuing to rack up nominations for her work as a woman trapped in a mental institution in 1948’s “The Snake Pit.” In 1949 she’d win her second Oscar for playing the plain Jane seduced and disappointed by a beautiful man (played by Montgomery Clift) in “The Heiress.”

The birth of her son saw de Havilland turn to full-time motherhood, and while the actress continued to work on the stage, she took time off from filming. She’d do a lengthy run on Broadway in George Bernard Shaw’s “Candida,” before traveling to Paris and meeting Paris Match journalist Pierre Galante. The two would fall in love and marry in 1955 with de Havilland making France her home base. She’d continue to travel back and forth between Paris and the States, and in 1962 she published her first book “Every Frenchman Has One” about her time acclimating to the new country. 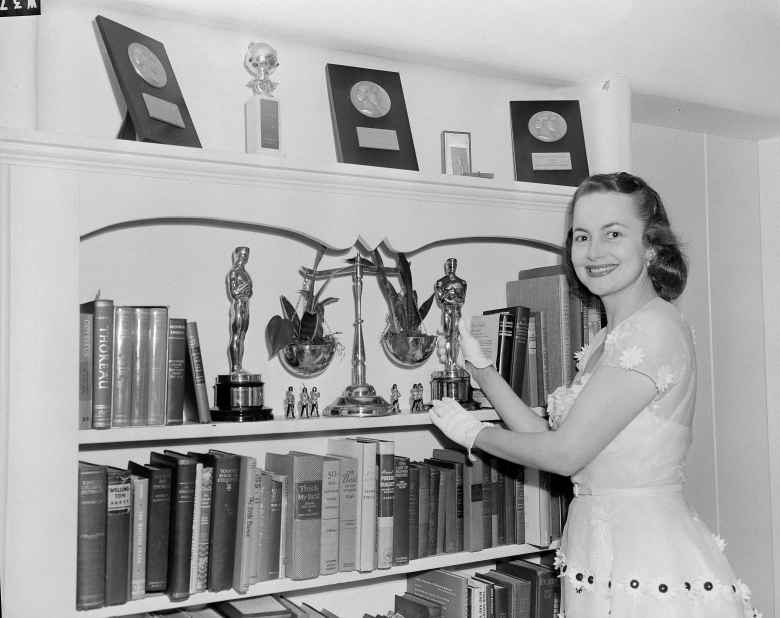 In the 1960s de Havilland would go the way of many classic film stars and turn to television and the horror genre. She’d star in the 1964 cult classic “Hush…Hush, Sweet Charlotte” opposite Bette Davis, a role that saw the elegant de Havilland revel in cursing and maliciousness. She’d follow that up the same year with “Lady in a Cage,” wherein de Havilland is trapped in an elevator as a gang of hoodlums terrorize her and her house.

De Havilland stayed active in the film world up until 2003 where she was a presenter at the 75th Academy Awards. She also made appearances as part of her 90th birthday at the Academy of Motion Picture Arts and Sciences. She received a National Medal of the Arts in 2008 and was knighted in France in 2010. But within the last decade de Havilland regularly refused to attend events, citing issues with her health and the struggles of travel.

De Havilland is survived by her daughter.