In 2004, Easter fell on the second weekend of April. It featured Mel Gibson’s “The Passion of the Christ” as the #1 film, ousting Guillermo del Toro’s “Hellboy.” That was no accident as part of a brilliantly executed release that achieved results far beyond anything Gibson anticipated.

Sixteen years isn’t that long ago, but the box-office weekend was full of titles and results that are impossible to imagine today. But first, here’s the context and some major achievements for Gibson’s film (all figures adjusted to 2020 ticket prices):

• The first is a record that will likely never be broken. This was the biggest grossing non-studio independent film ever, by far. At $559 million domestic, it ranks $180 million ahead of #2 “My Big Fat Greek Wedding.” (Though released by different distributors, both films were overseen by veteran Bob Berney.)

• It ranks #79 among all domestic grosses, and #5 among R-rated releases, #4 among Biblical stories (“The Ten Commandments,” “Ben Hur,” and “The Robe” higher, although the silent films “Ben Hur” and “King of Kings” might also have sold more tickets). The R rating for this incredibly violent film seemed to have been an exception based on the story for what otherwise could have been an automatic NC-17.

• By a massive margin, it is the biggest grossing non-English language film ever, by at least double over “La Dolce Vita” and “Crouching Tiger, Hidden Dragon.”

• Studios passed, repeatedly. First, because Gibson insisted on using ancient languages (and initially Gibson planned to release it without subtitles, assuming the well-known story didn’t need them); second, because while he previously starred in the films he directed, including “Braveheart,” but here he cast the lesser-known Jim Cavaziel. And finally, once the film was finished, accusations of anti-semitic elements in the retelling caused top distributors to demur.

• The arc of the release came with precision, debuting in 3,006 theaters on Ash Wednesday. Its run was nearly finished by Easter, its 47th day. It was #1 its first three weekends. The first, at $120 million, came after two days that brought in $60 million. At the time, it was the biggest February opener ever, with for the first five days only “Black Panther” bigger.

• The following weekend, it fell to #10, with the Easter boost fading. Its subsequent gross only amounted to 4.5 percent of its total, and shows how closely it followed the religious calendar.

• Badly reviewed (a 47 Metacritic score) and economically marketed (reported little more than $20 million adjusted), this received massive support from the American evangelical community. This inspired all studios to explore this market, and its grassroots marketing. 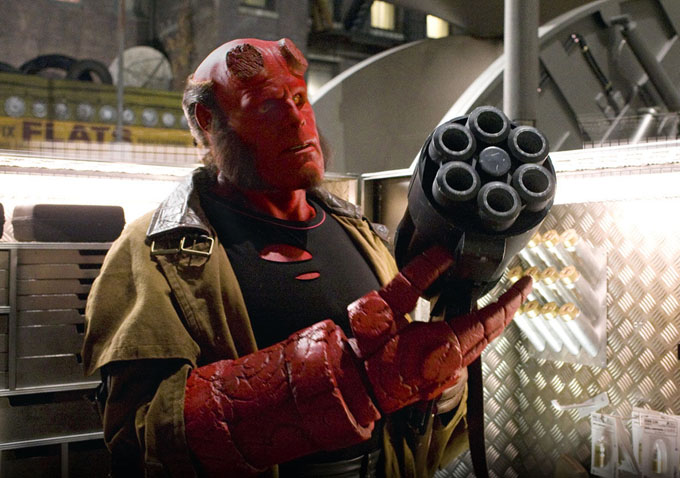 • “Hellboy” wasn’t del Toro’s first #1 (“Blade II” was in 2002), and “Mimic” preceded that as an English-language release. But it was his first success with a film clearly defined by his vision and the Spanish-language “Pan’s Labyrinth” followed.

• On this 2004 weekend, five new wide releases opened. Today, as many as three is a rarity. But the results for these suggest why the production world has changed so much.

• “The Alamo” is mostly forgotten, but it remains one of Disney’s biggest flops ever. The retelling of the siege on the Texas fort cost a staggering $150 million. Originally planned as the reunion of Ron Howard and Russell Crowe after “A Beautiful Mind,” it ended up with a different team. The worldwide gross came to only a quarter of its pre-production marketing cost.

• “The Whole Ten Yards,” the sole sequel in the top 10, also was a flop, as were “Ella Enchanted” and “The Girl Next Door,” both original comedies. If you are looking for the roots of why so few comedies get released these days, this era helps explain.

• “Johnson Family Vacation” was the best opener, while playing at the fewest theaters. It starred Cedric the Entertainer, and despite getting terrible reviews and a not-good audience response (C- Cinemascore); even so, it did well initially. Although Martin Luther King Day now seems to be the go-to spot on the calendar for African-American aimed wide releases, Easter was the traditional target with the Sunday often being the single biggest moviegoing day for black audiences.

• In 2004, the box-office totals for the weekend were ordinary; it was the year’s 15th weekend and it represented the tenth biggest to date. Adjusted, it was bigger than any in our truncated 2020 calendar.

• Eight films in the top 10 each grossed over $10 million adjusted. That never happens anymore. Since the start of 2019, the highest total is five films; three is more common. Franchise/sequel films were already established as box-office mainstays by 2004 (“Shrek II” and “Spider-Man II” were the top two films of the year), but 16 of the 20 best grossers were original efforts).