Let’s Move to Mars: Here’s How We’re Going to Survive in Space 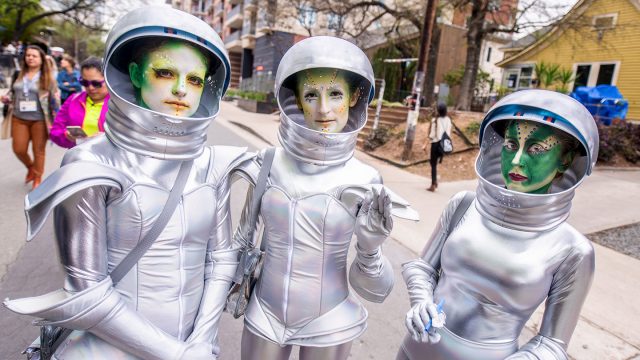 People have been talking about it for years, but we as a society are closer than we’ve ever been before – the time has come for us to pick up and move to Mars! In the Space Track we’re bringing in industry experts who will be sharing what we know so far about space, travel, and otherworldly related tech that could help us on our journey into the great beyond.

Before you start packing up your suitcases, take a look at sessions in this new track in the SXSW Conference on space-related entrepreneurship, cutting-edge technology, and more.

To prepare for the trip, stop in at Moon XR: Speculative Storytelling and Future Media where Gabriela Brenes (SeirenFilms) and Maria Laura Ruggiero (SeirenFilms) will analyze how the Moon landing in 1969 marked a pivotal milestone in the history of humanity and, consequently, in the history of media and broadcasting. In 2020, they are setting out to imagine and build possible futures where tech, media, diversity, and science play a significantly radical new role in storytelling. Immersed in a collaborative exercise of world building where future humans walk the moon again, Brenes and Ruggiero will go through the elements of dystopian and protopian constructions and how emerging media can shape the experience of a new social milestone.

On this intergalactic adventure, not everyone is invited. As disruptive business models and technologies supposedly “democratize” access to space, Space for All: The Future’s Frontier hopes to address the philosophical and ethical paradigms around futuristic space. Dr. Timiebi Aganaba-Jeanty (Arizona State University), Payton Barnwell (The Spaceship Company), Dr. Tanya Harrison (Planet Federal), and Luc Riesbeck (George Washington University) debate how and why humanity seeks to move beyond our cultural and technical horizons – literally and figuratively – in this new era of the space race.

In 2019, NASA concluded a competition that sought perspectives from outside the traditional aerospace industry to explore how a human habitat could be designed and delivered, on Mars using autonomous 3D printing technologies. The goal was to advance construction technology needed to create sustainable habitation solutions for Mars and beyond. This was an opportunity for designers and engineers to push the thinking on human-centric design with an approach that moves beyond the idea of astronauts as purely operators, to create habitats where people can not only survive, but also thrive.

So what is required to create an environment where people can live and explore the far reaches of space? Learn how to build a habitat for ourselves in Living on Mars, Beyond Surviving with Xavier De Kestelier (HASSELL), Beth Healey (Hôpital Du Valais), A. Scott Howe (NASA), and Rob Mueller (NASA).

On the way to Mars we’ll need to swing by the Moon and pick up reading material for the trip: The Billion Year Archive and Lost Lunar Library! The first installment of the Lunar Library, an over 30 million page archive of human history, science, and culture crash landed on the Moon in April 2019. The Lunar Library is part of the Arch Mission Foundation’s Solar System-wide Billion Year Archive intended to create a back-up of planet Earth. Arch Mission Foundation’s Co-Founder Nova Spivack dives into Arch’s ambitious mission, the breakthrough storage technologies developed to create the “Arks,” and the fate of the Lunar Library as well as future planned missions reaching across our Solar System, and how AMF is helping to develop an interplanetary internet.

To keep us safe from storms erupting from the sun while we’re establishing our new life, we have Preventing Space Weather Disasters. As society grows more dependent on tech, the effects from such “space weather” events will become more impactful. Better protection against solar tantrums requires a better understanding of the sun.

With the extreme close up of the sun’s surface that the National Science Foundation’s new Daniel K. Inouye Solar Telescope in Hawaii will take – Hazel Bain (National Oceanic and Atmospheric Administration), David Boboltz (National Science Foundation), Valentin Martinez Pillet (National Solar Observatory), and Claire Raftery (National Solar Observatory) will expand on how this image is set to revolutionize our understanding of the sun and what drives catastrophic space weather, guiding better future models for predicting solar storms and enhancing society’s ability to defend against them.

To get more information on exploring other planets, other worlds, and other dimensions – check out the Space Track. Launch yourself into more programming that will celebrate the possibilities of the next wave of inter-galactic travel, as well as explore how space-related technologies can propel tomorrow’s innovation here on earth.

Across our 22 tracks of Conference programming, browse all sessions on the SXSW Schedule and add events to your Favorites list to start planning your SX adventure.

Join us for SXSW 2020 from March 13-22 in Austin, TX. Check out how to attend, plan your housing, and stay up to date on SXSW 2020 news by following us on Twitter, Facebook, LinkedIn, and Instagram.

The post Let’s Move to Mars: Here’s How We’re Going to Survive in Space appeared first on SXSW.