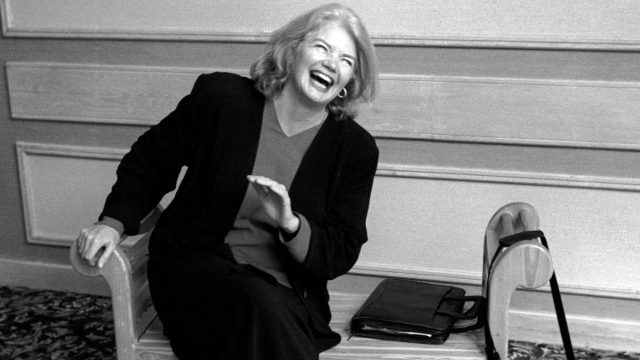 The 2019 SXSW Film Festival is almost upon us and we can’t wait to have you here! Before you make your way down to Austin, TX, get to know films from our lineup a little bit better with our Filmmaker In Focus series. Dive into our Q&A with director Janice Engel, as she tells us about her film Raise Hell: The Life & Times of Molly Ivins, which will screen in Festival Favorites.

Janice Engel: Being able to share Molly Ivins with her “beloveds” but even more important, introducing her to a hungry public who needs her humor, brilliance and prescience. Molly Ivins challenges all of us to take personal responsibility for political and social issues that impact our lives. The film is a lightening rod to get involved in grass roots projects, local and national politics, and voter registration. If we want change, it starts with us.

JA: Six-plus years ago, my soon-to-be producing partner James Egan told me to go see this one woman play Red Hot Patriot: The Kick-Ass Wit of Molly Ivins starring Kathleen Turner. So I did, the last week it was running in LA. I was knocked out by who Molly Ivins was, how she spoke and who she so brilliantly skewered. Both James and I could not believe there had never been anything done on Molly Ivins, so we jumped in full throttle and here we are 6 plus years later.

As I dug into Molly’s life — practically living in her archives at the Briscoe Center for American Studies at the University of Texas — her friends, family, and colleagues took me in and shared incredible stories and nuggets of this larger-than-life, warm-hearted, fantastically funny and brilliant woman who was an equal opportunity satirist and a serious political wonk who was absolutely prescient.

I also discovered on a much more personal level that both Molly and I shared a similar trajectory: a deep distrust of patriarchal authority and a need to stand up for the underdog. Her politics are my politics and as her pal Kaye Northcott so aptly says, “Molly hated anyone who would basically kick a cripple.” Me too! Her rallying cry to “Raise Hell, that… this is our deal, this is our country… that those people up in your state capitols, up in Washington, they’re just the people we’ve hired to drive the bus for awhile,” resonates deeply. She said, “If you don’t vote, you can’t bitch, that’s in article 27…” Ya think! That alone cemented our kinship and my overwhelming passion to share her story.

JA: How important it is to VOTE! To learn and take their civic responsibility with pride and action. It is up to us to do “the heavy lifting”, as her good friend Jim Hightower says. And, how important Molly Ivins was, and is to our democracy, our sense of finding a way to agree to disagree and get back to unpolarizing our country. Democracy demands this and depends upon this. Molly knew that!

JA: I was literally about to walk into the Production Hub class that I teach at the Academy of Art University in San Francisco. Talk about being blown away and not being able to share it right at that moment. However, I did forward an email to my prod partners and editor where I wrote “Holy Shit!” Apparently, I did not forward it but hit “reply all.” The SXSW Director of Film, Janet Pierson’s response, “hahaha – now that’s the kind of response I love!”

JA: Where else should Raise Hell: The Life & Times of Molly Ivins be shown but her stomping grounds at SXSW in Austin, Texas!!

Add Raise Hell: The Life & Times of Molly Ivins to your SXSW Schedule. Stay tuned in the coming weeks as we share more interviews with our SXSW 2019 filmmakers!

The post Janice Engel Wants You To Raise Hell With Her Documentary About Molly Ivins – SXSW Filmmaker In Focus appeared first on SXSW.