It’s been 15 years since director Alfonso Cuarón last made a film in Mexico, which is roughly the same amount of time I haven’t been able to visit the country. In the early 2000s, as he went on to conquer the big leagues of Hollywood following the success of “Y Tu Mamá También,” I was an undocumented teen who’d just moved from Mexico City to Los Angeles out of necessity. Each of our journeys took its course creating physical distance from the capital city of our births, but the longing to return never subsided.

In his case, being a gifted storyteller, that long-awaited, artistic homecoming took the form of a ravishing, monochromatic period film — one that exhumed memories from his early years not as ghosts but stark images. “Roma,” which earned him the top prize at this year’s Venice Film Festival and is Mexico’s Oscar entry for Best Foreign Language Film, is a drama named after the central Mexico City neighborhood where the acclaimed filmmaker grew up: Colonia Roma.

Invoking personal recollections from the 1970s, Cuarón channeled his appreciation for Libo, his former nanny, into a fictional character named Cleodegaria Gutiérrez — Cleo for short — a Oaxacan housekeeper remarkably embodied by first-time actress Yalitza Aparacio. Not only is Cleo the emotional core of this semi-autobiographical movie, but also our guide through a city in a state of flux.

For context, in 1970 — the year we first meet Cleo — Mexico hosted the World Cup for the first time, the Mexico City subway had only been operating for a few months, and my maternal grandfather died leaving behind eight children. At the time, nearly 50 years ago, my mother was a young woman who’d just started working to help support her siblings. She traversed the same streets as Cleo to get to her job in retail, and then back to the northern, working class, borough of Gustavo A. Madero.

On screen, I saw a version of my hometown as my mother would have seen it. Through Cleo’s eyes the places and energy described to me in anecdotes materialized. Time travel here is made possible thanks to the luminous artifice of exhaustively detailed replication by production designer Eugenio Caballero.

Two decades into Cleo’s future, in 1989, I was born to low-income parents whose education didn’t go pass the equivalent to middle school. Our diminutive apartment was located in Vasco de Quiroga, a poor “colonia” or neighborhood not far from the Basilica of Our Lady of Guadalupe. Four years earlier an earthquake had devastated Mexico City and McDonalds had opened its first location on Mexican territory. 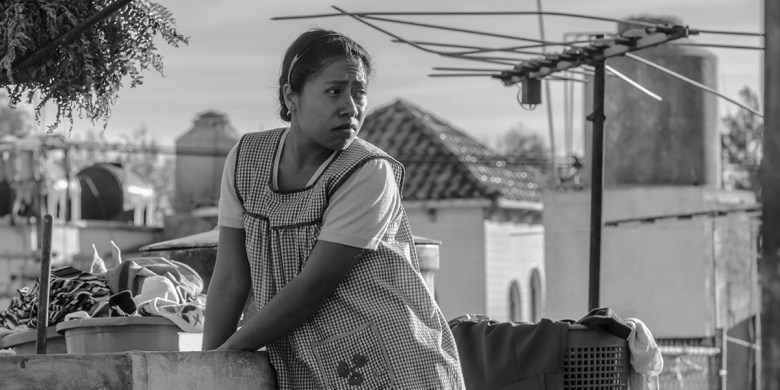 A nineties childhood in Mexico, in the aftermath of NAFTA, meant significant exposure to American content, products, and aspirations — despite those being mostly unattainable for the majority of Mexicans. Some of this influence is indelible in “Roma,” but as decades went by the power of globalization made it all the more inescapable, especially in the capital. Outside, large malls, foreign fast-food chains, and supermarkets gained ground on street markets, informal stands, and itinerant vendors; while inside us kids were watching American-made cartoons and series dubbed in Spanish.

In its current iteration, the city is no longer officially known as Distrito Federal (also referred to as D.F.), as it was up until 2016. Its rebranding, now as Ciudad de México or CDMX, is a transition that reflects a desire to be perceived as a global center parting with its past and aiming towards a more polished future. As the landscape morphs, so does its identity. Since I left, countless more international brands have become available there, new monuments have been erected, and a Day of the Dead parade has been implemented (inspired by Spectre).

For Cuarón, one can imagine, with more space between remembrance and reality, the transformation must be profoundly more noticeable. Key locations in “Roma” no longer exist: Cine las Americas, a movie theater seen late in the story, and Centro Médico Nacional, the hospital where a major plot point unfolds; while others, like Cine Metropolitan, Insurgentes Avenue, or the former slums of Netzahualcóyotl in the neighboring State of Mexico, have been repurposed, expanded, or improved. Some of these metamorphoses occurred while the director still worked in Mexico, but likely the impact was only truly felt when tracking back to how he first perceived his environment.

Mexico City today doesn’t look like it did in the 1970s or in the 1990s. The city of Cuarón’s childhood and that of mine don’t exist anymore in their exact forms, but their essence remains identifiable even under the new concrete structures, the most recent public transportation developments, the cultural wreckage caused by gentrification, and all other afflictions that a megalopolis of such magnitude must endure to survive and accommodate its exorbitant population. It’s a distinctly different town with a familiar face.

Earnestly, I must admit that my extended geographical separation and inability to physically reconnect with Mexico City (DACA recipients like myself run a massive risk traveling abroad) have turned my vision of the city into an idealized interpretation of what it truly is.

Abroad, the heart grows fonder and prouder for the idea of home. In my case, possibly more so than for those who’ve left but go back consistently. Selectively, my mind chooses to protect the snippets of joy associated with where I was born, because it’s only through those pillars in my origin story that I can understand who I am today. Some memories of a place you once knew stay intact while the physical space changes, caught up in the whirlwind of time. What’s magnetic about Cuarón’s “Roma” is that it captures the unfading essence of Mexico City in such timeless grandeur that it speaks loudly even to those of us who didn’t live there in the 1970s. There are a sensorial cues in the director’s portrayal of the city that defy chronology: sighs and sounds so engrained in the collective imagination of “capitalinos,” and many times of Mexicans in general, that they ring true across generations. 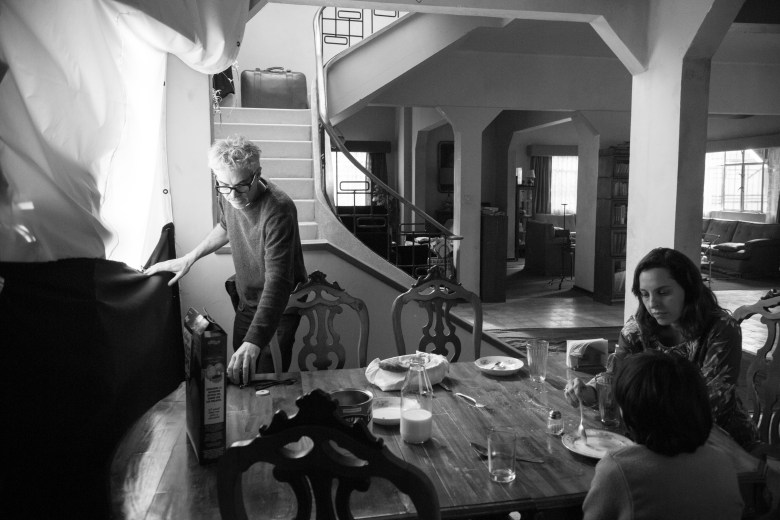 On the set of “Roma”

While some were implanted by our elders (like the TV show the family watches, “Ensalada de Locos,” which I never watched but my mother referenced), others come from first-hand interactions. A cacophony of life in motion invades your psyche for the film’s entire running time. That diagetic soundtrack includes dogs barking from every house in the family’s street, wandering merchants that offer services and products: from the knife sharpener (el afilador), the honey seller (miel de colmena), the sweet potato vendor (el camotero); classic romantic tunes on the radio (Juan Gabriel’s “No Tengo Dinero” or Leo Dan’s “Te He Prometido”), the marching band (banda de guerra), bedtime prayers (Ángel de la guarda), children’s songs (Que llueva, que llueva), and the unmistaken accent and slang of Chilangos (Mexico City residents) that is best appreciated via the toy vendors outside the cinema in a defining scene or in the phrases Fermín, Cleo’s boyfriend, utters.

All these sounds of the city that score the ’70s drama were still present in my time, and surely echo the experiences of plenty of my cotemporaries and others that came before or after. We are perpetually seeking the comfort of what’s reassuring. Watching “Roma,” a sense of familiarity overwhelmed me, like a welcoming embrace, as if to remind me that my ties to the city and its people are still, in spite of my departure, unbroken. Our long-distance relationship is constantly rekindled by virtue of a mental fire fueled with photos, conversations, songs, and movies placing me there. It’s all an exercise in memory that one day may not suffice, but for now it serves to cope with the irremediable disconnect and the fear of not losing touch entirely.

For Cleo, the protagonist who also left her home state, it’s a smell that carries her there, one she cannot find in the city. The morning after the segregated holiday party, where servants and employees don’t mix, Cleo walks into a field and breaths in to be briefly transported. “It sounds like this; it smells the same,” she exclaims, alluding to her village in Oaxaca, which we can infer she hasn’t seen in quite too many moons.

On that level, “Roma” stretches its arms to anyone who’s ever been away from the land that nurtured them in infancy or where their most precious moments unfolded. For some that separation simply meant moving cities for work, for others crossing deserts and oceans in order to escape crippling poverty, and for many more fleeing a country in shambles to survive a war. Removing ourselves from the locations where we loved and were loved inflicts a wound so deep that’s only bearable when holding on to the instants that make permanent the beauty of what we’ve lost.

A memory can be a replenishing source of hope, an anchor keeping us from drifting into darkness, a life jacket preventing us from drowning in the deep waters of despair. It’s a two-way street, as memories themselves need us to save them from fading away. For that purpose, Cuarón reached out into the ether collecting blurry images of a bygone era and made them sharply visible for himself and for us. The path back to Mexico City, for him, was in the making of a cinematic testament that will never be erased.

One day, soon enough, when the tides of history are on my side and that of millions of undocumented people healing their hearts with the everlasting impressions of their past, I too will go back to Mexico City. I’ll scrape off the rusty layer of pain that’s built up on my memories over the years and see them clearly once again. I’ll deliver pending hugs that were never given but always missed, visit the graves of those whom I’ve mourned in absentia, and see the city with my own black-and-white lens of nostalgia, probably not fully recognizing every part of it. I’ll get lost in its immensity and chaos, and subconsciously feel right at home. On the surface, perhaps everything has changed, but the things that really matter never will.

“Roma” is currently in limited release and streaming on Netflix.