‘A Christmas Prince: The Royal Wedding’: Holiday Rom-Coms Are Harder Than They Look

It’s an established M.O. for Netflix: Identify genres and formats that “belong” to other networks, and begin slow and steady encroachment. “The Final Table” is a clear answer to Bravo’s “Top Chef,” while docu-series “Dogs” would have gone to Animal Planet in a different life.

And now that it’s the holiday season, those treacly Hallmark Channel Christmas rom-coms are clearly in its sights. Four Christmas-themed, Netflix Original love stories will be released between Halloween and New Year’s, and the crown jewel may be “A Christmas Prince: The Royal Wedding” — a sequel borne of the breakout popularity of last year’s “A Christmas Prince.” While it’s possible that this informal infringement may have Hallmark execs shaken like a snow globe, they also may be content knowing that the Christmas Movie Industrial Complex is harder than it looks.

As the cultural critics at “Saturday Night Live” reminded us last year, there are some very specific guidelines. You need a career-gal heroine, albeit one who’s either looking to get away from the pressures of Big-City Life, or, one who’s looking to escape but Just Doesn’t Know It Yet. Either way, she’s enabled by a Prince Charming or similar who, after a few narrative roadblocks, sweeps her off her feet and into his fairy-tale life.

It took decades for Hallmark to perfect this format, but the almighty Netflix Algorithm nailed it. “The Christmas Prince” delivered handily with its story of Amber (Rose McIver), a journalist sent to the fictional European country of Aldovia for an undercover assignment on the royal family. By the end of the heartwarming tale, Prince Richard (Ben Lamb) proposes and she happily accepts. It couldn’t have been better engineered if a computer was involved (and, because it’s Netflix, it’s relatively safe to assume one was).

So now we have “A Christmas Prince: A Royal Wedding,” which also seems to tick all the boxes. However, in a surprising twist, it fails to follow through on the potential to build these films into a full franchise.

[Editor’s note: Spoilers follow for the end of “A Christmas Prince: The Royal Wedding.”]

In the sequel, Amber and Richard are still very much in love. In Meghan Markle-sque fashion, Amber’s love story is making magazine covers right and left, but she’s had to leave journalism behind. (The Aldovians even make her give up her blog!) Amber’s been doing her best to figure out how to fit into royal life, but it isn’t easy given her super-American impulses. And then… the algorithm got tired. Or maybe even 0s and 1s need a day off. Because that’s all the Netflix story has to offer.

Read More:Netflix’s ‘A Christmas Prince’ Is Just the Start of the Streaming Giant’s Quest for Christmas Dominance

Sure, a few other things happen in the 90 minutes. There’s a lot of wedding planning, for example, and Aldovia has some financial issues, which Amber resolves by putting her dormant reporting skills to work. And, it may not surprise more than a few of you that “Royal Wedding” does end with the couple getting happily married after all.

However, none of this suggests a franchise beyond King Richard’s half-hearted promise that “there’s always next year” when it comes to an exciting new Christmas adventure. 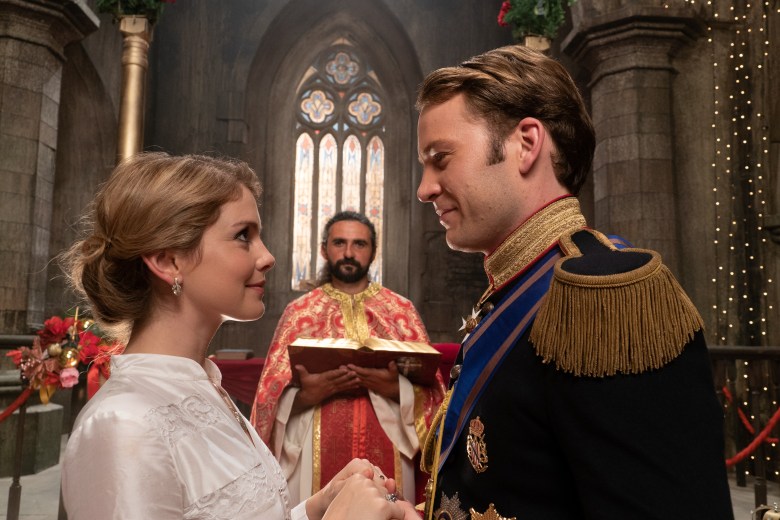 “A Christmas Prince: The Royal Wedding”

Given the breakneck rate of Netflix content production, it’s possible that its process just doesn’t have the time to build story worlds. Certainly, there are ways to expand beyond a single love story: This summer, “Crazy Rich Asians” made a clear effort to set up a sequel that would launch a whole new pairing for the next installment of the romantic-comedy franchise.

To be fair, it’s tough for serialized narratives to craft believable, gripping love stories. (Shows like FXX’s “You’re the Worst” are the rare exception, and require careful calibration.) As Judd Apatow said, “It’s like ‘Knocked Up.’ At the end, they drive off, but people will say that’s a happy ending, and I’ll say, ‘I don’t know what happened the next morning. She could have booted him out before they woke up.’”

Meanwhile, as trailblazer Hallmark proved, more optimistic Christmas movie franchises are certainly possible. In 2017, it released “Christmas in Evergreen,” in which Ashley Williams portrays Allie, a small-town veterinarian who wants her longtime boyfriend Ryan (Teddy Sears) to propose. Taking matters into her own hands, she wishes upon a snow globe that this will be her most romantic Christmas ever. (Spoiler: It worked.)

This year, Hallmark has “Christmas in Evergreen: Letters to Santa” — but this time the focus is on a brand-new couple: Lisa’s a retail designer who comes back to her hometown, and Kevin is the contractor who’s initially gruff but later sweeps her off her feet. The tooth-achingly sweet small town of Evergreen serves as the constant, and could certainly provide the backdrop to host any number of unlikely fairy tales.

Other holiday movies now streaming on Netflix include “The Princess Switch” and “The Holiday Calendar,” both of which would fit in nicely with their basic-cable counterparts. But neither is necessarily set up to become true franchises, which speaks to the difficulty of making the rom-com work as an extended narrative.

This is disappointing. not because it will affect the quality of these films — a key aspect of the classic Christmas rom-com is that it’s… well, good enough. But Netflix, with its epic capacity for disruption, could create the Marvel Cinematic Universe of heartwarming tales of love, family, and the holidays. The potential to move beyond mimicry to innovation is something that may not feel essential for content like this. But the holidays, so often, can inspire hope in us doing better.