For a 21-year-old, Chloe Grace Moretz has already racked up quite an impressive amount of work — and an ambition to do more. Since making her big screen debut in 2005’s “Amityville Horror” reboot, starring a rather ripped Ryan Reynolds, Moretz has, by her own account, appeared in over 60 movies. But as she told the crowd at Saturday’s Vulture Fest panel, her passion for acting began to “dwindle” prompting her to take a break from the business.

“I took about a year and a half break in the industry to kind of sit back and to reconfigure who I was and what I wanted and where I wanted to go in this next iteration of my career as an adult,” she told the crowd.

That, though, was when at the age of 19 she discovered “The Miseducation of Cameron Post,” the Desiree Akhaven film exploring America’s ongoing practice of gay conversion therapy, which won the Grand Jury Prize at this year’s Sundance Film Festival.

Moving forward, Moretz is forging a new path based on her passion for connecting with her audience: she’s about to get behind-the-camera. “My brother and I are actually co-directing for the first time next year,” she says. “We’re starting small, though, with a short film. We’re not trying to bite off more than we can chew.” “I’ve always been fascinated with what it’s like to be a director,” She continued, giving credit to Akhaven for teaching her that there’s more to helming a project than just barking orders. “You’re not just a director, you’re a conductor,” she said to the “Cameron Post” director, who was in attendance for the panel. “I’ve made over 60 films now and that was the first time in my career when I felt that energy on set and that amount of respect.”

“This one, in particular, was one for me that kind of hit everything on the head perfectly,” Moretz said, acknowledging her passion for LGBTQ rights, pointing to her two gay brothers and the inherent need she’s always felt to support them and the community. “This is a project that gave me the ability to partner my love of my art with my activism and be able to have a socially aware, socially progressive project but in an entertaining, funny, attainable way.”

Of course, tackling the issue of gay conversion therapy in an entertaining, and even funny light, can be a challenge. Shot in just 23 days for a budget around $800,000, Moretz was quick to call “Miseducation” a passion project. “Our director was someone who really created a community on set where we felt so supported and so safe and so comforted.”

Read More:Chloë Grace Moretz Doesn’t Want Louis C.K.’s ‘I Love You, Daddy’ Released: ‘It Should Just Kind Of Go Away’

Having that sense of community, especially when telling a story such as this, was extremely important, especially when you consider the simple fact that victims of conversion therapy are regularly stripped from their communities, their families, and their identities. 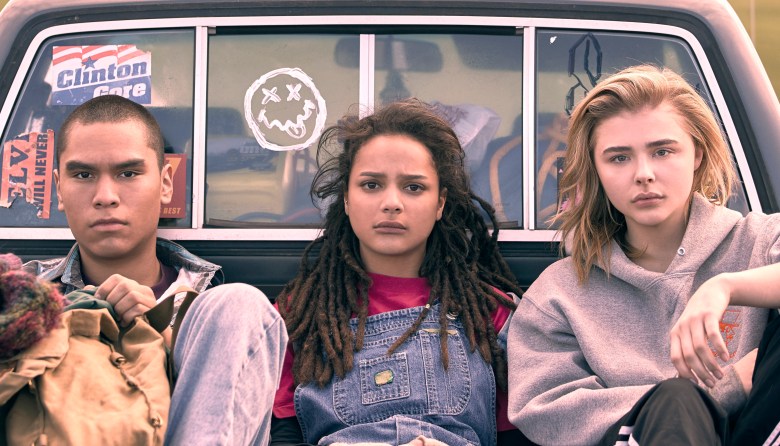 As disturbing as this subject matter sounds, however, Moretz took a moment to highlight the darkly comedic tone of the film, even going as far as comparing it to John Hughes classics like “The Breakfast Club.” “Instead of detention, it’s conversion therapy. Instead of a group of misfits, it’s a bunch of gay kids,” she said.

Moretz may have taken a tiny break from the industry, but her passion for activism and politics has only grown. Using her voice has proven fruitful for the young actress, who calls filmmaking “one of the most incredible mediums for change.” As for politics, the 2016 presidential election was the first time she ever voted and, using her visibility, she was brought onto Hillary Clinton’s campaign as a youth advisor, where she was able to visit colleges and speak to her peers on the former candidate’s behalf.

“They had a sense of community with me, in a way,” Moretz said. “And they were able to communicate with me, they had seen my interviews from when I was younger, and I thought that was a really beautiful thing, because, sometimes you feel like you’re just shouting out into the void, a little bit. It’s really stunning to hear there are people out there who do connect to what you are saying.”