‘First Man’ Struggles to Place Third; ‘Venom’ Still No. 1, but ‘A Star Is Born’ Stays Strong

Last weekend’s top two titles — “Venom” (Sony) and “A Star Is Born” (Warner Bros.) — remained ahead of the pack this weekend, but the margin between them was closer than a week ago when they both debuted. “Venom” was nearly double “Star” in its initial figures then, but only about 25 percent better now.

The strong (but not likely to be record setting) October continued with another weekend considerably better than the same one last year – around 35% higher. Grosses for the month have reached $400 million with a chance that when October is over this could be the strongest one since the record holder in 2004, which saw close to $1.1 billion (adjusted) total.

That’s the positive news, with the cumulative numbers in 2018 now 10 percent ahead of last year (about seven percent in ticket sales) and about to see an even bigger boost with what’s anticipated to be the strong opening of the new “Halloween” next week. That will be the third $40 million+ opener for the month, a record number even adjusting to current ticket prices.

But it doesn’t mean that this time of the year means automatic success, even with the elevated number of older viewers attracted to what is effectively the season for movies appealing to them. Case in point is the underwhelming initial reaction to Damien Chazelle’s “First Man,” the director’s first film since “La La Land,” with Ryan Gosling in the lead once again.

Its $16.5 million opening is not remotely a disaster. But with a production and domestic marketing cost that likely approaches $100 million (or more, with awards promotions ahead), this is far short of what seemed necessary to propel this into profit, or at least maintain its assumed position as an awards frontrunner.

This is an example of why studios often shy away from making investments in critically acclaimed titles with top talent unless they have additional hooks. A prototype for this kind of hoped-for success was “Captain Phillips” five years ago. Also a real-life story, it opened to (an adjusted) $28 million, then saw a four-time multiple and foreign results tracking about the same as domestic. All at about the same expense as “First Man.”

But “Captain Phillips” had Tom Hanks, in something of a comeback role for him, no less. And it had action and a visceral appeal in its tale of a high-seas hijacking. Then Hanks opened “Sully” two years ago to even stronger business – it had a captivating hook and, more importantly, curiosity about its story, even though its details were already well known.

“First Man” is more of a biopic, and one about someone who shunned the spotlight. Neil Armstrong exemplifies a generation of smart, successful, science-minded heroes who achieved greatness. But is that the kind of story that resonates today? Clearly not automatically with the kind of wide audience that includes anyone under 50, and not alive at the time of the moon landing in 1969.

That leaves an older, serious-minded audience. For a film with an initial audience profile that’s quite unusual for a wide-release – more than half of its viewers were over 35, two-thirds were white, and a majority male – that’s actually a decent result. The problem is it needed a wider draw along with greater appeal to older audiences. But if it does become a major nominee it will still reach far more people than most specialized releases.

Awards follow more cues than just box office, and “First Man” could still find traction and have a chance to locate its audience. Its B+ Cinemascore could be a sign of some resistance, though. That’s only a mildly favorable reaction from the audience – viewers lack passion for this one.

But that’s what “A Star Is Born” seems to have so far in abundance. Its 35 percent drop is actually better than either “Captain Phillips” or “Sully” despite opening better than either. The hold shows that the film has appeal beyond its initial event status or its curiosity draw and is gaining from positive word of mouth that could still propel it to a number approaching $200 million. And that would be an additional arrow in its awards quiver.

Meanwhile, the latest venture based on a Marvel property is propelling to an eventual domestic total well above $200 million. It dropped 55 percent, in a normal range for midlevel (i.e. not opening to over $125 million) Marvel titles, to reach $146 million already. Add to that another $235 million for its foreign take thus far, and a lower than usual cost for the studio (a little over $100 million estimated) and Sony will easily have its biggest hit (above “Jumanji: Welcome to the Jungle”) since its last Marvel release, “Spider-Man: Homecoming.”

“Venom” is gaining because of interest in Tom Hardy’s portrayal of an unusually nasty comic book character and a tougher (though still PG-13) iteration of the Marvel universe. It has a more visceral feel than some of Marvel Studios’ own films of late (with their social themes and sometimes comic elements), and it seems to be working. And significantly, coming out in October (rare for comic book blockbusters) has been the biggest factor in its success – and in boosting the month’s numbers overall. 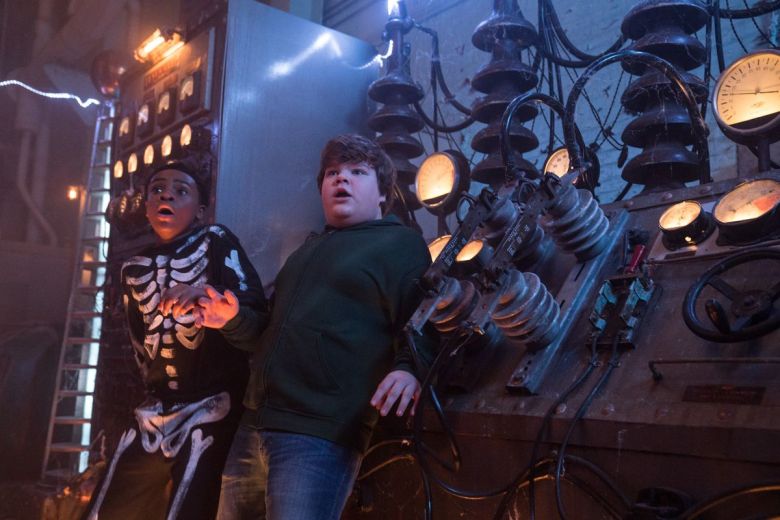 Another studio opener this weekend, also from Sony, is “Goosebumps 2: Haunted Halloween.” This live-action family comedy with Jack Black nearly beat out “First Man” for third place. The sequel did about two thirds of the 2015 original’s initial take. But its $35 million and likely equivalent foreign returns should make this the studio’s second profitable film released this month. 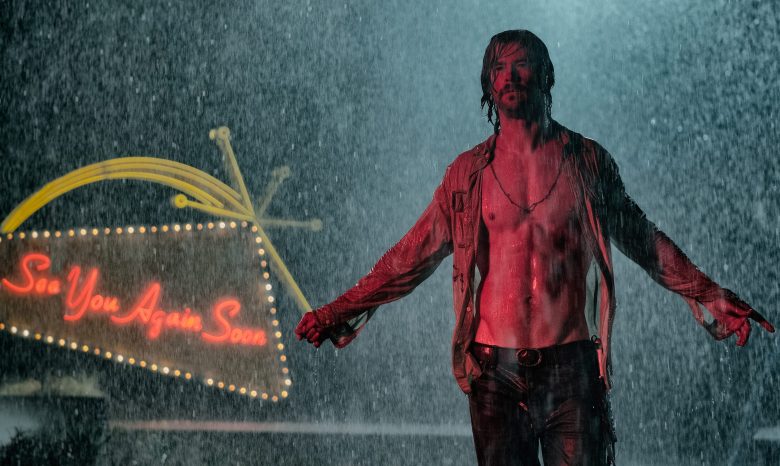 “Bad Times at the El Royale”

Also opening this weekend was “Bad Times at the El Royale,” a genre-bender aiming for cult interest though wide release. Directed by Drew Goddard, a writer for “The Martian” and someone with whom 20th Century Fox hopes to nurture a relationship, it needed more than its opening numbers to have much chance to flourish, particularly with “Halloween” to deal with right away. Its one saving grace is a modest budget of around $30 million.

The second weekend for “The Hate U Give” (20th Century Fox) played in only 248 theaters as it expanded, yet managed to land in ninth place with a healthy $7,000/theater average. This bodes well for its further expansion ahead, a case study in a studio handling a smaller, niche film with finesse.

The third weekends for “Smallfoot” (Warner Bros.) and “Night School” (Universal) both stabilized with drops of only around 35 percent.

8. The House With a Clock in Its Walls (Universal) Week 4; Last weekend No. 5