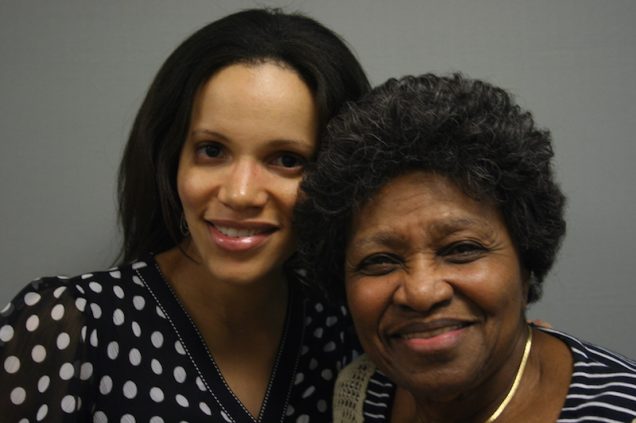 In May 2009, Cavril Payne Williams shared stories with her granddaughter, Nia Cavril Mathis, about traveling and entertaining members of the United States Armed Forces on the USO Tour, her musical family, and meeting her husband at the beach. Their interview was recorded in partnership with the Hebrew Home at Riverdale in Riverdale, New York.

“We were a family of music,” Cavril says, as she remembers the piano, dancing and singing lessons she had growing up. She tells Nia about how her brother, Cecil Payne, was discovered by Dizzy Gillespie, who told him, “’You don’t look right playing that little sax’ — he had an alto sax — and Dizzy said, ‘You should play the baritone; you’re big enough!’”

Cavril talks about traveling around the world with the USO tour, with her singing group, the Three Bon Bunnies. “I thought I was hot todoodie!,” she giggles.

Nia asks what it was like traveling in the 1940s as black women. “Some of them were surprised to see that we were a black group,” Cavril says. “Before we got there, they knew about us. And then when they saw our color!” She laughs, “It wasn’t easy. They looked at us and said, “‘I don’t want no’ — whatever they called us then, and the manager that we had said, ‘You get this or you get nothing!’”

After singing with The Three Bon Bunnies, her father told her, “’Don’t you think it’s time to settle down? You go to church, you meet a nice man!’” Instead of church, though, Cavril went to the beach, where she met a handsome lifeguard. She told him, “’My mother and father don’t want me to travel anymore; they feel that I should settle down and get married — hint hint hint hint!’” Cavril and Nia laugh as she recounts her wedding day. “My gown was ice blue, because I was naughty before I was walking down the aisle — I couldn’t go down with ice white!”

All StoryCorps Griot interviews are shared with the National Museum of African American History and Culture. To hear more unedited interviews from the StoryCorps Archive, please make an appointment at the American Folklife Center at the Library of Congress.