Storytelling is going through a transformation. We’re moving away from content that is 2D to content that is 3D, 360 and sometimes holographic. This is all happening because of the immersive technologies that are shifting our focus from storytelling, as we know it, to storyliving.

We will move away from being passive recipients of a story to becoming active members in them. Stories in the future will give us agency to “chose our own story” and personalize our entertainment even further.

Two technologies are leading the path in this transformation from telling to living. They are virtual reality (VR) and augmented reality (AR). VR is a digital environment in which you are fully immersed in a digital world. It essentially cuts you off from the real world. Through the use of virtual reality headsets, you are no longer looking at the real world, but instead at a digital environment. It is sometimes a world that you can interact with, where you have agency.

In other words AR changes the world around you, VR creates new worlds.

While AR and VR are currently viewed by many brands as a marketing tactic, these technologies have huge implications for the future of work and education. Credit Suisse estimates that the VR AR market might be worth close to $600 billion by 2025. To put this in perspective, that’s roughly approaching the size of the smartphone business. Every tech giant in Silicon Valley is working on developing these technologies.

This shift in content is, of course, being powered by artificial intelligence and is happening faster than consumers think. Educating marketers and communicators on these technologies is one of my missions. That’s why I’m currently working on the 1st book on VR/AR Marketing which will be published at the end of the month.

The way we tell stories visually is evolving. While we used to be told to sit as far away from our TVs as possible, we keep moving screens closer to our eyes from mobile phones to tablets to VR headsets. Some consider AR and VR to be last screens we will use as we move from mobile phones to smart glasses. To pretend that the way we tell stories won’t change is to be naive. Visual stories will become even more immersive and more engaging as we move forward with this augmentation of content.

If you want to learn more and be part of the conversation, please join me on October 2, 2017 at 10:30 a.m. EDT for the Visual Storytelling Today show. RSVP FREE: 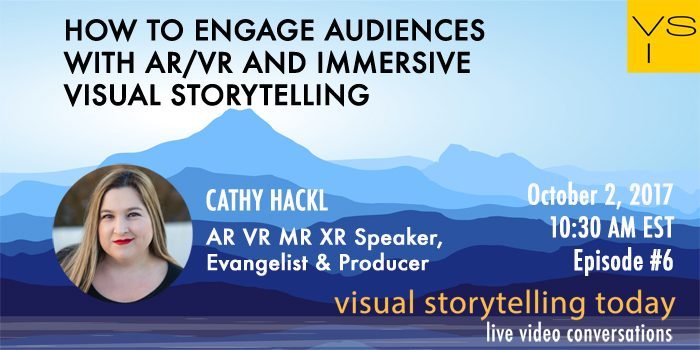 Already have questions you want me to address during the show? Sweet! Tweet your questions using: #myVSI

See you in the augmented world!