Who Is The Warren Buffett Of The Meme Economy?

This article originally appeared on Priceonomics..

Memes have received a lot of attention following the surprising outcomes of elections across the globe in 2016—and the fiercely fought campaigns leading up to them. Sharing images and making cultural allusions were both common activities long before getting into heated political arguments with family members over the internet was.

But making those allusions in white block lettering superimposed on familiar images—the humble image macro—has burst beyond a niche internet hobby and thrust memes of all sorts into popular consciousness.

It’s only human, then, that someone would start a market to speculate on different memes’ futures. The traders of the subreddit r/MemeEconomy speculate on which memes will become popular, and which are headed toward obscurity. They are, as the subreddit name would suggest, on their way to creating a “Meme Economy.”

Naturally, we want to know who the biggest winner is among the meme traders of r/MemeEconomy. If the Meme Economy flourishes into a financial market, who in this forum is its Warren Buffett?

We analyzed data from Priceonomics customer Me.me, a search engine that indexing memes and their popularity over time. From across the internet we gathered instances that each meme was posted. We looked at the positions that the traders took between February 28 and April 27 on Reddit, and then analyzed whether those memes were rising or falling in our index.

The analysis we present here is a starting point for calculating returns in the Meme Economy, but by no means the final word. Part of the reason is meme market goes through drastic, sudden swings. The market increased 389% from February 28 through April 26, then fell 85% from April 26 to April 27. Because of that, the results we present here are very sensitive to the time period we are analyzing.

That said, during this time we looked at, 25 traders posted gains, 7 traders had no gains or losses, and 25 lost on their calls. 21 traders outperformed the market’s moving average growth. The highest performing trader, reddit user itsyaboieon, had a 1433% return.

We began by looking at the activity level of the overall meme market. We looked at every meme mentions in r/MemeEconomy and looked whether the tag associated with that meme was rising or falling in the Me.me search index. We indexed total posts to start at 100 on February 28, and plotted the day to day increases and decreases in the market. 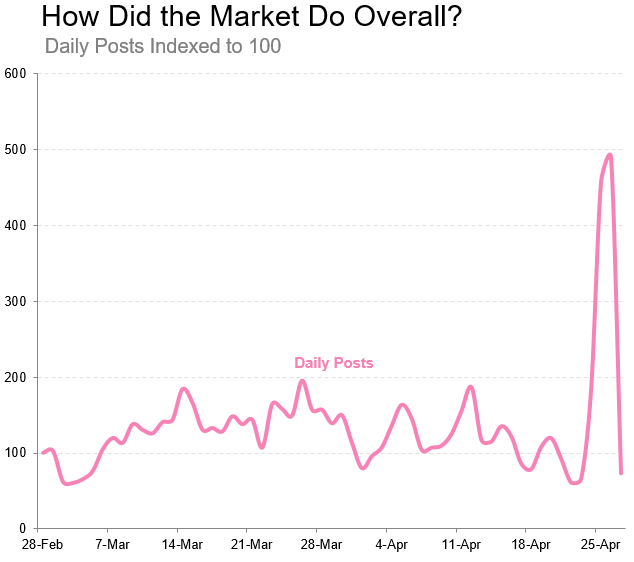 The popularity of the traded memes posted daily swings wildly.

Meme posting volume can fall by half, only to recover their losses and then some within a single week. The market posted a peak return of 389% on April 26. It closed April 27 at 72.7% of its starting value, a 85% drop from the high the day before. The market comprises many different memes.

To find out how well the traders performed in the market, we needed to look into changes in postings for individual memes.

We used the number of daily postings as the going-rate for a meme, and tracked the traders’ positions over the period. Any open positions are valued at their April 27 value. We then determined the gain on traders’ calls so we could calculate the percent return each trader generated.

The top trader timed the meme market, returning the original investment 14 times over. Meme trader itsyaboieon’s staggering 1433.3% increase is nearly twice the size of second-place investor GavinOriginals’ 800% gain. Like in other markets, the returns fall off sharply after the top few performers. Fifth-place trader Vipe777 is the lowest ranked who more than doubles the original investment. The next highest 15 earned between 21.4% and 95.2% returns—far better than interest on savings accounts, but a fraction of the top earnings.

We wanted to see what predictions provided itsyaboieon with such atmospheric returns. He placed a buy call on April 11 for texting, and held onto it through April 27. We graphed how the texting meme had performed compared to its posting frequency on February 28. 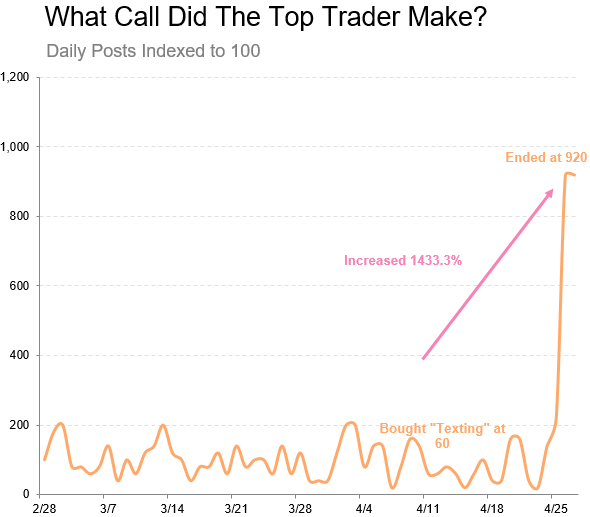 The meme had doubled on three separate occasions between February 28 and April 11, when itsyaboieon placed the call to buy. Each time it fell back down to below starting value. Little more than two weeks after itsyaboieon predicted the texting meme would grow, it shot up beyond 9 times its starting value. That sudden growth generated itsyaboieon’s chart-topping 1433% return.

The top 20 traders all saw their fortunes increase, but we wanted to know how they compared to the rest. We split the range of trader performances into six evenly-spaced groups, and counted up how many fell into each group. We used different colors to separate the top traders from the rest. 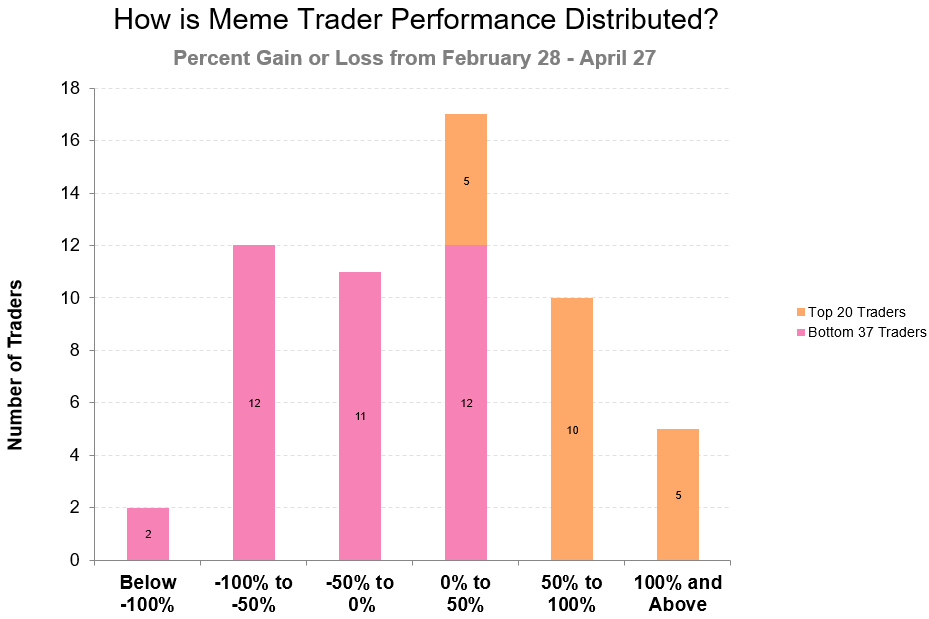 Trading results fit into a normal bell-shaped curve. Over half the traders fell into the middle two groupings, which range from decreasing by 50% to growing by 50%.  Only 7 of the 57 traders tracked had returns or losses larger than their original investments. Outside of the top 20, there were 12 additional traders who avoided losses on their positions. The market got the better of the 25 worst performing traders, who would have more had they buried their meme money.

High performing traders outperformed others several times over. Do high performing memes outpace the market as a whole? We wanted to know, so we identified the top 10% highest growth memes, and calculated the percent change in aggregate daily posts from February 28 for that group and for the entire market.  Then, we drew a line graph showing how those changes varied from day to day. 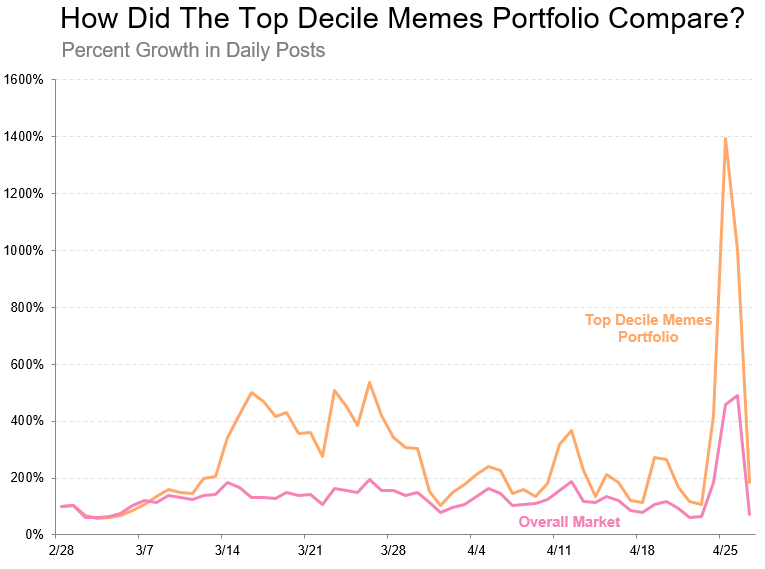 The overall market swung higher and lower from day to day, but on average ended around the same volume as it began. The Top Decile Memes Portfolio, on the other hand, experienced massive growth. Top memes ended 183.5% higher than they began, peaking at gains of 1392.4% on April 26. The market crashed abruptly on April 27, erasing much of the Top Decile Memes Portfolio’s gains and shaving the overall market down to 72.7% of where it started.

Meme popularity changes quickly. Almost no meme steadily appears with more frequency. Investing in memes offers huge rewards to active investors with keen instincts, and nearly nothing for investors looking to buy and hold. We wanted to see how large portfolios of memes performed compared to the top investors. We took the percent gain for both the overall market and the Top Decile Memes Portfolio as of April 27, and ranked them with the gains that the top 20 traders made. 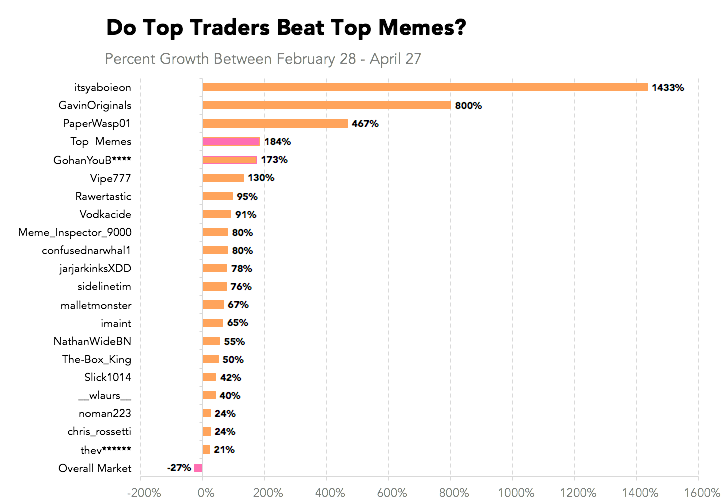 While only the very best traders outperformed the high-growth memes, 37 traders beat the overall market. The market ended down 27%, still outperforming 20 traders. As seen earlier, 25 traders lost their shirts trying to time the market. Our Top Decile Memes Portfolio compares favorably with the median meme trader, who earned a return of 0%.

How do individual traders beat the market—even outperforming the highest growth memes—by so much? Memes often go viral, seemingly popping up overnight. They can become stale quickly, and almost disappear entirely. We looked into changes in daily posts over the 60 days we tracked to find the memes that grew and shrank the most.

The two top-growing memes, Arby’s and backyard sports, appeared 18 times more often on April 27 compared to on February 28. Some memes that were obscure at the end of February were showing up frequently 60 days later, other memes fell from regular use over that time. Memes that shrank the most—like first ranked meme of the month or runner up why not visit—nearly stopped appearing, dropping over 90%.

We investigated the Meme Economy, and calculated the gains and losses of the traders on r/MemeEconomy for the period between February 28 and April 27. A little over half the traders made profitable calls, and the very best made their investments back many times over. Compared to the highest earning trader, itsyaboieon, even a portfolio of the highest-growth memes offers modest returns. Memes can burst into frequent use over a short amount of time, and slip into obscurity just as quickly.