A Look At The Shifting National Budget

In order to funnel $60 billion in additional spending on defense in the United States and funding the border wall and school choice programs, Donald Trump proposed some pretty extreme budget cuts from a large number of national agencies and programs, including the Education Department and the Department of Housing and Urban Development. If his budget proposal gets pushed through, it would be the most startling financial reallocation since the early 1980s during Reagan’s era. The Washington Post takes a deeper look into what Trump’s budget plan would actually do. 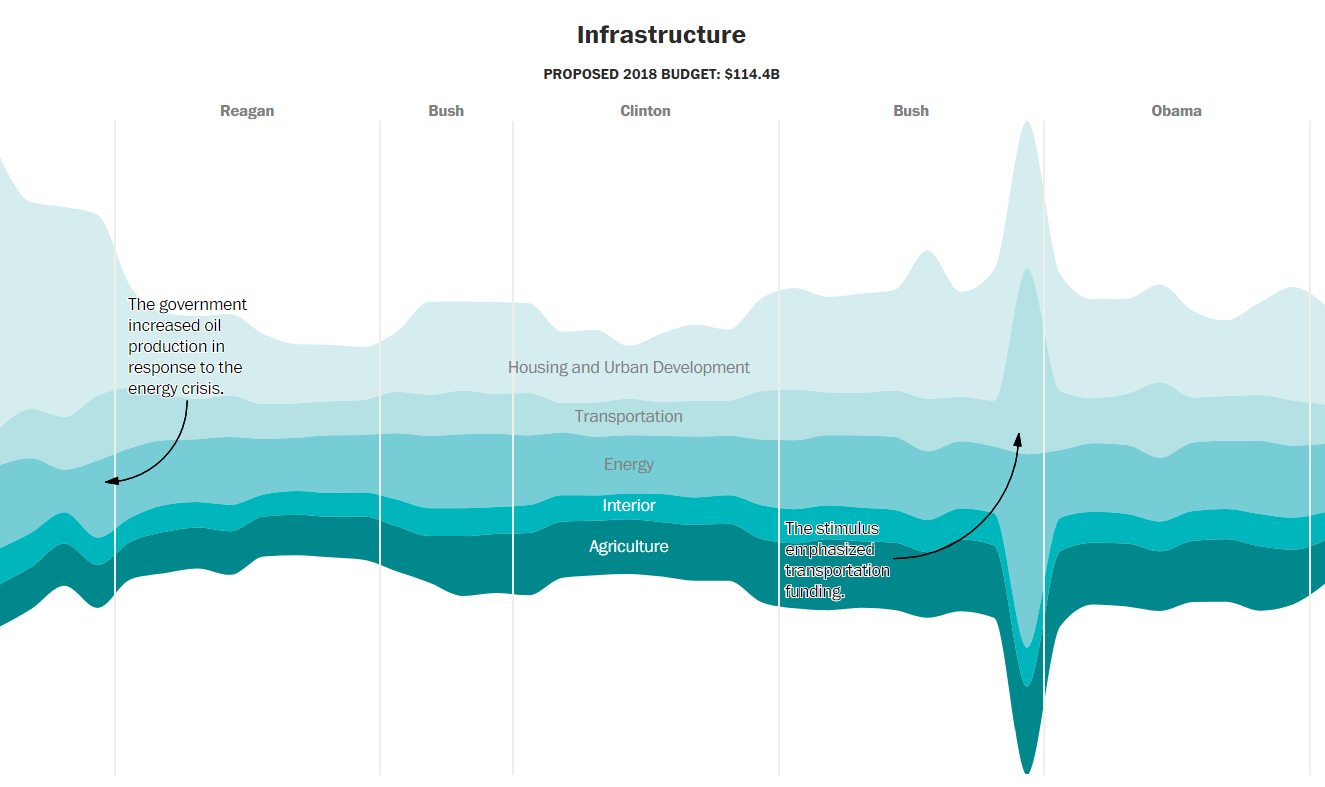 During Reagan’s time in office, the departments that control a majority of the nation’s infrastructure saw significant cutbacks, particularly HUD. Although it was Reagan’s promise to downsize the government that led to a reduction in federal housing financing, a bulk of the budget variations have been due to political and financial strife. The Energy Department’s budget jumped in the 1970s as a result of the surge in oil production during the energy crisis and in the 1980s, during the “farm crisis,” the Agriculture Department saw a similar budget hike.

In more recent years, the 2008 financial crisis led to a great deal of the departments to receive increased finances. But with Trump’s 2018 proposition, all of these departments will have their budgets slashed between 12 and 21 percent, with a majority of the money appropriated coming from research and climate-change-related programs.

“The Treasury Department and Commerce Department are concerned with the government’s finances and the country’s economic growth, respectively. Their funding levels are largely driven by the state of the economy and government budgets.”

In the mid-1970s, the Treasury Department lent out over $1.3 billion (valued at roughly $6 billion today) to New York City because the city government was on the verge of bankruptcy. The jump in the Treasury’s spending in response to New York’s predicament is similar to how other financial departments respond to national financial crises as well. The 2008 housing crisis led to an increase in funding for the Commerce Department and the FDIC saw a rise in spending simultaneously.

Trump’s 2018 plan would result in a 4 percent cut for the Treasury, mainly IRS funding, while Commerce would receive a 16 percent decrease in programs that aid communities impacted by climate change or manufacturing automation.

After the 2001 terrorist attacks, the Department of Homeland Security was established. All of the independent agencies that existed prior to 2011, like Immigration and Customs Enforcement, were then consolidated into the DHS. Between 2001 and 2002, the budget for defense programs—mainly counter-terrorism and immigration—practically doubled. A minor increase in funding also resulted in response to Hurricane Katrina.

The budget changes Trump has proposed would cause an increase in funding by about 7 percent for the DHS, with a majority of the funds going towards building the border wall and increasing the number of ICE agents. The State Department would see a 29 percent drop in funding for programs such as foreign military and humanitarian aid as well as a slash in funding to the United Nations and various international organizations. The Justice Department would see smaller cuts, about 4 percent, and a transfer in money from prison construction to counter terrorism and removal of undocumented immigrants from the U.S. 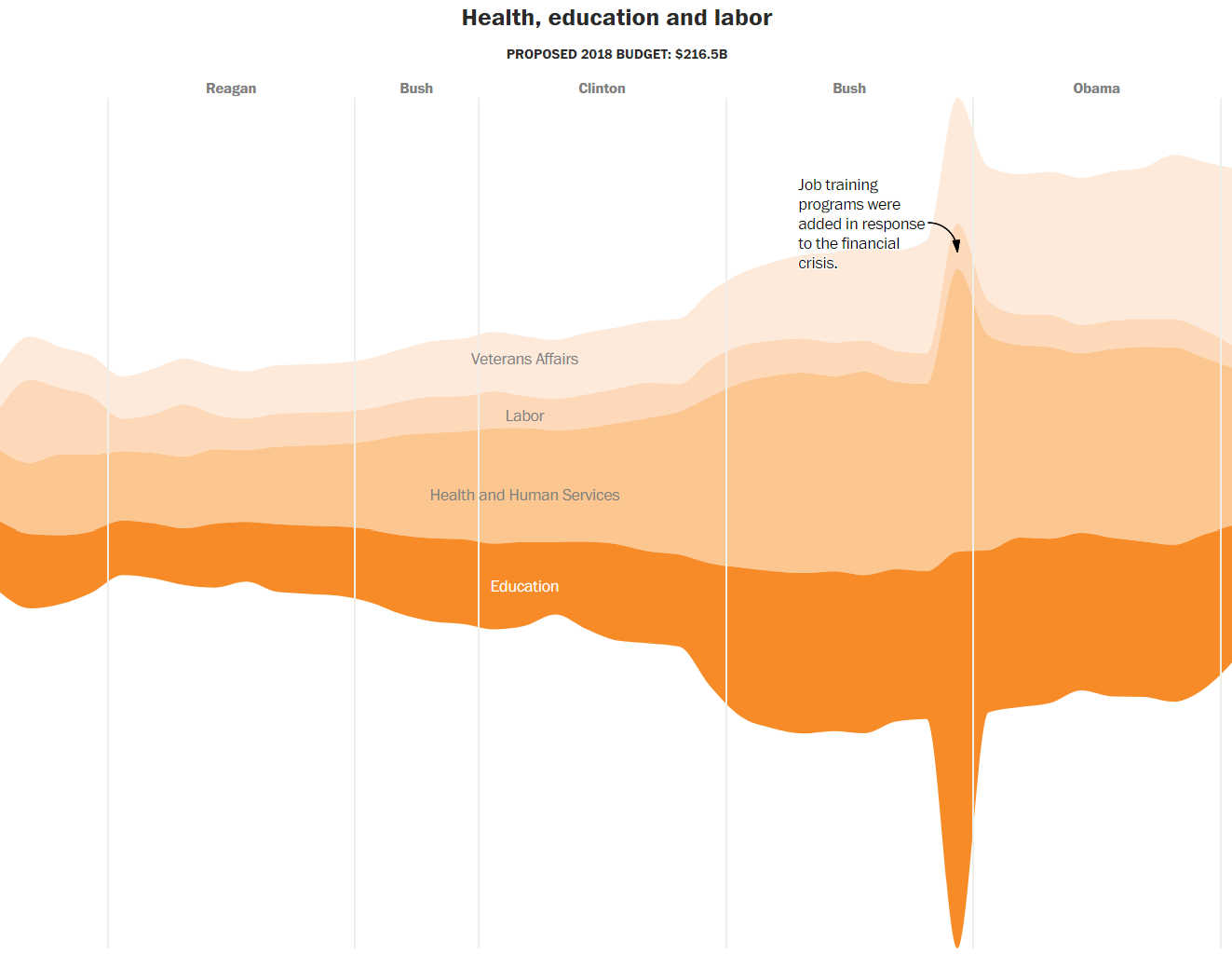 Similar to other categories of the financial plan, funding for these departments tend to change according to the state of the economy. From 2008 to 2009, after the 2008 financial crisis, the Labor Department saw an increase in funds by roughly 50 percent to finance job training programs as part of the stimulus plan. The HHS’s budget also increased during this time by half in order to fund programs such as Head Start and medical technologies.

Trump’s budget plans for these departments seems to bounce a bit all over the place. The VA is looking at a 6 percent increase which would help alleviate some of the veteran’s health-care system backlog, while the Education Department, although it would see a 14 percent decrease overall, there would be an increase in financing school choice programs. Meanwhile, the Labor Department and HHS budget would drop by 21 and 18 percent, respectively.

“The [General Services Administration, Environmental Protection Agency, Small Business Administration, and NASA] vary as widely as their budgets, and they have faced many different peaks and troughs over the past 40 years.”

The General Services Administration, an organization that helps other agencies operate, had a budget increase of nearly twentyfold from 2008 to 2009, a part of which went to finance the construction and repair of government buildings nationwide. The EPA’s budget also virtually doubled during this time and the cumulative agencies within this category went up by roughly a third.

Since then, a majority of the budget increases have been revoked and many of these agencies are looking at further budget cuts. The EPA would lose 31 percent of its 2017 budget along with a fifth of its personnel. A majority of the cutbacks are targeted at research programs dealing with climate change and environmental cleanup. At the same time, Agencies like the Small Business Administration and NASA would see 5 and 1 percent budget cuts, respectively. 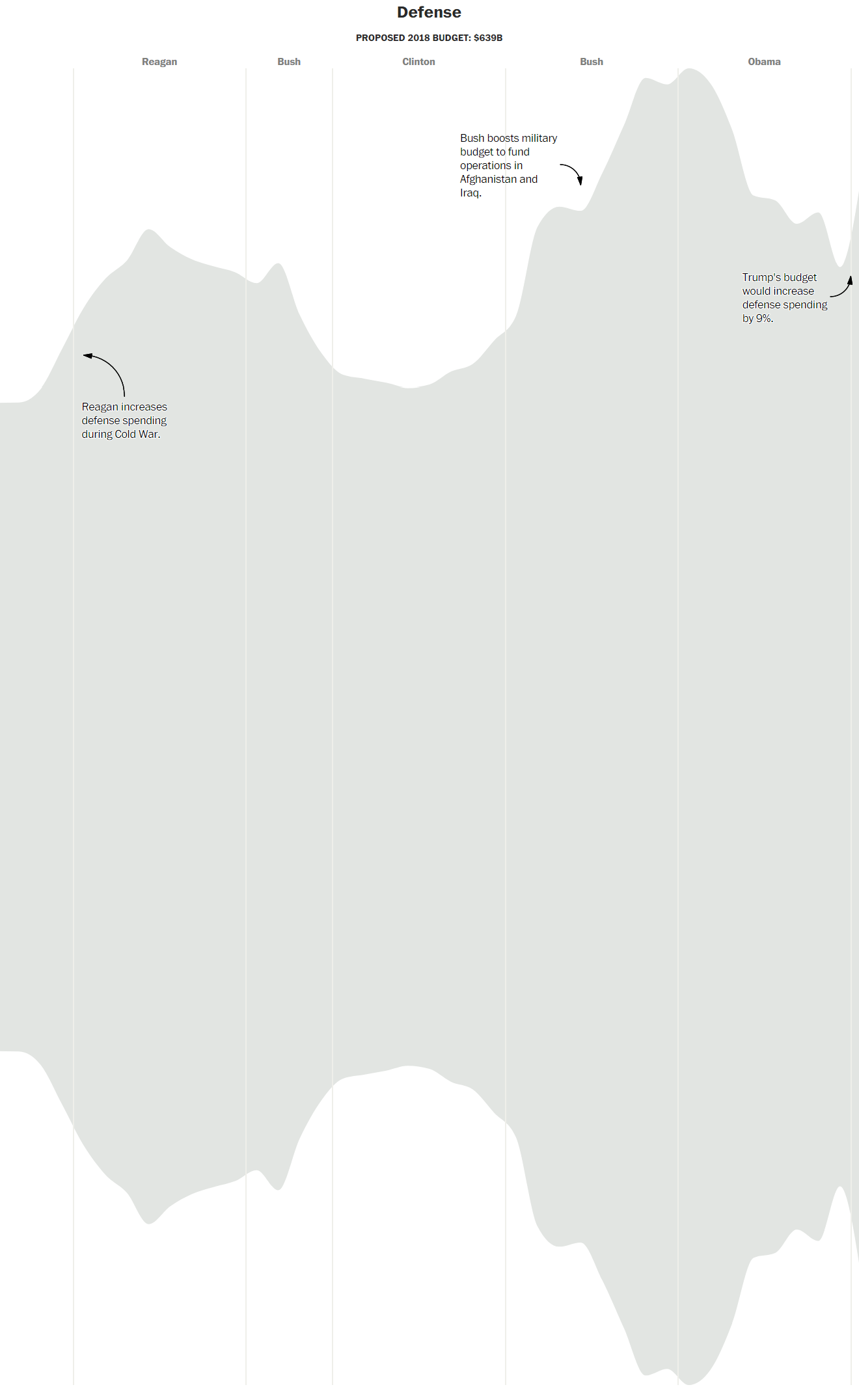 “Defense has long been one of the largest items in the budget, this year comprising nearly 50 percent of discretionary spending. The largest driver of defense spending over the past 40 years has been war.”

The Reagan administration’s response to the Cold war led to increased spending on defense by almost two-thirds. The defense budget saw another extreme hike during the Bush administration in order to finance military operations in Afghanistan and Iraq.

Under Trump’s proposed budget plan, defense spending would increase by 9 percent, roughly $52 billion. Even though that’s more than Obama projected for 2018 and less than what congressional defense militarists want, Todd Harrison, direct of the Defense Budget Analysis at the Center for Strategic and International Studies said, “It’s in line with what you’re expecting to see.”