Where Is Craft Beer Most Popular In America?

It’s difficult to miss the degree of variety beer lovers can enjoy at this moment in the US. This is due to the explosion of small breweries coming on to the scene, which emphasize experimenting with flavors and styles

Over the past 40 years (thanks to deregulation in the beer industry) the number of breweries in America expanded from a post-prohibition low of under 100, to over 5,000 in 2016. The bulk of this growth comes from small breweries, the most familiar to consumers being the microbrewery.

According to the Brewers Association, a trade group for American craft brewers, a microbrewery is any local and independent brewer that sells fewer than 15,000 barrels of beer per year and sells at least 75% through other bars, restaurants, and liquor stores.

Unfortunately, it’s not the case that you can walk to your local liquor store and choose from 5,000 different breweries to bring home tonight. The reach of small breweries are confined to particular markets as most microbreweries have limited and local distribution. The variety from these small craft breweries is typically limited to the state or metro area the brewery where the brewery is located. The fact is, some areas of the country are just better for beer aficionados who want lots of options.

So where do you have the best chance to sample the greatest variety of beer possible? Which states and cities have the most breweries overall?

We analyzed business listing data from Priceonomics customer Datafiniti to offer some perspective into that. This data set included the listings of craft breweries along with their locations. We combined this with supplementary information from the Brewers Association catalog of breweries, to offer more specific details. From our analysis, we are able to find out in what parts of America breweries reign supreme.

We found that cities in the Pacific Northwest and Colorado are your best bet for finding the most breweries in one place. Cities along the coasts and in the Midwest are also solid destinations. There are also some exciting small cities outside of this trend that should not be overlooked (like Asheville, NC). Vermont is the state with the most craft breweries per capita, while Boulder, Colorado is the city with the highest density of craft breweries.

To begin our investigation, the natural starting point is to look at the state level. So, which state has the most breweries? 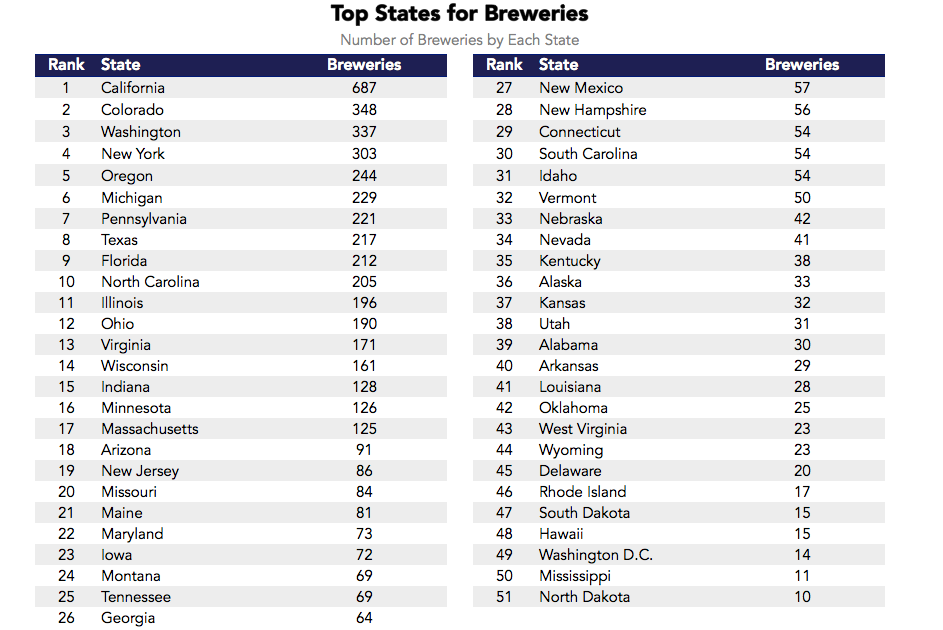 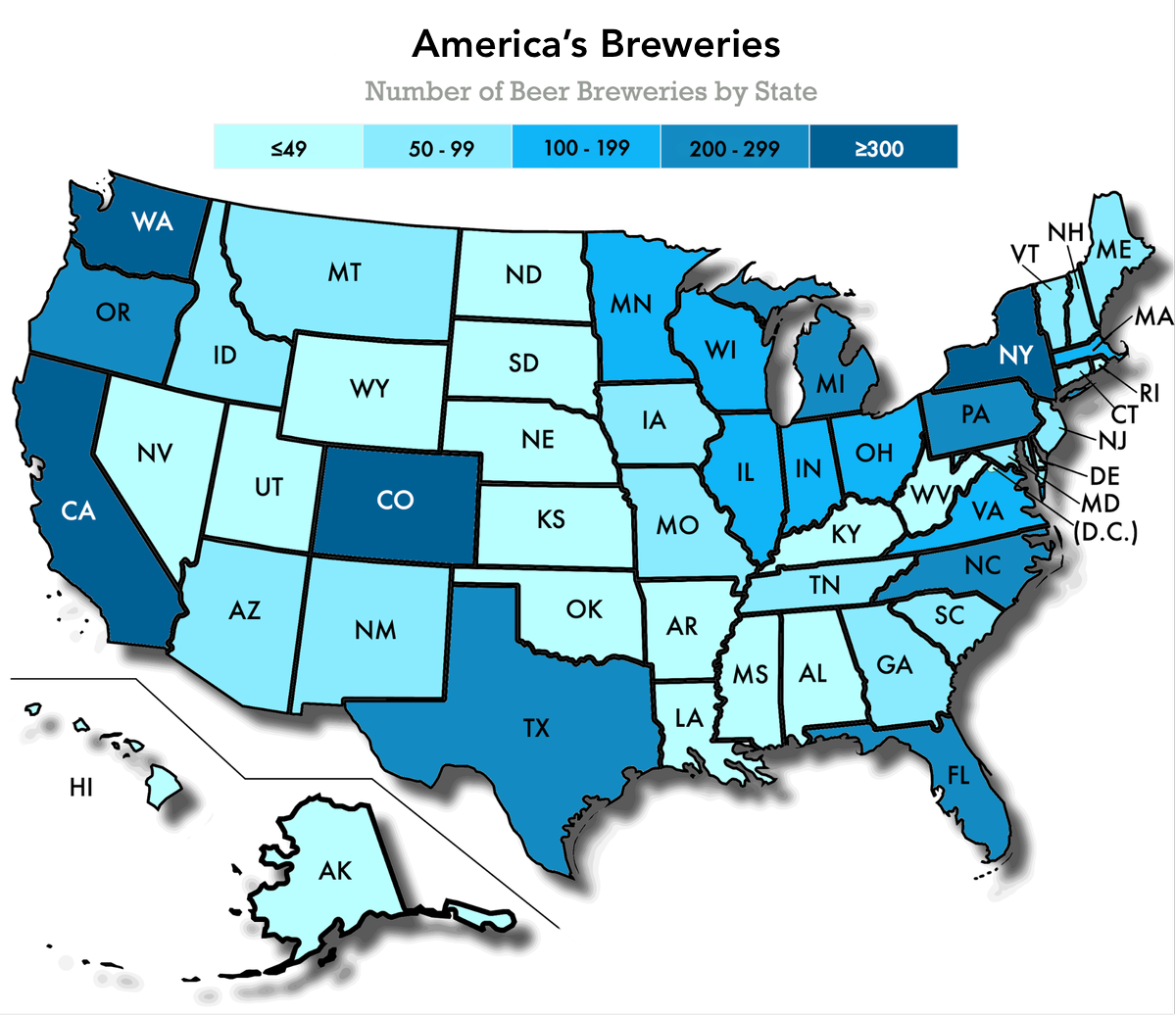 Number one is California by a serious margin, with over 600 breweries. Colorado and Washington are the next closest with about 350 each. With 15 or fewer breweries, Hawaii, Mississippi, Washington D.C. and North Dakota are at the bottom of our list. Overall we see a greater number of breweries in coastal states, as well as the Great Lakes region.

Colorado is an outlier in this overall trend, but that’s because it independently developed one of the most distinct state beer cultures. It is both the home of a brewing giant, Coors, and a major player in the craft beer revolution. Really driving home the importance of brewing in the state is the fact that the current governor was a cofounder of one of Denver’s first microbreweries.

Looking at the information in absolute terms skews our list towards the larger states with greater population. It’s intuitive that states with more people (and therefore more beer drinkers) would be able to support more breweries. Understanding the number of breweries per capita will tell us where breweries are most plentiful relative to population. 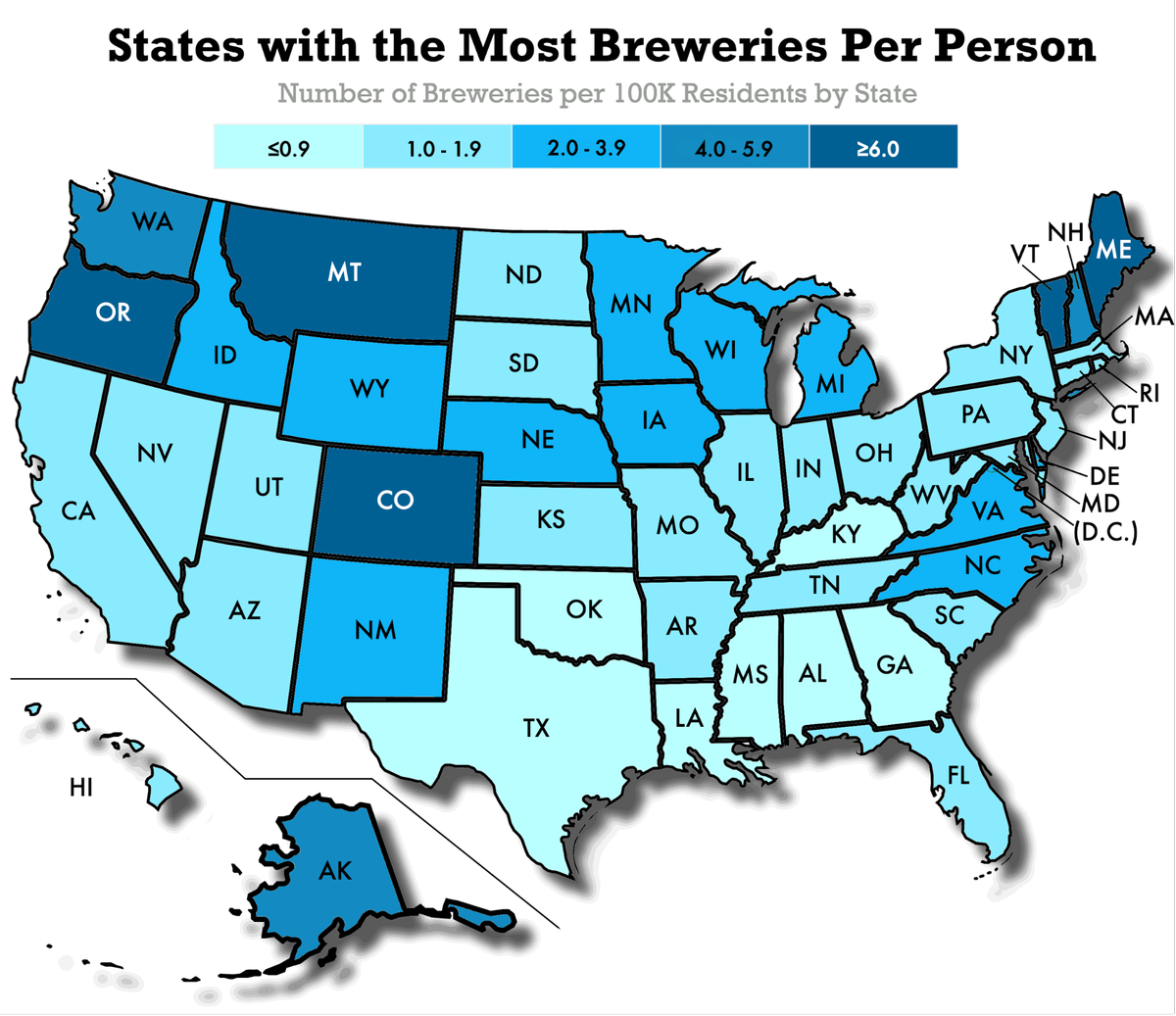 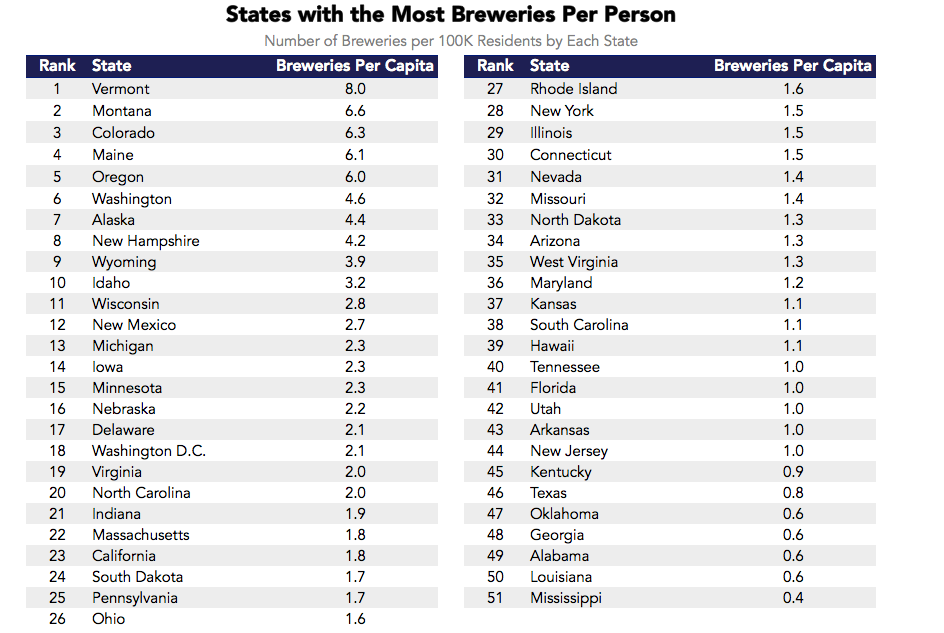 Vermont has a strong craft brewing tradition. After changes in state law in the late 80’s allowed more small breweries, there was a dramatic increase in brewpubs (brewery-restaurant hybrids that brew the beer they serve on site) and later microbreweries. Another interesting inclusion is Montana. Its craft brewing sector has grown over the past several years, with industry production increasing by 50% between 2010 and 2013. Maine is also experiencing a recent boom with an increase from 34 breweries in 2011 to 59 in 2015.

Breweries have always been tightly connected with cities. In the wave of immigration from Europe, immigrants came into cities and brought their beer making traditions. In fact, before prohibition there were just as many breweries in America as there are now (each much smaller in size and production, of course).

From Brewerytown in Philadelphia, a neighborhood on the National Register of Historic Places, characterized by the remains of the ten breweries that once stood there, to New York City’s host of former breweries, run mostly by German immigrants – our early cities loved beer.  Cities were important because of their access to clean water, available labor, and ease of distribution. Prohibition destroyed the industry and the remains of this era are gone, but the importance of cities is still apparent today for many of the same reasons.

For this analysis, we looked at Metropolitan Statistical Areas, geographic areas with high population density which are interconnected economically and socially. This is because, for the purposes of what beers are available in which markets, city boundaries are not the best markers. For example, San Francisco is highly interconnected with other cities in the Bay Area such as Oakland (both are part of the San Francisco-Oakland-Fremont, CA MSA). A beer brewed in one city is likely available in the other.

So, which MSA has the most breweries? Where is our the US brewing capital? 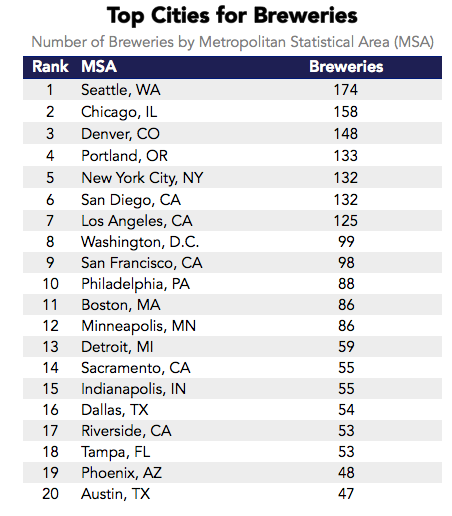 Seattle-Tacoma wins that title with 174 breweries. Other top MSAs include Chicago, IL, Denver, CO, and Portland, OR.

Similar to the case with the state analysis, it is important that we not only consider absolute number, but also breweries per capita. 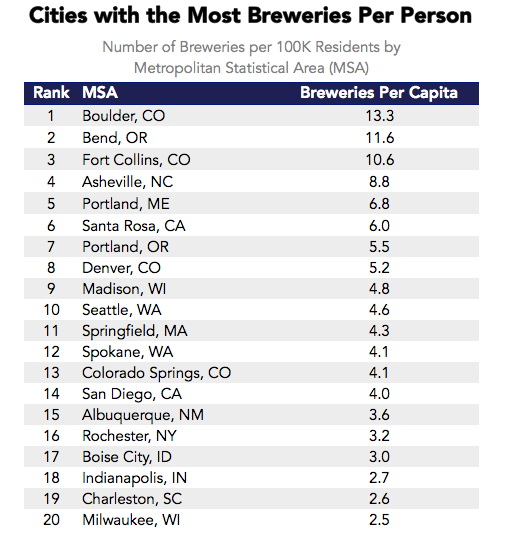 Boulder, CO is our top MSA with 13 breweries per 100,000 persons. Boulder is a key contributor to the rich brewing tradition of Colorado (mentioned previously) and had a strong homebrewing culture in the late 80’s. In fact, Colorado has the most metropolitan areas on our list, with Fort Collins, Denver (host of the Great American Beer Festival) and Colorado Springs in addition to Boulder.

A few other metropolitan areas are worth noting because they are different than what most people would expect. Asheville, NC is the only city in the South on our list. Craft brewing grew here in late 90’s and it has since been named the best beer city in America by several publications. Also the city of Portland is an interesting case, but not the one you’re thinking of. It may be surprising, but Portland, Maine is actually ranked higher than Portland, Oregon.

You are now equipped with a comprehensive and exhaustive survey of American breweries. By digging into the number we can see that if you want a variety of breweries to choose from, your best options are cities on the West Coast or Colorado, but you really can’t go wrong in most big cities.