Here Are All The Goods The U.S. Actually Imports From Mexico A Year

One of the promises that Donald Trump made while on the campaign trail and after his election was to bring about discussions about the North American Free Trade Agreement. In his mind, NAFTA has been a “catastrophe” for American workers and needs to be renegotiated in favor of the U.S. He has even expressed his desire to implement a 20% import tax on all products coming in from Mexico to finance his promised border wall.

Currently, roughly $304.6 billion in goods that pass over the border from Mexico are untaxed under NAFTA. The idea of a blanket tax on all goods may not, however, be the most appropriate way to go about taxing these goods.

Quartz collected data from the U.S. Census Bureau—product categories, the amount imported, and the tax collected—to give a snapshot view of exactly how much money the U.S. spends on goods coming from Mexico and how much of the U.S.’s international purchases come from Mexico. Typically, these are the two components that policy makers consider when deciding what merchandise or product categories to tariff.

Categories include vehicles, other than railway or tramway rolling stock; articles of iron or steel; fish, tools, implements, cutlery, and flatware of base metal; trees, plants, bulbs, roots, cut flowers and ornamental foliage; and photographic and cinematographic goods to name a few. 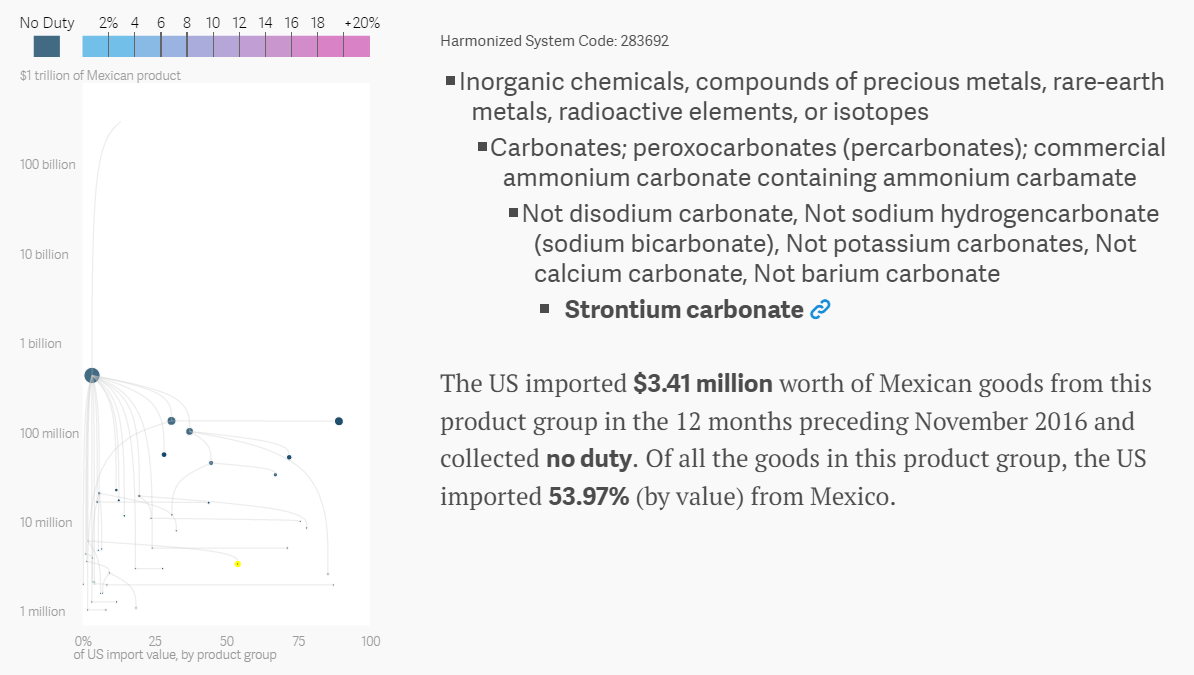 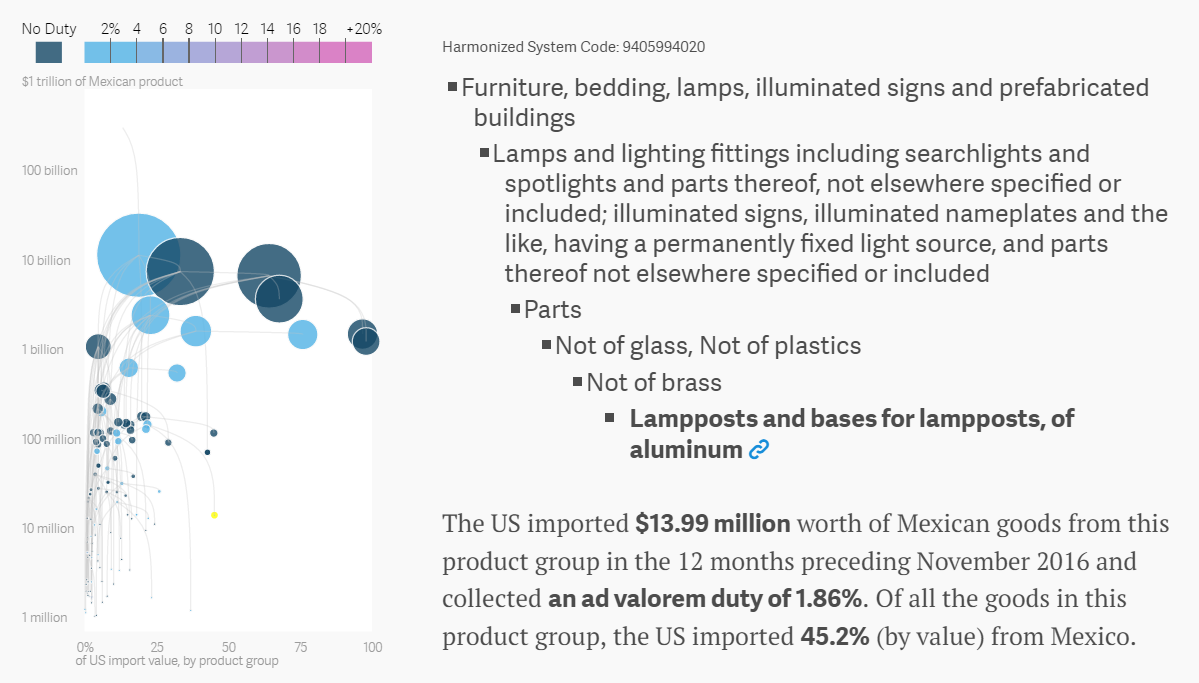 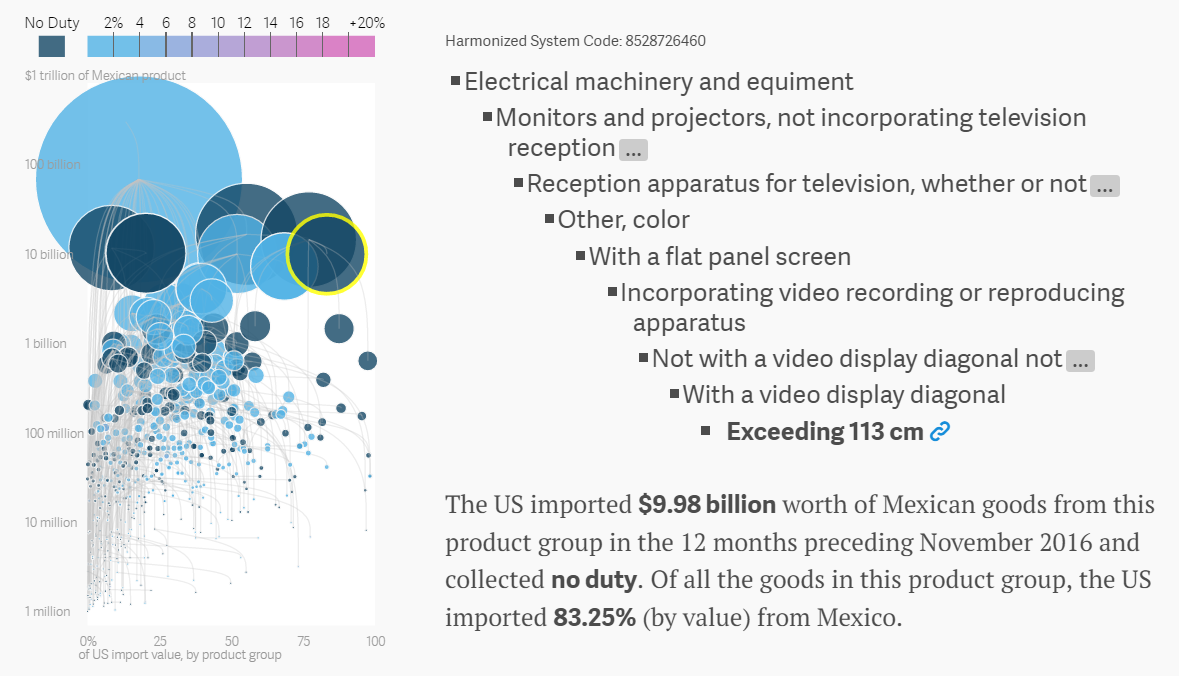 According to the data they collected, almost two-thirds of the trade categories had no taxes collected on products coming in from Mexico and essentially no tariff was collected on 92% of the categories.

So, would a blanket tax be the best course of action? Considering the U.S. depends solely on Mexico for many products, the taxes would basically just be imparted on to American consumers. Also, there are products that the U.S. can obtain from other suppliers and products that the U.S. gets very little of from Mexico. This means that a tax may not be as effective as the Trump administration would hope.

Avocados: “Mexico is the world’s largest grower of avocados and the U.S. is the largest buyer. No duty is collected on them at the border.” Glass-bottled beer: “63.4% of U.S. imported beer is brewed in Mexico. Most of it—$2.8 billion—comes in glass bottles and enters the U.S. tax-free.” Plastic Ladders: “America buys 97.2% of the plastic ladders it imports from Mexico, $191.5 million in trade.”

Class 2 vans and trucks: “The second-most valuable import product category, $12.3 billion, is smaller vans and full-size pickup trucks. 99.6% of these U.S. imports come from Mexico.” Certain aircraft turbine parts: “Mexico supplies the U.S. with $570 million of these unfinished parts but that’s only 4.7% of what the U.S. imports.” Lithium-ion batteries: “The U.S. imports just 3.1% of its lithium-ion batteries from Mexico but that still amounts to $17.4 million in trade.”

Check out the full set of data visuals here.