Gun Control: What Experts And Americans Agree On

Lately, there has been a lot of talk in the U.S. about gun control. Citizens and politicians find themselves on both sounds of the debate about whether more stringent laws would affect gun-related violence. The intense discussion stems from the increase in gun-related deaths and mass shootings that have occurred throughout the U.S. in the past decade. These discussions are undoubtedly accompanied by a long list of gun control ideas. The Upshot takes a look at 29 leading ideas to determine which solution the public and experts most agree upon.

The Upshot asked experts over at Morning Consult, a media and polling firm, to survey gun violence experts—lawyers, public health officials, and social scientists—on 29 different policies and their effectiveness at lowering gun-related homicides and looked at how the results compared to the policies popularity ratings among American citizens. The policies were then charted with popular, more effective approaches in the upper right corner and less popular, less effective measures in the lower left. 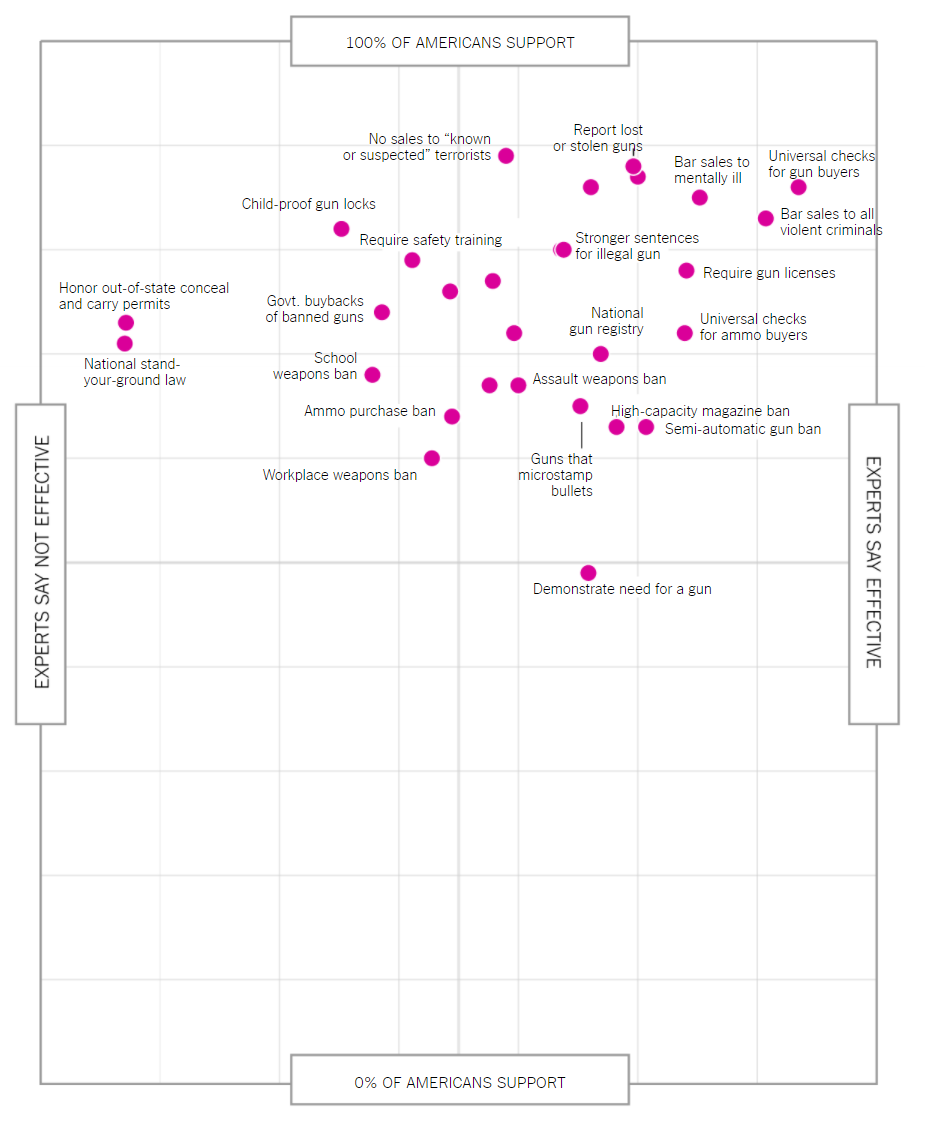 According to the experts, the most effective policies was one that requires gun sellers to run background checks on all potential buyers and another that prevented gun sales to anyone convicted of violent misdemeanors. On the other hand, experts were least drawn to the idea of states honoring out-of-state concealed weapon permits.

Although there is a clear separation in views over gun control and gun rights among Americans, the distinct measures put forward have been generally popular. In the survey conducted, policies like comprehensive background checks and preventing convicted stalkers from obtaining guns were backed by over 85 percent of registered voters. Even the least popular policy was approved of by almost 50 percent.

“We think of guns being an incredibly controversial topic, but what your polling shows and our has shown is there’s a whole lot of gun policies that really aren’t controversial,” said professor and director of Johns Hopkins center for gun policy and research Daniel Webster.

However, just because the public supports a policy doesn’t mean it will become legislation. Donald Trump, along with the Republican Congress, has done little to move measures forward that would rein in gun ownership. 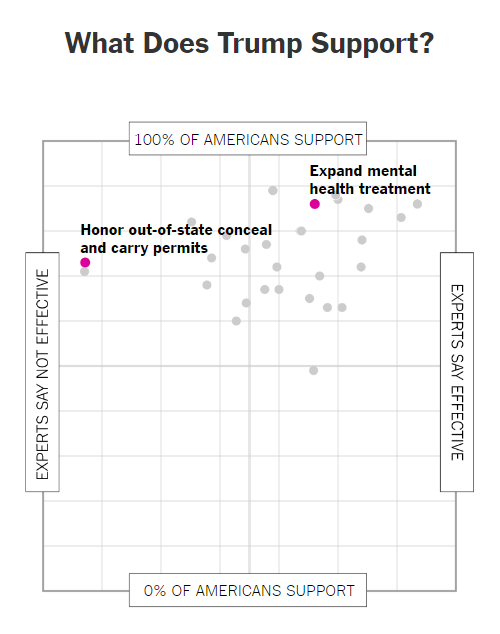 Prior to his campaign, Trump indicated that he supported a few of the more favored measures. It wasn’t until he entered the presidential race that he began to come out in strong opposition to limiting gun rights for Americans. Since his election, Trump has backed interstate concealed carry permits and supports a lift on gun restrictions in schools and military bases.

The bill that requires states to honor out-of-state concealed carry permits ranks as one of the worst performing ideas on the matrix created by Upshot. Although many of the experts surveyed said they did not believe the bill would be capable of reducing firearm homicides, a bulk of Americans still supports it.

Trump, in fairness, also proposed more treatment for those with a mental illness, an idea that ranked better among the public and experts alike. 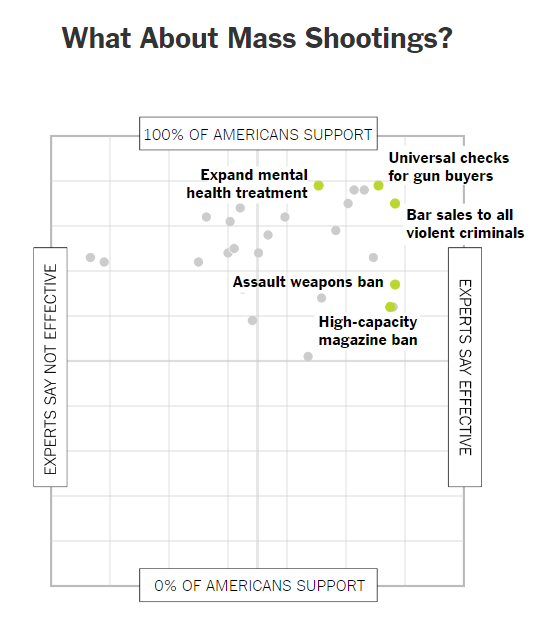 The survey also covered policy effectiveness in regards to mass shootings, incidents which make up roughly 1 percent of firearm-related homicide deaths. Many of the preferred measures stayed about the same, but bans on assault weapons and large-capacity magazines or restrictions on ammunition purchases were determined to have more of an effect on mass shootings than everyday gun violence. Although experts acknowledged that those policies wouldn’t scale down the number of mass shootings, the new limitations and restrictions may be able to reduce the number of lives taken in those circumstances. 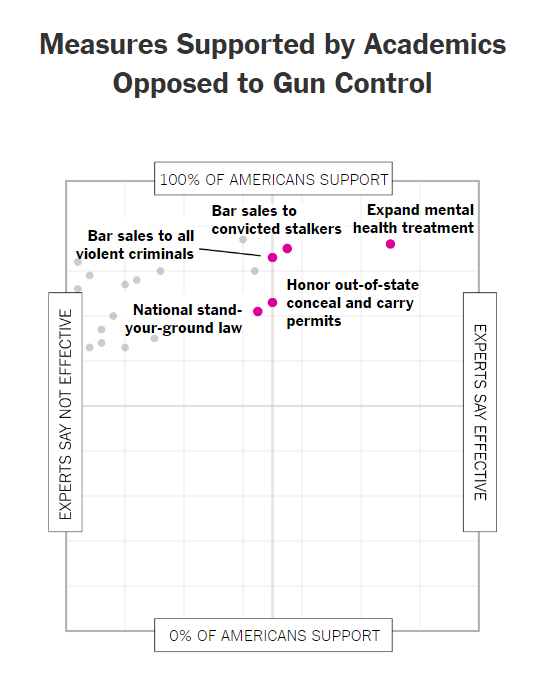 Of the panel of experts questioned for the survey, a majority favored gun control policies while only five said they were in adverse to them. With that said, the five experts that oppose gun control were more likely to rate ideas as less effective compared to their colleagues. But some policies, like expanded screening, treatment of mental illness, and restrictions on gun sales to people who have been convicted of stalking, were still considered effective in reducing gun homicides.

In general, the experts that were more reluctant towards gun control policies were just broadly opposed to blanket policies. “The essence of a ban is it applies to everyone equally, at least theoretically,” said emeritus professor of criminology and criminal justice at Florida State University Gary Kleck. “But in practice, criminals, being criminals, don’t obey the law.” 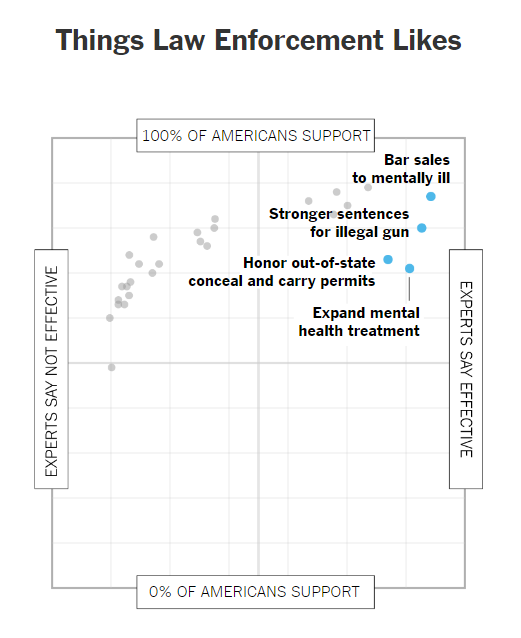 The survey also included two law enforcement groups. The responses, which came from almost 100 police officers and chiefs, were not combined with the responses from the academic experts but looked at separately as a representation of only a small percentage of the law enforcement community.

The responses from the law enforcement professionals revealed that, compared to academic experts, many support policies that advocate civilian use of firearms for defense against crime. On the opposite end, law enforcement was leerier of policies that would ban certain firearms or restrict individuals from carrying guns than academics.

Because the survey combines the two groups of law enforcement to determine policy approval, it is hard to determine what the differences may be like between them. While research has shown that police chiefs are more likely to back measures that restrict access to firearms, police officers tend to gravitate towards gun rights.

Read more about other aspects of their study not included in the surveys or charts here.