What You Should Know About A Weakened Mexican Economy

During his campaign and following his election, Donald Trump has repeatedly declared his plans to break up NAFTA, build a border wall and “make Mexico pay for it”, and implement sizeable tariffs on Mexican imports. All of these measures would considerably weaken Mexico’s economy which would in turn also hurt the  U.S.

These policies would not only put the American economy at risk but a weakened Mexican economy could also prove to be a security threat to the U.S. Findings in international relations have shown that political instability can result from poor economic conditions. Furthermore, this type of catalyst is likely to cause more severe political instability resulting in protests, coups, and revolutions.

This economic domino effect is evident in the Arab Springs protests that occurred across Egypt and the ongoing turmoils in Brazil and Argentina. An example that hits a bit closer to home would be how the Great Recession in 2008 lead to the tea party movement and Occupy Wall Street, both which still continue today.

The relation between a weakened economy and political instability isn’t a one way street, though. According to a 1996 study by Alberto Alesina and Roberto Perotti, when a weakened economy, particularly one that increases economic inequality, sparks political instability, the economy, in turn, is also hurt. Destabilization plants feelings of uncertainty which leads to fewer investments, reduced productivity, and governments and families become less concerned about education and training. The situation in Syria is a worst-case example of how this cycle can play out. Protests were countered with violence, which then transformed into an uncompromisable war, which caused Syria’s economy to become almost entirely annihilated, therefore making political restoration even more difficult.

Now, if we were to think about the impact this could have on Mexico, even if some of Trump’s policies somewhat make it through, there would be some serious economic and political fallout in the country. Some major concerns in Mexico that can result from economic pressure are corruption, drug trafficking, and violent crime, all of which escalate when officials and citizens are put in desperate conditions.

The citizens that would be heavily affected by Trump’s policies are Mexico’s middle class. The resulting prince increases and unemployment could lead to protests, the election of officials with extreme anti-American policies, and conflict between social groups along with the increase of crime and corruption.

So let’s just say that Trump is right and America cannot afford to be concerned about other countries other than itself. However, research repeatedly shows that instability in one country negatively impacts the surrounding region in terms of trade, defense spending, and human capital accumulation.

Analysis of 118 countries over a 25-year period has shown exactly how domestic instability affect regional instability. Although the chart below may not look like significant from an economic or financial standpoint, the correlation is compelling from a political science viewpoint. 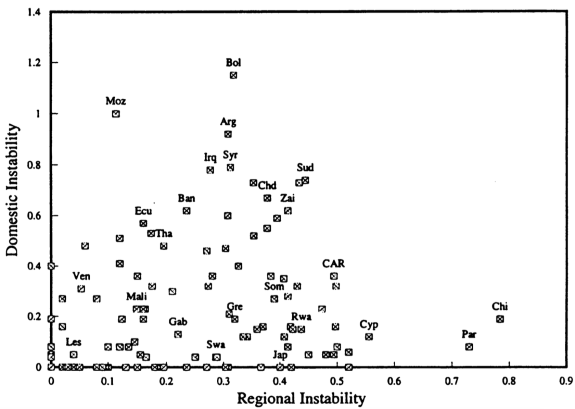 A good way to summarize the situation in Mexico and any potential consequences that may spread to the U.S. is described by FiveThirtyEight’s Andrea Jones-Rooy as so:

“[E]ven mild destabilization [in Mexico] could increase the risk of instability in the U.S. More discontent in Mexico as a result of a plummeting economy will mean more angry, armed people close to or attempting to cross U.S. borders. Weakened investment in human capital in Mexico means either more people seeking education in the U.S. or more unskilled workers crossing into the U.S. seeking a job.”

Aside from increased immigration tension from Mexico to the U.S., a more pressing concern is the potential for issues such as pollution, disease, and viral outbreaks from crossing the border.

Although you may want to think that these issues seem distant and may not affect you any time soon, Mexico’s economy is presently exhibiting signs of instability.The value of the peso has dropped, protests against Trump have already broken out, and a U.S. consular agent in Mexico was also recently attacked, all of which points to a weakening Mexican political landscape. 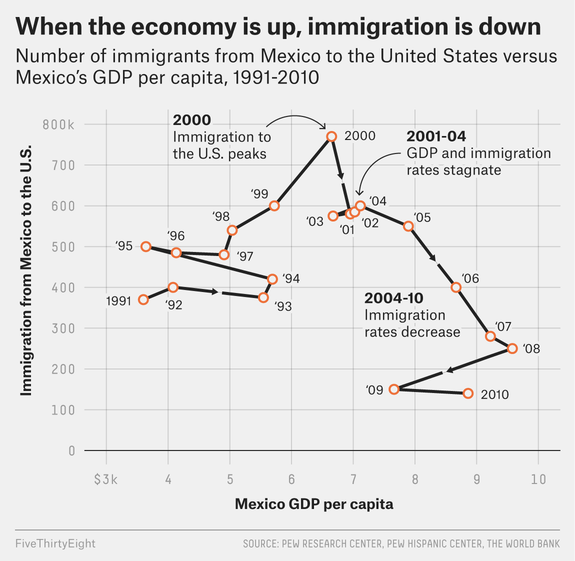 It is still possible, though, that Trump’s policies, which haven’t been set in place yet, won’t prove to be as damaging to Mexico than suggested. But based on past circumstances and empirical findings, any policies that negatively affect Mexico will in all likelihood damage U.S. politics and economics as well.