If you have a family or you’re planning on starting one, good schooling is definitely something that you’ve thought about. For many city-dwelling families, it’s not unusual for them to make the transition from city life to the suburbs for better educational options and more space. But not all suburbs are similar and school district boundaries can make housing less affordable.

Although there are many elements to consider when determining a home price, economists have found that a 5 percent boost in test scores may raise housing prices by 2.5 percent in suburban neighborhoods and is, in fact, a common practice in many cities. But not all districts follow this model. Some schools can be found in districts that still have homes on the affordable side. 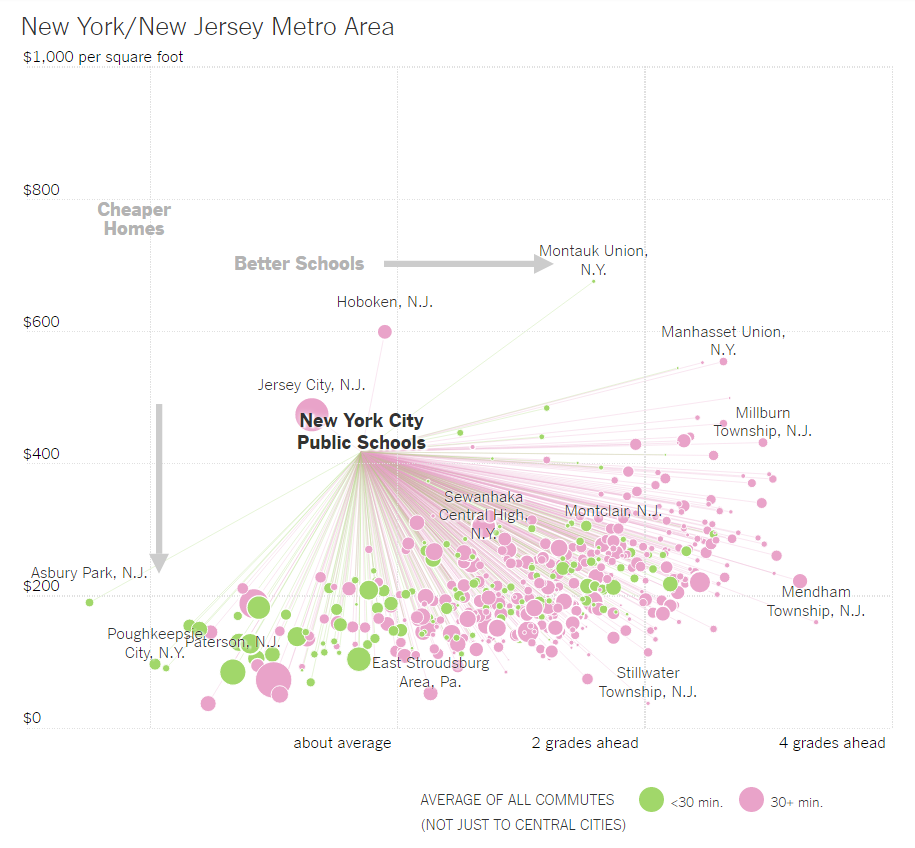 Their study found that some locations, such as cities with good public transit, the desire to live in the city center is more of a priority than school quality. The homes in these locations are typically more costly than homes farther from the city center and the study found that the prices in urban location have increased more rapidly than in the suburbs since 2000. 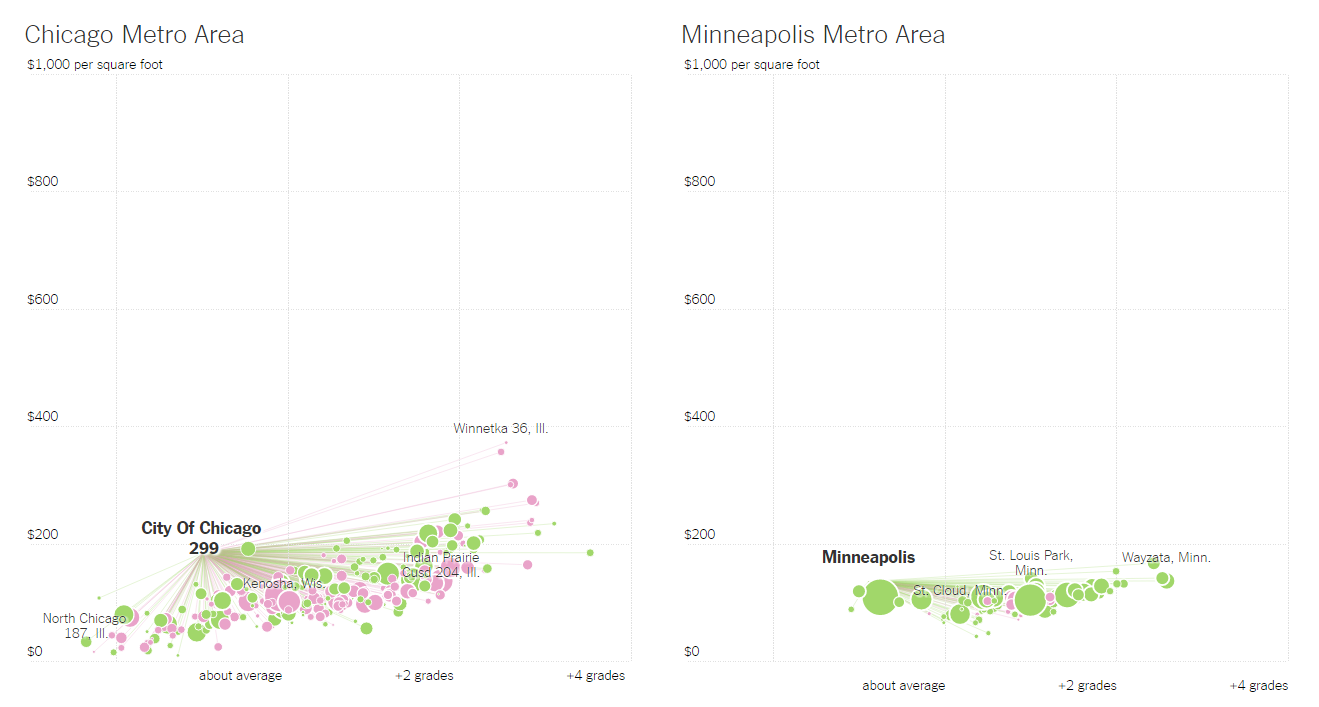 The most extreme example of this is found in the Bay Area. Many homes in the central city are so expensive, homeowners in suburban cities like San Ramon pay several hundred dollars less per square foot, a considerable price jump considering the schools are far better in San Ramon than in San Francisco. A point to consider, though, is that many of the city-dwellers might not have children yet, they might not want any children, or their children have already left the home.

Of course, these data displayed in the charts are district averages and there are variations depending on the city size (the larger the city, the greater the variation). Typically, though, those who choose to live in the suburbs end up saving money but the compromise is that they generally have longer commutes and don’t have access to urban amenities. 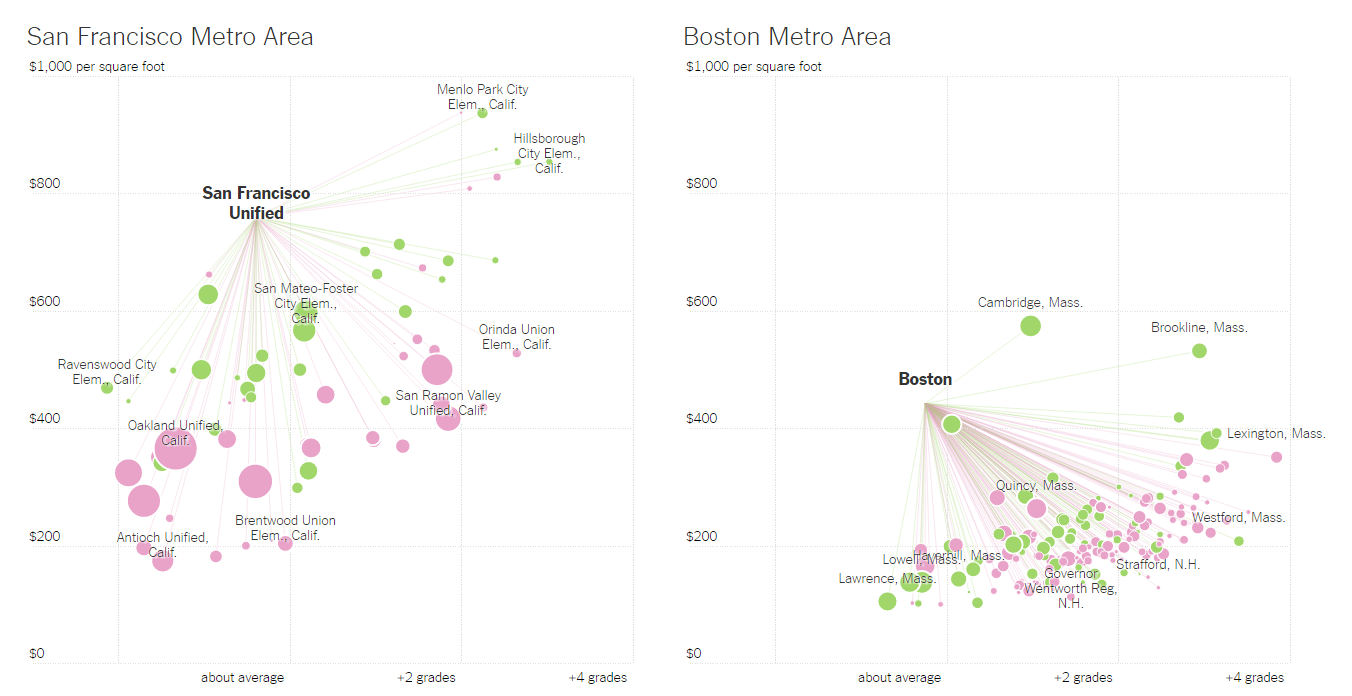 The Bay Area, New York, and Boston all have very similar characteristics: homebuyers’ desire to live in densely populated areas and a large portion of the population walks, bikes, or regularly takes public transit. Since a majority of the population in the rest of the U.S. drives, this creates a stark contrast between those living in metropolitan areas and those living in other locations across the country.

“Cities that have highly dense, highly urban center: The premium is higher in those places,” said Redfin’s chief economist Nela Richardson. “But in places like Phoenix, L.A., Dallas and Atlanta, the trade-off between living in the city and the suburbs is not as great, so why not go to where the best schools are and homes cost the least?”

Head on over to their site to get a better look at each district.