Read Or Watch: How Do Americans Prefer To Get The News?

According to a Pew Research Center survey conducted last year, more Americans would rather watch the news (46%) than read it (35%) or listen to it (17%). Surprisingly, though, these numbers fluctuate considerably by age. According to the study, more Americans aged 50 and older preferred to watch the news over alternative methods: 52% of 50-64-year-olds and 58% of those 65 and older favored watching the news, whereas 29% and 27% respectively would rather read it. For Americans below the age of 50, about four-in-ten of those aged 18-29 and 30-49 preferred to read rather than watching it.

A deeper look into each method found that younger adults read most of their news through digital text instead of through traditional print methods. 81% of the 18- to 29-year-olds were found to have favored online means, while just 10% opted for a print newspaper. The results for those in the 30- to 49-year-old group were similar. Adults 50-64, however, were more equally divided between web-based news (41%) and print (40%). For those 65 and over, a vast majority still preferred to read printed news (63%).

The survey also found that the younger adults that favored watching their news were also becoming more likely to watch on a computer rather than on a television. 57% of the 18- to 29-year-olds stated that they preferred to watch the news on a television, but 37% said that online news sources were their preferred method. That number is higher than the other age groups and is double the amount of the 30- to 49-year old adults. 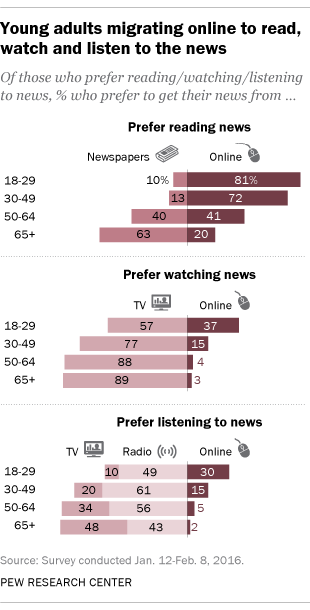 Even though the number of those that listen to the news isn’t as high as the other two categories, the survey showed that 18- to- 29-year-olds in this category were also making the transition to digital methods, roughly twice that of older listeners.

Although younger adults are generally less interested in the news, the research shows that when it comes to digital means, they are receiving news at equal or greater rates than older Americans and the shift to digital is continuing to increase.