A Look At The Network Of The Global News Landscape

The digital age has helped to transform the way people receive their daily news and how stories spread. When print was the main method for delivering news, publications would credit the originating outlet with a little blurb like “as stated in The Wall Street Journal.” Digital news stories, however, generally include a hyperlink to the initial story and sometimes links to competing outlets that covered the current story in more detail. This linking creates a web of interconnected global news that allows researchers to understand news outlets and the bodies that direct global news.

The GDELT Project, an open global database of society by Google Jigsaw, monitors global broadcasts, print, and online news from every country in more than 100 languages. What they’re doing is identifying what drives our global society by looking at the people, locations, organizations, quotes, images, themes, and events happening every second of the day. The goal is to create a free open platform for analyzing the entire world.

The project is explained as so:

“The GDELT Project is an initiative to construct a catalog of human societal-scale behavior and beliefs across all countries of the world, connecting every person, organization, location, count, theme, news source, and event across the planet into a single massive network that captures what’s happening around the world, what its context is and who’s involved, and how the world is feeling about it, every single day.”

Last April, GDELT began to document a list of all the hyperlinks it could find in the body of every online article while ignoring extraneous links found on the page in the headers, footers, navigation, and the like. This allowed them to analyze article linking procedures and form a link graph depicting how each news site is connected to the sites its articles linked to.

GDELT looked at 121 million online articles containing hyperlinks in the article body over a 10 month period. Altogether, the articles contained 727,275917 links and culminated in 13,380,807 different couplings, meaning one site had one or more links to another. Although no system can survey every daily online news coverage in the world, it is possible to look at a significant sample from close to every country in the world.

Exploring the online news network allows researchers to look at the global news landscape on a macro-level. This creates a better understanding of the linking structure in the online news community. In order to focus on this network, GDELT filtered the 727 million outlinks to narrow their analysis to links that were also monitored by Google News over the same 10-month period. 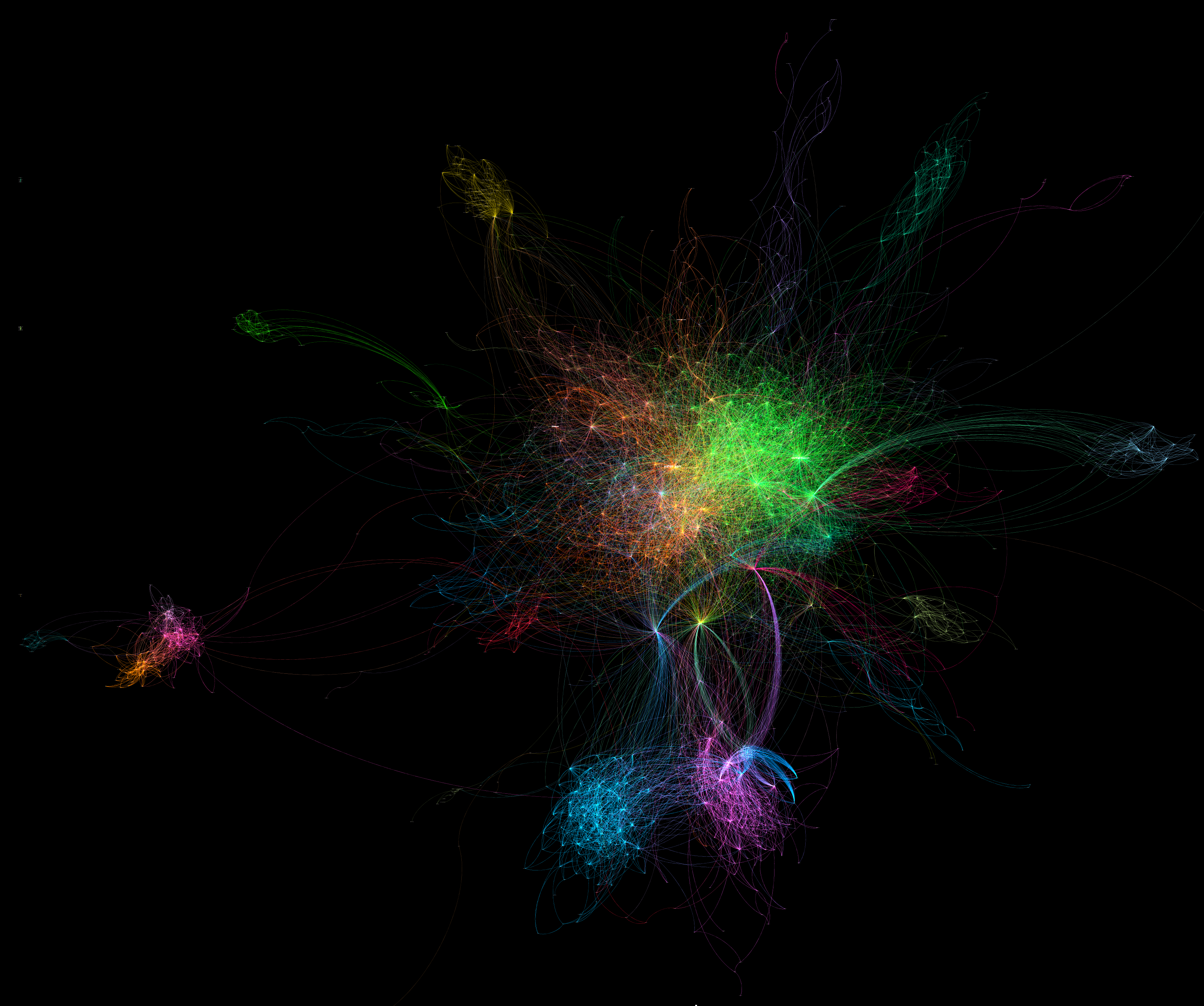 The resulting visualization of their analysis shows 10,000 of the most substantial connections between news outlets. Each outlet is represented by a node with the lines between each node representing pairs of outlets that frequently link to each other. Outlets that linked to each other more regularly than to others are grouped together and tagged in the same color. Larger nodes were assigned to news outlets with a higher PageRank, meaning they are considered more “globally important” than other outlets.

From the graph, it can easily be seen that high-PageRank outlets—the “global media core”—are exceedingly interlinked, meaning they regularly cite each other more rather than linking to smaller local outlets. At the same time, the small outlets tend to link to major outlets rather than to other small outlets.

You can click on the image for the full resolution version or check out the interactive. Also be sure to check out the project page for more information.