We recently covered a project Google News Lab did called The Rhythm of Food about how food trends have changed over the years, but to celebrate 2016, they worked with Polygraph to create The Year in Language 2016. The project is simple: Google analyzed all the word searches from throughout the year to reveal how society embraces new words.

They identified 2016’s most popular terms by ranking search interest definitions. This means they looked at searches such as “woke definition” or “define woke” to determine their rank. These are the top 10 words of 2016 based on their criteria: Triggered, Shook, Juju, Broccoli, Woke, Holosexual, Shill, Gaslighting, Bigly, and SJW. 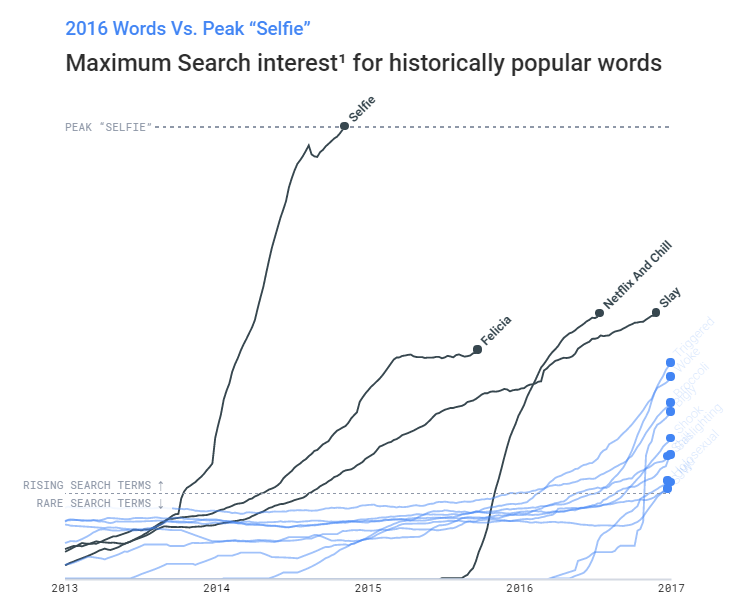 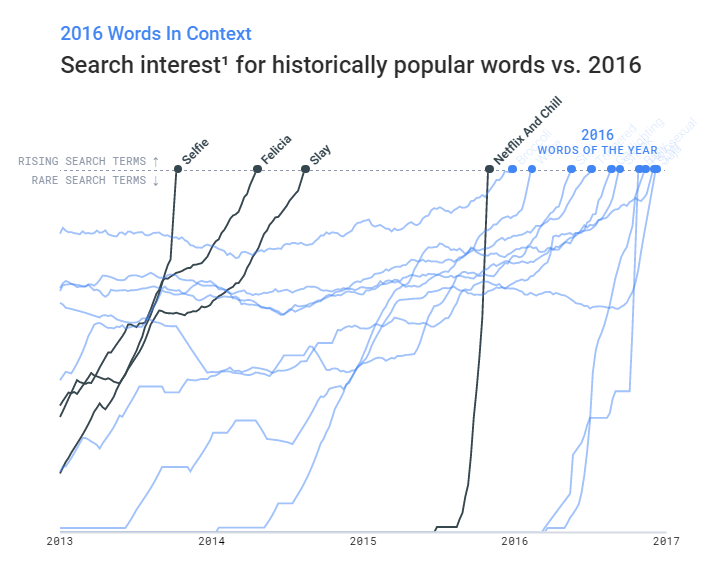 For the top trending definitions, they only looked at emerging words, or terms with minimal search interest in 2015 that steadily grew throughout 2016. This allowed them to eliminate established words such as “emoji.” During this time, each of the top rising definitions of 2016 managed to obtain a level of search interest to distinguish it as a common searching, meaning they were being searched as frequently as common English words. Terms from past years that have reached the same status would include “selfie” in 2013 and “netflix and chill” in 2015. Unsurprisingly, “selfie” is now one of the most popular definition on Google and so far, none of 2016’s top definitions have been able to reach the same popularity as “selfie.”

This interactive chart they created compares different popular definitions between 2013 and 2016. Clicking on each term produces a different colored line graph so you can see exactly how popular each word is relative to other popular words.

You can also see how each word has fared by state and how the search interest has changed since the beginning of 2015. This chart allows you to see what definitions are more popular in certain areas. For example, “ woke” only peaked in the northeast and west while “wavy” only ever took hold in Virginia.

Be sure to head on over to their project site to learn more. And if you haven’t already, check out The Rhythm of Food.