The Truth About Oil And Gas In The United States

According to data collected by Drillinginfo, there are currently over 900,000 active oil and gas wells in the United States, with more than 130,000 of those well drilled since 2010. Unsurprisingly enough, the U.S. now produces the most petroleum products in the world. With President Trump’s plans to lift regulations and allow drilling on federal land, there are no signs that the oil and gas industry will be slowing down.

Texas has always been known for its oil fields, but advances in technology and pipeline infrastructure has allowed the oil industry to boom in other parts of the country. To better understand what that means, The Washington Post created a series of data visuals to show just how the oil and gas industry is doing across the United States.

While some oil basins, such as those found in Alaska and Eagle Ford, have started to see a decline in production, the Gulf of Mexico and Permian basin still continues to produce millions of barrels per day.

The Permian has been producing oil since the 1920s, with production peaking in the 1970s. Since then, oil production at other sites across the United States has seen a decline so companies have been fracking, a technique that combines hydraulic fracturing and horizontal drilling, to tap into the oil and gas resources at the Permian. 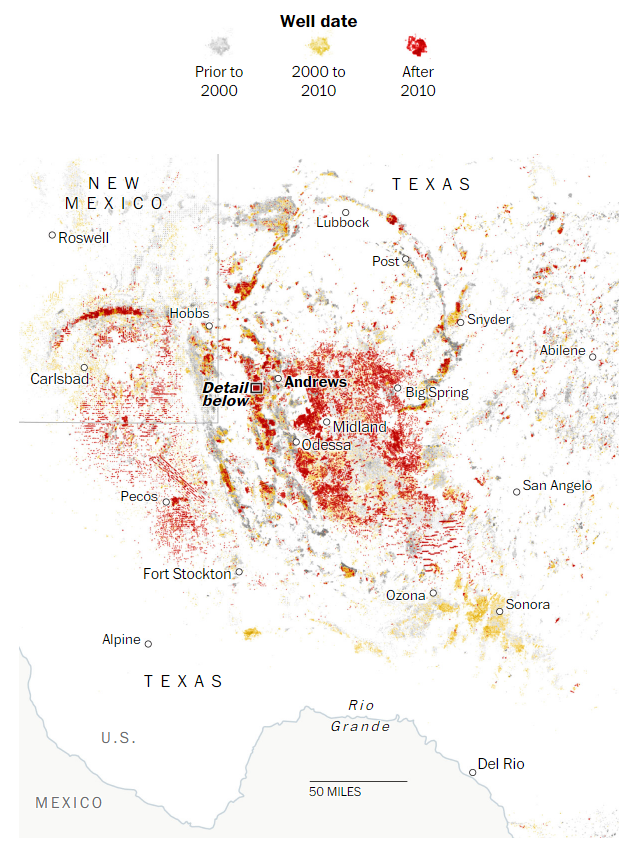 Many locations within the Permian geologic formation, such as Andrews, Texas, have seen an increase in wells in the last 10 years. Along with the addition of wells, Andrews County has seen a population increase of more than 30% since 2005 with similar surges occurring in other areas as well.

For a time, natural gas, traditionally a byproduct of oil production, was simply burned off. But back in 2002 in the Barnett shale near Dallas, Mitchell Energy established a new drilling process that is now commonly known as fracking. The procedure was done by drilling horizontally into the shale formations and shooting gas and liquid solutions into the rocks at a high pressure. This would cause fractures to form allowing oil and gas to flow into the drilling pipe.

This new method is what has been propelling the gas industry in the Marcellus shale region, an area that spans from Lake Erie to West Virginia and Kentucky. Fracking has allowed the gas in the region to be extracted more efficiently causing production to increase since 2010. Since then, thousands of new wells have been drilled and hundreds of miles of pipelines have been installed in the Marcellus region. 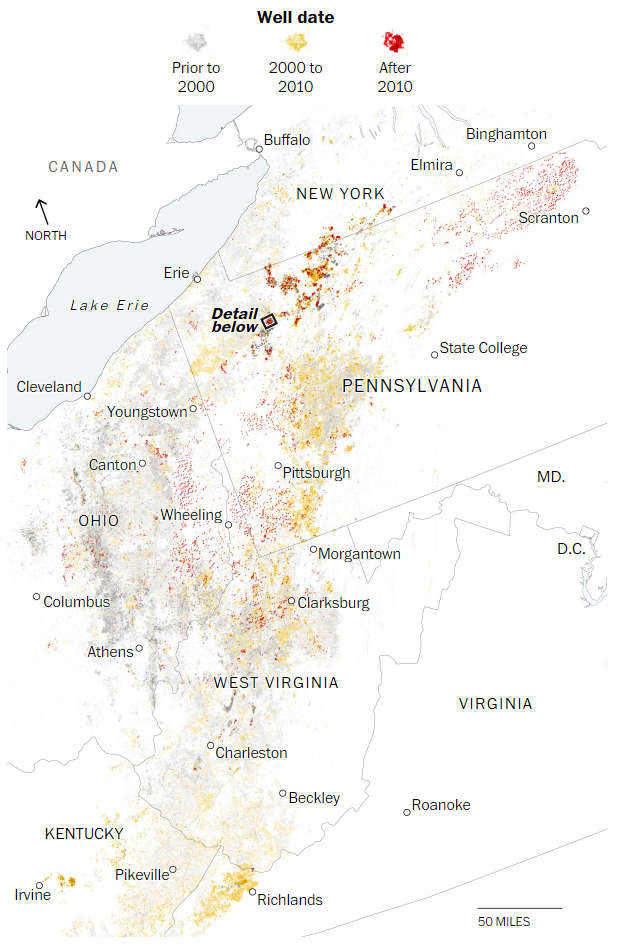 Forest County, Pa. has also seen an increase in economic activity after a spike in the number of wells in the area due to the drilling boom in the Marcellus shale. Since 2009, Pennsylvania has seen over 23,000 new jobs and an increase of $1.9 billion to the state economy. Unfortunately, most of the earnings from natural gas royalties and leases went directly to mineral rights owner, who account for only a small fraction of the population, which may be a contributing factor to rising income inequality in the region.

A question being asked more frequently is whether or not there are oil and gas reserves on federal land. President Trump believes there is and the trademark of his “America First Energy Plan” is the notion that those resources need to be utilized.

The federal government only owns about 28% of all land nationwide. The four agencies in charge of 95% of that land include the National Park Service, the Fish and Wildlife Service, the Bureau of Land Management in the Interior Department, and the U.S. Forest Service. The reserves, which are mostly out west, span a region from the Northern Plains to the Gulf Coast to the Appalachian Mountains. Even though the reserves account for a large stretch of land, there isn’t a great deal of overlap in the government-owned lands and the oil- and gas-rich geologic compositions. 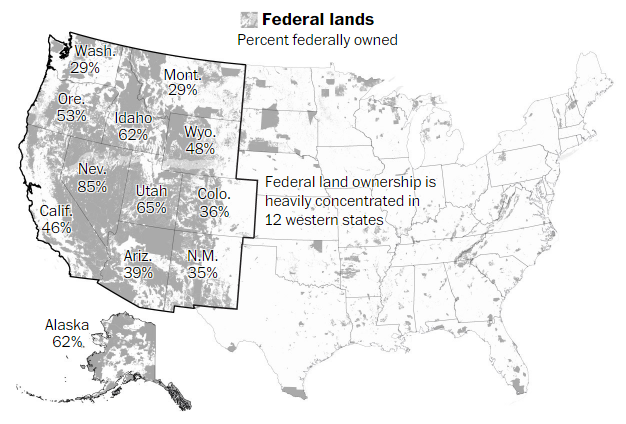 As of right now, the Bureau of Land Management allows some oil and gas exploration on the 247 million acres of land it holds in the West. But while drilling is permitted occasionally on federal reserves, only minimal amounts of oil and gas are produced. The same can not be said about oil and gas production in federal waters. For a time, production in the Gulf of Mexico has been prosperous until the rise of fracking brought down the price of drilling for natural gas on land. 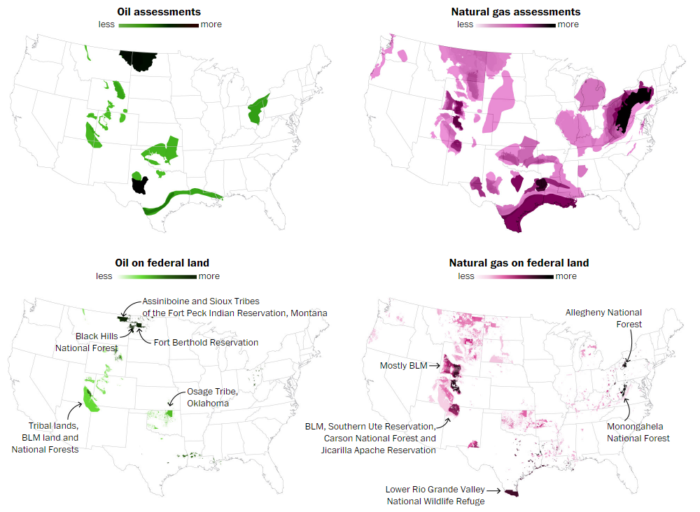 In order to drill in offshore federal waters, companies bid on leases that grant them the rights to oil and gas production. There are currently active leases off the southern California coast in the Gulf of Mexico and north of Alaska in the Beaufort and Chukchi seas, but as part of the Gulf of Mexico Energy Security Act of 2006, new leases will only be sold in the eastern portion of the gulf until 2022 and Cook Inlet in Alaska for the next five year.

Unsurprisingly, most of the United States’ oil framework is found along the western part of the gulf. This is because of its location near the oil and gas fields of Texas and offshore resources. The refineries built along the coast of Texas, Louisiana, and Mississippi process the crude oil and natural gas produced offshore which are shipped to the mainland via pipelines. 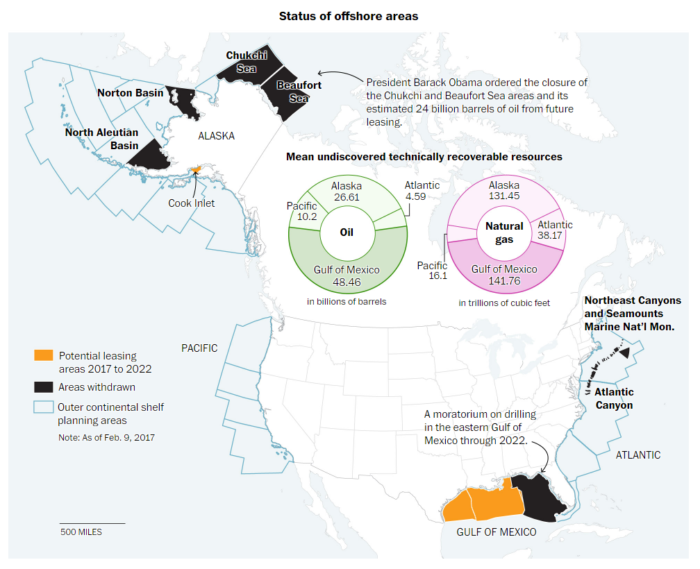 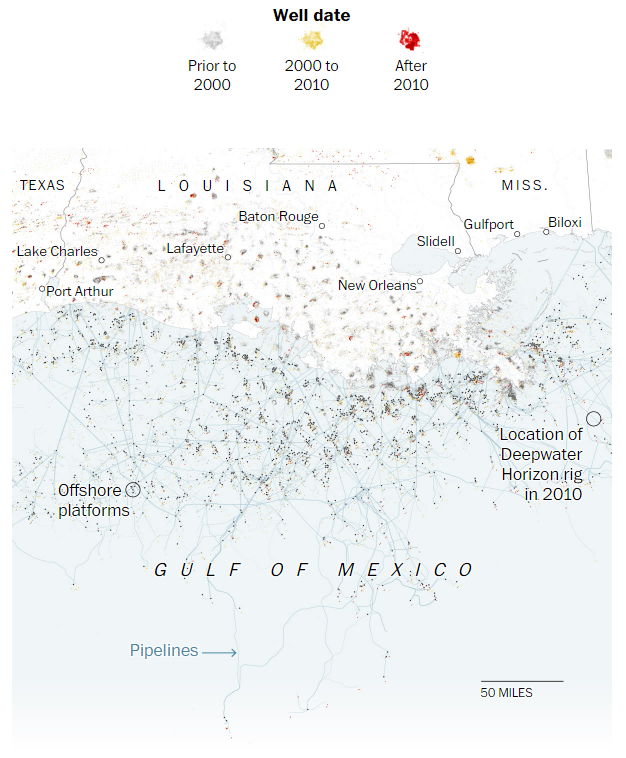 Oil and gas production is so massive in the United States that over 2.5 million American workers are employed by the petroleum industry. The industry is so large, in fact, that it is visible from space with NASA’s VIIRS satellite imagery. 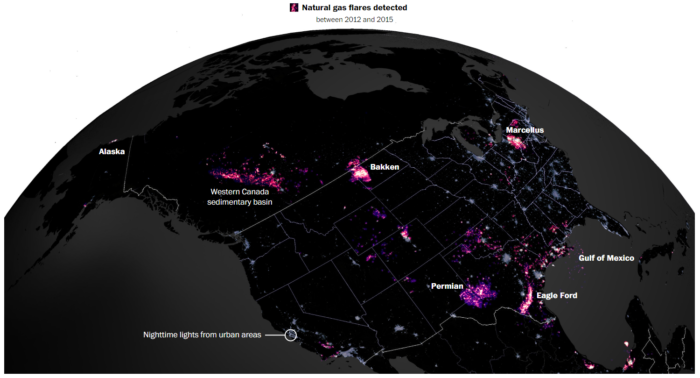