Get Your Smash On With This ‘Lemonade’ Inspired Game

In honor of Queen Bey herself and her many Grammys, some members of her Beyhive created a fantastic 8-bit game based on her music video Lemonade.

“Lemonade Rage” lets players assume the role of Beyoncé as she smashes through cars and haters, collecting lemons as she goes. The game is an automatic runner, meaning the character begins to move forward as soon as the game starts, and picks up speed as you progress through the level. You’ll also be faced with obstacles, such as haters and Illuminati conspiracy theorists, that you must avoid by using your arrow keys. As the game picks up speed, it gets surprisingly difficult as more haters block your path. 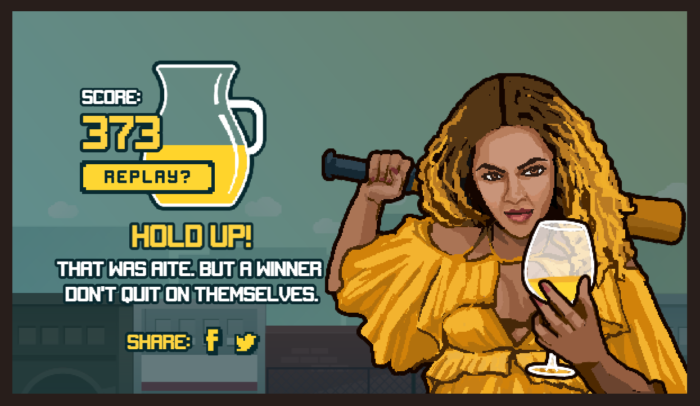 The game is the brainchild of Joe Laquinte, Justin Au, Line Johnson, and Colby Spear, three designers and presumably big fans of Beyoncé. The design of the game is reminiscent of Double Dragon, an 80s beat ‘em up video game, and the music, an 8-bit remix cover version of Hold Up by 8-Bit Universe, really makes it feel like you’re playing an old arcade game.

Try the game out for yourself here and let us know how you do!